Rory Gleeson’s Blood in the Dirt: The curse of a family bloodline

Is the novelist and screenwriter turned playwright fated to follow in his family’s footsteps? 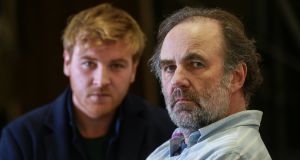 The explosion bursts directly overhead and sparks scatter across the thin roof of the rehearsal room. Lorcan Cranitch, bundled inside a coat and scarf, flinches again: “Fucking hell!” Across the table, the writer Rory Gleeson ducks automatically: “Jeee-sus Christ.”

We had been joking about it at first, but it now genuinely feels that we are under attack.

This is what you get, perhaps, for scheduling an interview on Halloween night in the middle of the city. It is almost certainly what you get for occupying the sole building with its lights still on in close proximity to a school ground. We’re an easy target. Boom.

So is Francis Donnelly, the protagonist of Gleeson’s first full-length play, Blood in the Dirt. An embattled farmer in North Tipperary facing imminent eviction, he has bivouacked himself in his barn after a desperate, defensive act. To prepare Cranitch’s freighted, frantic monologue about survival, handed down through several generations of a vexed family of Irish emigrants, Landmark Productions seem to have found a sympathetic rehearsal space; long and cluttered and currently under siege.

Gleeson, a novelist and screenwriter, imagined his character as “The last Donnelly”, a name that, in Irish-Canadian lore, represents a brutal inheritance.

In 1880, in Lucan, Ontario, five members of the “Black” Donnellys, known for Big Jim Donnelly’s tenacity and ruthlessness, were murdered by an armed mob of townspeople, and the family’s barn burned down, in the culmination of a 33-year, bitter feud.

In Canada, this saga – and there’s much more to it – has been the subject of several books (in both excitable versions and detailed histories) a couple of films and TV shows, quite a few plays (and at least one musical) and a clatter of songs. Outside Canada, you could be forgiven for never having heard of it.

Last year, over a much quieter Halloween, Gleeson and a friend decided to visit the site of the massacre themselves, in Lucan Biddulph. (Gleeson, who has permanent residency in Canada, divides time between Toronto and London.) “What you’re struck by there is that the land is just so flat, and when it snows there’s several feet of snow,” says Gleeson. “These days they can rely on ploughs to get through, but back in the day you’d be on the horse, or on foot. And people die in the snow a lot in Canada.”

In the play, Francis recalls his forebear given a stark ultimatum to leave the land, a blank stretch of wilderness, on which he has squatted. “Jim looks back at the cabin he’s made, and the first snow already falling upon it. If they move, they’ll die. Fuck yourself, Jim says.” So the legend begins.

Like most legends, though, both the tone and detail of the story change according to the teller, Gleeson found. “Anything I’d read about the Donnellys was either very high on the fun element of violence – ‘Big Jim Donnelly was a terrible man, who’d knock the head off anybody’ – or it was scolding: ‘These people were absolute savages who got what was coming for them.’”

If history is written by the victors, the authorship of certain legends can be equally self-serving. In strains of anti-Irish sentiment, Gleeson sensed something exculpatory for a town that had committed, “this completely mad act of brutality.”

“I’m obsessed with how people justify their own actions to themselves,” Gleeson continues. “How they convince themselves they were right. Because most people don’t want to admit that they’re wrong, or evil. I’m interested in how people tell their story, again and again, to make it seem reasonable.”

In Francis, he imagined a more complicated teller, a descendant of William Donnelly, the massacre’s lone survivor, and Una Carroll, daughter of a rival family defined, and disadvantaged, by decency. Could one voice, from this mingled bloodline, tell both sides of the story?

Cranitch is currently more focused on the demands of solo performance

Having played a gallery of Detectives, Inspectors, Sergeants and Superintendents on the screen – most recently in the BBC’s Les Misérables, and most indelibly, perhaps, in Jimmy McGovern’s Cracker – Cranitch is a character actor with a long history of law enforcement. To be on the other side, in the shape of Francis, hounded by eviction notices, and now hired muscle in balaclavas, might count as a change of pace. Letting his beard grow scraggly for the role, Cranitch is currently more focused on the demands of solo performance, though, his first in a distinguished stage career.

The play’s depiction of isolation is helpful to establish a mind set, he admits, in where a man haunted by a family history of resilience and dispossession finds himself making a last stand. “The great barren Canadian wilderness could be the great barren place I’m living in in north of Tipperary,” he reasons of the character, “because it’s only me. On a practical level, the isolation of a single actor on stage brings its own terror, to be honest with you. There’s nobody to bounce off. That’s a new one on me.”

Monologue plays are tricky for other reasons as well, beginning with the question of what compels a character to speak? Do they address the audience directly, like storytellers or confidantes? Do they unravel? Are they just talking to themselves?

It’s not entirely clear whether Gleeson has yet settled on an answer. His character sometimes addresses heavy bags of horsefeed, for instance, or another inert presence, as his speech becomes more staccato, more fractured, more desperate.

“We’re working on a bunch of different things with that,” admits Gleeson, who has stayed in close consultation with the director Caitríona McLoughlin. “In a way it comes out as him trying to explain himself, investigating his own ideology: What is it that I’ve learned that has led me to this point?” For a character who has avoided violence his entire life, but sees it as his inheritance, a fated snap down a rope, that becomes a pressurised consideration of destiny and free will. “One hundred and fifty years later, this violence has come back to haunt him.”

Both Cranitch and Gleeson are alive to other troubling echoes of history. “Take the recent evictions that have happened in Ireland today,” says Cranitch. “Whether [the occupants] are on the right side of the law or not, it’s the method with which [the evictions are] perpetrated which has become an act of violence itself.”

Indeed, while Gleeson was writing Blood in the Dirt, the news was crowded with grim reports from Dublin’s North Frederick Street clash to Roscommon’s violent Strokestown dispute. “The idea of people in power getting men in masks to go and do their work for them was certainly in my mind at the time,” remembers Gleeson.

“Is Francis now the modern version of his great, great, grandfather?” Cranitch draws his shoulders into a helpless shrug. “He has found himself in this awful position. He’s got 45 minutes before the police arrive, and actually take him away. And what does he choose to do? He calls on the ghosts of his ancestors, who are the only people that he’s been living with for the last few weeks. So this is the way I’ve been trying to get into the actual telling of it: these people come readily to him. They’re very, very present.”

Yet he doesn’t put the pursuit of new challenges down to something in his blood; it’s a decision

From Greek tragedy to Ibsenite naturalism and beyond, the idea of cursed generations, and sons guilty of their fathers crimes, is almost foundational in theatre. Gleeson has particular affection for one modern expression, The Walworth Farce, Enda Walsh’s alternately ludic and devastating work in which a tyrannical father makes his sons perform his warped life story daily, as though to make it real. The play was most recently staged by Landmark, featuring his father, Brendan Gleeson, and his brothers Domhnall and Brian. “The rest of them, basically,” quips Cranitch.

That Rory has now followed his family into theatre might seem genetically preordained too, but his play is more ambiguous on the idea of fate. “But we are not our blood,” insists Francis. “The world teaches us to be what we are.”

In Gleeson’s case, both are informative. His father originally encouraged him to write the play, he tells me, and later recommended he contact Landmark’s Anne Clarke. But his own sensibility is one of restless discovery.

A couple of years ago, at the age of 28, he began travelling in earnest: “Just moving, and writing, and seeing whatever I could,” he says. Similarly, he is exploring different forms in a hurry, moving quickly from published essays, to the 2017 novel Rockadoon Shore, to the 2018 film Psychic and now in 2019, the stage.

“In terms of changing form, it just suits my head,” he says. “I tend to get stuck and then I need to move around. Also, it’s just it’s great fun learning something new.”

Sincere and self-deprecating, when he tells me he finds this experience “terrifying – absolutely terrifying” I believe him. Yet he doesn’t put the pursuit of new challenges down to something in his blood; it’s a decision. And that might also be the legacy of the Donnellys, or, for that matter, the Cranitches, or the Gleesons too. “Yeah,” Gleeson smiles, “you’ve got to give yourself a boot up the hole. Everyday.”

Blood in the Dirt previews from November 13th and opens November 20th - 30th at the New Theatre, Dublin.