Hurling and history collide in The Red Iron, the company’s first production since 2014 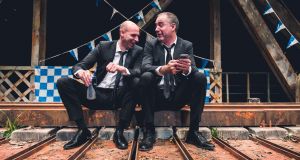 The Red Iron, a new play by Jim Nolan, is at the Garter Lane Theatre in Waterford until November 30th. Photograph: Colin Shanahan

THE RED IRON
Garter Lane Theatre, Waterford. Ends Nov 30 garterlane.ie
There’s a forlorn spirit and fighting resonance in the setting of Jim Nolan’s new play, marking the surprise return of Red Kettle Theatre Company, the leading independent Waterford company which closed for business in 2014. On Waterford’s Quay, in 2017, crowds gather to welcome home the county’s vanquished All-Ireland hurling team. Elsewhere, on the city’s long abandoned Red Iron Bridge, the former members of a teenage gang now reunite in middle age to remember their friend, a former hurling star, who has passed away. Writing a play set in his native town for the first time since his 1985 debut, The Gods are Angry, Miss Kerr, Nolan’s return to the company banner carries with it its own defiant attitude, beaten in the past, perhaps, but again unbowed.

That Nolan’s fictitious gang have a history that stretches back roughly as long as the theatre company he founded may be entirely coincidental. But the play, hinging on a revelation surrounding the circumstances of the hurling star’s death, and the unexpected return of one long-exiled associate, explores the ties that bind such a group together and the fragile nature of friendships that can dramatically unravel. Even the casting of this “new play for Waterford” makes a corresponding point, bringing home a number of London-based Waterford actors to form an ensemble including Brian Doherty, Michael Quinlan, Keith Dunphy, Jenny Ledwell, Greta Rochford and Neil Ditt. Taken together, that looks less like a wake and more like an effort to get something started.

How do you make a fairytale out of tyrannical censorship? In Bombinate’s playful production for family audiences, the petty ruler King Levi is a frustrated author who counters his own writer’s block by banning all stories. The kingdom of Levitas may be a repressive regime, but the person appointed Story Destroyer, Susie (Clodagh Mooney Duggan), thankfully proves to be irrepressible. Even with a robotic accomplice named Shredder (Mathew Malone, playing a retinue of characters) Susie’s natural impulse is towards creativity, festooning her workspace with ornaments and papier-mache made from the ribbons of stories. Rather than obediently mulching them, she now decides to read a story for the very first time, beginning a rebellious adventure.

Mollie Molumby and Ursula McGinn’s co-written, co-directed and co-designed show debuted at the Dublin Fringe Festival last year, following their award-winning debut Half Light, and now it provides their company with its second national tour. Praised for the audience appeal of its unabashed punnery and engaging physical display by reviewer Sara Keating in these pages, and also for the resonance of its moral and meaning of its follow-through, the show comes at a time when the limits to free expression are not fancies, but the background chatter of the adult world. One way to address such fears, it recognises, is to write them away.

Pat Hume: The woman who never gave up