The best theatre shows to see this week

Rory Gleeson’s Blood in the Dirt, and the Bockety World of Henry Bucket 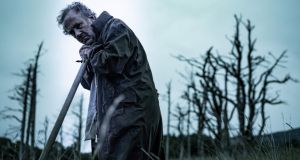 Lorcan Cranitch in Blood in the Dirt by Rory Gleeson. Photograph: Patrick Redmond

Blood in the Dirt
The New Theatre, Temple Bar, Dublin, until November 30th, bloodinthedirt.ie
Lucan, Ontario, 1845. Big Jim Donnelly moves to Biddulph, Ontario from his farm in Tipperary to stake a claim on settled land. Locals know there will be trouble. Thirty-five years later, he is murdered by an angry mob of villagers and his family is run out of town. The violent saga is a well-loved part of Canadian lore, and Rory Gleeson’s debut play brings an Irish perspective.

Set more than a century after the explosive events, Blood in the Dirt explores the true story through the eyes of Francis Donnelly, descendant of Black Jim, who has holed himself up in the barn of his farm in north Tipperary, from which he is about to be evicted. Invoking the ghost of his ferocious forbearers, he tells their story as well as his own. Gleeson is best known for his novel Rockadoon Shore, which places a group of contemporary 20-somethings in a situation of similar isolation: a rural lodge where they retreat for the weekend with as much booze as they can afford. Little do they know that they are being watched by a half-mad farmer named Malachy, who eventually reveals himself brandishing a shotgun, a prototype surely for the Donnellys we meet in the play.

The brooding Lorcan Cranitch plays Francis, under the direction of Catríona McLaughlin, known for her penetrating clarity on rural dystopias, like last year’s On Raftery’s Hill. With original music from fiddler Caoimhín Ó Raghallaigh and the production prowess of Landmark Productions, who have helped propel the other Gleesons (Brendan, Dómhnaill and Brian) into the theatrical spotlight, you can expect this production to travel far.

The Bockety World of Henry Bucket
Theatre Royal, Waterford, November 24th; Axis Ballymun, Dublin, November 26th; Backstage Theatre, Longford, November 28th/29th; Garage Theatre, Monaghan, December 1st, 2nd; An Grianán, Letterkenny, December 6th; Watergate Theatre, Kilkenny, December 9th, 10th; The Source, Thurles, December 12th; barnstorm.ie
I bet you remember the first time you fell out with your best friend. Barnstorm brings this universal childhood experience to the stage in The Bockety World of Henry Bucket. Having toured internationally, across the United Kingdom and the United States, it returns to Ireland with a string of dates at venues across the country.

Henry and Bucket live in a bockety world, full of discarded objects that are useless to everyone but them. They are such good friends that they can finish each other’s sentences. Most of the time they love each other, but even best friends can fall out over silly things. Writer Sarah Argent gently guides young audiences across a series of obstacles to harmonious relationships, allowing them to explore various avenues of resolution. Argent also directs the relatable tale, with the assistance of an inventive junkyard set from Carole Betera, playful sound design from Jack Cawley and warm, friendly performances from Paul Curley and John Currivan, your children’s new best friends.