The M House review: An abundance of ideas in an inclusive, inventive production

Dublin Theatre Festival: Authority, in Equinox’s witty play, is like a vertiginous ladder – there’s always someone on a higher rung 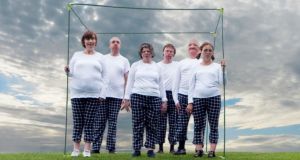 The M House: using a spindly boxy frame, the cast literally hold M House together, where the powers that be would rather see them stewing in daytime TV than dancing

Axis, Ballymun
★ ★ ★
Authority, in Equinox Theatre Company’s charmingly devised, witty and skilfully executed The M House, is like a vertiginous ladder: there’s always someone on a higher rung.

The people who live in M House – just one facility in a sprawling alphabetised institution – are overseen by a harried bureaucrat, Middlemanager (Susie Lamb). She in turn answers to absurdly officious board members, themselves deferring to an omniscient robot named Gal (more feminine than 2001: A Space Odyssey’s computer and no less sinister). But everyone is subservient to a suspiciously reassuring corporation, Apep, whose slogan – “We’ve got you sorted!” – is more chilling than it sounds.

There’s an abundance of ideas in this inclusive and inventive production, performed by an integrated cast of performers with intellectual disabilities and professional actors. Using a spindly boxy frame, they literally hold M House together, where the powers that be would rather see them stewing in daytime TV than dancing, later monitored in their own “Mpods”, pyramidal structures incorporating “state of the art Egyptian technology”.

Is it any wonder our motley crew prefer to break free? In that, the production’s director, Medb Lambert, provides them with an extended, wandering adventure, enhanced with sound and light, supported with both state-of-the-art theatre technology and a respectful approach.

That the performers’ vulnerability enhances the concerns of the play is both affecting and canny. But in this depiction of limits, media surveillance and a top-down world, which of us could not easily relate?