The Lieutentant of Inishmore: Synge on speed with bleak oneliners and rabid republicans

Theatre review: This is very, very funny with a good ensemble and an impressive one-liner count 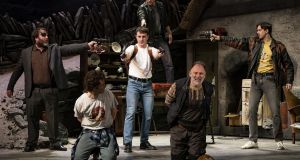 THE LIEUTENANT OF INISHMORE

Gaiety Theatre, Dublin
★★★☆☆
Beforehand there’s a standard announcement about interval drinks and merchandise, and you half expect them to sell stuffed, brained cats outside. Political sensitivities that might have been stoked by the outrageously black humour and casual brutality of republican paramilitaries onstage have dissipated since Martin McDonagh wrote The Lieutenant of Inishmore in the mid-1990s. The Northern peace is still delicately balanced, but this set-up of unhinged INLA gunners running ludicrously riot seems from another world.

Oddly, one gory and gruesome scene (no spoilers) retains the ability to startle because of its horrifying resonance for current drug gang crime in the Republic. After momentary shock, the cartoon violence and brilliant, dark comedy slip (mostly) back into the ascendant.

McDonagh’s satire on sectarian violence, set during the height of the Troubles, but mostly set in Aran, was first seen in Ireland in 2006. Andrew Flynn directs with gleeful, gunslinging confidence, in Owen MacCarthaigh’s cottage-and-hilly-boreen set, with Ger Sweeney’s striking and ever-changing backdrop of sea, sand and pier behind. A less literal set might have highlighted the surreality of the play’s premise and violence, but as it progresses that realism echoes the Synge-on-speed script; the man who thought he killed his Da, becomes a man who would kill his Da and countless others, in between wisecracks and screwball comedy and animal soppiness.

The plot revolves around the death of Wee Thomas, the cat of INLA criminal Pádraig, who’s “mad enough for seven people, “too mad to be let in the IRA,” does a line in chipshop bombings and toenail removals, and eshews “any social activities that don’t involve the freeing of Ireland”.

His father Donny (a joy to see Don Wycherly on stage again) and the gormless Davey with “girly hair” (Alex Murphy), a dozy doubleact, get tied in farcical knots trying to disguise the cat’s demise and prevent Mad Pádraig going ballistic. Along the way and roaming the Inishmore byways are Davey’s wild 16-year-old sister Maireád (Aisling Kearns), who’s perfected target practice on cows, and a comically squabbling INLA gang. There’s also lots of shoe polish, multiple stuffed cats (and one that looked alive), plenty of guns and stage blood, dismembered bodies and much talk of cat-braining and Ma-trampling.

It takes the absolute, unadulterated mick out of fanatical republicanism.

It’s also classic farce, allied with absurdist upending of normality, the sectarian criminals’ sentimentality about cats contrasting with their blasé approach to human degradation, torture and bloodbaths. “Happy cats or an Ireland free is it we’re after?”

Probably equally offensive to po-faced rabid republicans and mad cat lovers, by turns surreal and horrifying, this is very, very funny with a good ensemble and an impressive one-liner count. Nothing is sacred.