A night of swashbuckling Tchaikovsky 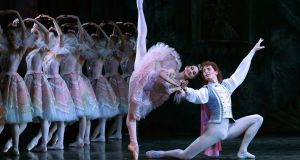 If Swan Lake is the most dramatic of the three Tchaikovsky ballets, and the Nutcracker its glittery counterpart, then Sleeping Beauty, with its equally exceptional music and choreography often lingers in the shadow of the beloved other two.

When Moscow City Ballet brings this triumvirate of Tchaikovsky ballets to Dublin, the company performs Swan Lake five times, the Christmas-themed Nutcracker once and Sleeping Beauty only once. For anyone seeking a night of swashbuckling Tchaikovsky and finely-tuned dancing, Sleeping Beauty’s the one to choose.

Ballet-lovers know Sleeping Beauty represents more than superficiality; Rudolf Nureyev helped launch his career in the West by interpreting the ballet’s Bluebird variation, and Margot Fonteyn and Darcy Bussell have leapt to fame by dancing the lead role, Aurora.

“It’s what made me want to become a ballerina,” says Rachel Victoria Hernon, principal dancer with Moscow City Ballet. “It was the Royal Ballet’s production I saw on TV when I was a very young girl, with a very petite Italian ballerina dancing the lead. Her very first entrance as Aurora made me want to be there on stage, so it’s a ballet that means absolutely everything to me. That first entrance when she comes to life, she’s so dainty and sprightly. And the music is just incredible.”

Perhaps in the current #MeToo era, a ballet featuring a somnambulant princess appeals less than one showcasing a steely swan, but dancers such as Hernon who have performed Aurora maintain a deep respect for Sleeping Beauty’s unerring technical demands.

“Throughout the story she is a young girl, though she does mature through the acts,” says Hernon. “At first it’s her birthday party where she’s meeting her suitors, and she’s a bit shy in the way she runs to the king and queen. Then we have the second act when she’s seen in a vision, and as a dancer here you have to be more serene. Then in the third act she’s getting married, so she’s more mature. Overall Sleeping Beauty is a very difficult ballet, because once it starts, you’re more or less onstage the whole time.”

The three-act ballet premiered in St Petersburg in 1890 and follows the storyline of Charles Perrault’s 17th-century fairytale. Some companies present the ballet in its entirety, including the prologue and three acts, but no matter the choreography, Princess Aurora always falls under the spell of an evil fairy that can only be broken by true love.

Moscow City Ballet’s interpretation showcases Aurora throughout the ballet, particularly in a famous sequence known as the Rose Adagio, during which her suitors line up to take her hand one at a time and present her with a rose. She remarkably balances en pointe as the men take turns stepping in momentarily to partner her, leaving her for split seconds to stay poised on her own. The dance requires exceptional strength, balance and stamina on the part of Aurora, and has helped make or break many a dancer’s career.

Yet unlike some of the other 19th-century ballet classics, Sleeping Beauty offers other roles nearly as coveted at that of the princess. The Lilac Fairy leads a gathering of other fairies in solo or small group dances called variations, that have become as adored as those from the Nutcracker’s Kingdom of Sweets. The fairies must reveal their characters through their steps, and perhaps refreshingly for anyone who tires of the pantomime in classical ballet, Sleeping Beauty exchanges that drama for intricate footwork, so that the fairies offer some of the best dancing in the entire classical ballet repertoire.

“Each one has a different temperament, and they are each giving a different gift to Aurora,” says Hernon. “The choreography is so precise, that even if you don’t know the names of the fairies, the temperaments of them and what they’re giving to Aurora is so clear.”

With the potential for such superb choreography, Sleeping Beauty features in the repertoire of every major ballet company. In 1921, after Diaghilev’s Ballet Russes brought it to London for its western premiere, other companies such as Sadler’s Wells Ballet and later the Royal Ballet created their own productions. It has been performed internationally by companies from Australia to the US ever since.

Through the years, although Swan Lake and the Nutcracker been interpreted numerous ways – from Matthew Bourne’s male Swan Lake cast to Mark Morris’s Hard Nut spoof on the Nutcracker – Sleeping Beauty has remained relatively unchanged when presented through dance. English choreographer Ben Stevenson expands his version to more than three hours with three intervals, and Russian-American choreographer George Balanchine’s Sleeping Beauty notches up the glamour with glittering patterns of dancers. But rarely does a ballet interpretation of Sleeping Beauty defy convention so that a man takes the lead role or the story completely changes.

In this way it sets itself apart from the two other ballets first choreographed by Marius Petipa to Tchaikovsky’s music. It also embodies the kind of cultural export Russia has prized for decades, showcasing the country’s famous artform without striking overtly political tones. Sleeping Beauty may explore themes of good and evil but it never propagandises, which some might argue happens with ballets such as Yuri Grigorovich’s Spartacus, for instance. That ballet was created in 1968 in the wake of the 50th anniversary of the October Revolution, and was sanctioned by Soviet officials knowing the West was looking at how their artform was progressing. So they allowed the Bolshoi Ballet to perform this dance full of soldiers and rebels in order to signal that Russian ballet was moving ahead with the times.

The ballet steers clear of any unwanted cultural themes that as recently as 2017 have brought Russian ballet into a less than desirable spotlight. That year the Bolshoi premiered a little-known full-length ballet called Nureyev, positioned to be an international sensation given that dancer’s place in history. However, the ballet portrayed Nureyev’s relationship with his partner Erik Bruhn and supposedly included veiled criticisms of the government, so its opening night was postponed by the Bolshoi management who cited the need for more rehearsal time. Meanwhile, the production’s avant-garde director Kirill S Serebrennikov had previously been placed under house arrest for allegedly fraudulent financial dealings on another project, and remained unable to attend Nureyev’s opening night.

So even during times when touring companies such as Moscow City Ballet present what ostensibly appears to be artistic openness, it is hard to know how much these touring companies reflect what’s happening with ballet in Russia today.

Certainly more Russian-based touring companies exist now than did 20 years ago, and many have embraced openness with the West through hiring foreign dancers and even using European cities as their bases of operation. Martin Taylor, tour manager for Moscow City Ballet, says the company uses Poland as a site for storing equipment, scenery and costumes.

“It’s clever because it means they don’t have to jump through the hoops to get all their stuff out of Russia, which is a huge logistical and bureaucratic nightmare,” Taylor explains. “So they have a base in Poland for now, which helps when you’re going to somewhere like Ireland. When we travel to the UK, it’s okay for now, but with Brexit we don’t know how it’s going to affect us.”

A London native, Taylor studied Russian literature in Moscow, which unexpectedly led to his career working behind the scenes with touring Russian ballet companies. He has also worked on tours with the Bolshoi and Kirov, and could likely write a book on what he has experienced backstage. However, he says that he becomes so engrossed in the logistics of getting 50 dancers and 40 orchestra members from one tour stop to the next that he hasn’t time to recount many stories.

Backstage Taylor sees Russian artistry up close, not just in dancing but also in a ballet’s music, costumes and sets. Moscow City Ballet still uses the enormous hand-painted cloths in the style traditionally created for ballets in the 1800s.

“The Russians can still paint a cloth, and it is not like painting a portrait,” he says. “You have to do subtle things so that when it becomes lit, it’s an illusion. It’s a fantastic skill, and I hope it doesn’t get lost.”

The alchemy of handmade costumes and sets, exquisite dancing and live music has drawn audiences back to see the same ballets over and over again. Regardless of new interpretations of these classics or the societal changes surrounding them, they endure.

Sleeping Beauty’s highest praise may indeed have come from Tchaikovsky himself, whose letter to a friend in 1890 after the ballet had been staged said, “I wrote it improbably quickly, yet Sleeping Beauty may be the best of all my compositions.”

Matthew McConaughey: ‘Everyone’s in a bit of a pickle, and it’s not a little gherkin’
4