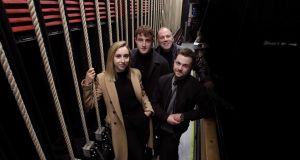 From right, Alex Murphy, Don Wycherley, Paul Mescal and Aisling Kearns from the cast of the Gaiety’s production of Martin McDonagh’s The Lieutenant of Inishmore. Photograph: Mark Stedman

In a grim room in the grounds of the Leinster Cricket Club in Rathmines the windows curtained against the darkening sky, a strange scene is unfolding. Two men are puzzling over a blue stuffed monkey. “Do you think he’s dead, Donny?” the younger one, Davey, asks. The older man raises a well-furrowed brow. “Aye.” “He might be in a coma. Would we ring the vet?”, Davey suggests hopefully. “It’s more than a vet this feck needs,” is the terse response. “If he gave him an injection,” the young man wonders. “Have this injection you,” responds the older man, stepping back and giving Davey “a kick up the arse”.

Davey is outraged by the assault, but it is the flaccid blue monkey, lying prone on the kitchen table like a corpse at an autopsy, who demands our attention. If the bizarre assemblage of props in the background – a child’s bike with flat tyres and a distinctly squeaky chain, a pellet gun, and a box of Frosties cereal – don’t give the game away, the dialogue does. This could only be a scene from a play by the inimitable Martin McDonagh.

Some people might still think it’s taking a cheap shot at the Troubles, but other people will think differently

McDonagh’s 2001 play The Lieutenant of Inishmore is one of his lesser-known works in Ireland, where much of the critical conversation around his earliest work was whether he was, indeed, an Irish playwright.

The play was written during that intense period in the mid-1990s that saw the prolific writer produce The Leenane Trilogy and The Cripple of Inishmaan. However, it took a while for McDonagh to find a home for it. He had originally offered The Lieutenant of Inishmore to Druid Theatre, following its successful staging of The Leenane Trilogy. However, director Garry Hynes passed on it, perhaps because of its political sensitivity. The play is set during the height of the Troubles and takes a satirical look at sectarian violence; staging it then would have coincided with the tentative beginning of the Good Friday Agreement.

It was director Andrew Flynn, who worked with Hynes as an assistant on The Leenane Trilogy, who eventually staged the Irish premiere in 2006. That first Irish production of The Lieutenant of Inishmore was an ambitious touring co-production between Galway’s Town Hall Theatre, the Cork Opera House and the Millennium Forum in Derry. However, the Derry leg of the tour almost didn’t happen, although not for political reasons, as Flynn explains. “We were right in the middle of rehearsals one day when Mike Diskin [then producer at the Town Hall Theatre] came in saying there was an urgent phone call from London. An agent had called saying we weren’t actually allowed to do the play in Derry. Apparently Martin didn’t hold the rights for productions of the play in Northern Ireland. His agent told us that Martin had lost the rights to David Wilmot [lead cast member in the original RSC production] in a game of poker, but thankfully it all got sorted.”

Even so, the production had a very different temperature during the run at Derry’s Millennium Theatre, as Flynn acknowledges. “When we landed in Derry someone sent a parcel to the theatre to us, this sinister painting, like something you’d see on a mural in Belfast in the 1980s, with black crows and guns, saying ‘good luck to the cast’. We certainly didn’t feel unsafe,” he elaborates, “and I really didn’t think that the production would cause trouble, but I do remember that first night in Derry, feeling like we had never performed it before, and at the interval walking out into the foyer to see what people were making of it. I remember one elderly man saying ‘that cuts fierce close to the bone’. And that’s the thing with all Martin’s work: he likes to make you a bit uncomfortable. Because the work is funny, it can become panto very easily, but if you aren’t feeling uncomfortable, if the actors are playing it for laughs rather than playing it real, it just doesn’t work.”

Fourteen years later Flynn is delighted to return to the play with a new large-scale production at the Gaiety Theatre in Dublin. Ireland has changed massively in the intervening years. Northern Ireland is no longer as riven by terrorist violence, its politicians have managed to maintain a peaceful accommodation, despite acrimony. The DUP and Sinn Féin have just agreed to resume their powersharing agreement in Stormont.

As Flynn observes, “Ireland is a very different place than it would have been during the peace process. It is easier, probably, to accept some of the things that 20 years ago would have caused controversy. But that is what Martin was trying to do. He wanted to write something about violence and something that would shock; something that would show violence in a shocking way. Some people might still think it’s taking a cheap shot at the Troubles, but other people will think differently.”

Indeed Flynn is not particularly interested in the politics of the play but in its human dynamic, in the relationships between the characters and the relationships between the cast. “Simply because it’s a different cast,” Flynn says, “it’s going to be very different production, because every actor brings something totally different than the one who played it before. I don’t come in with an idea of something I want to say, or something that I want the play to say. The actors just get up and do it, and I take what they give and help hone it into something we hope will be great.”

Actors Alex Murphy (the guileless Davey) and Don Wycherly (Donny, father to the play’s terrorist, Mad Padraig) are optimistic they will be able to turn their dog-eared, highlighted scripts into something genius.

On a break from rehearsing the bizarre opening scene, they trade insults, half in character. “I’m the oldest one here,” Wycherly says with mock ruefulness. “And I’m the youngest,” Murphy counters smugly. Wycherly interjects: “Look, I don’t know how that came about but that’s reality. The other [cast members] will get up to give me chairs.” As if on cue, Murphy offers him a seat with a chivalrous flourish. The playful, ribbing banter goes on.

Despite the animosity of their characters towards each other, however, the pair have been collaborating on the play’s biggest challenge – learning lines. “Oh it’s very liney,” Wycherly says, borrowing typical McDonagh expressions to enliven his complaint. “Yes, it’s just a biteen tricky to learn.” To help, he and Murphy have been using voice recordings on WhatsApp to run lines outside of rehearsal. “So instead of me talking to myself until I break down,” Wycherly jokes, “that one can give me my cues.”

Indeed, when Flynn gives notes, they are almost entirely about words missing here and there. “You have to be hard on paraphrasing,” he explains, “because as Martin famously put it himself to an actor who shall remain nameless: ‘every line I wrote is better than the one you are saying’, which I suppose is a subtle way of saying learn the lines.”

For now, however, all the focus in the room is on that floppy blue monkey, who, by the way, is only standing in for a cat who has yet to join the cast for rehearsals. Intrigued? Welcome to the world of Martin McDonagh.