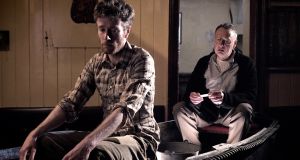 Ronan Fitzgibbon’s Blackwater Babble is built from the bones of a ballad. Its unnamed hero has marked his life out in singsongs, sailing up and down the Blackwater River, hoping to find the formula for storytelling through song. Fitzgibbon sets the play in a boat, but the pub is the real site of action. Indeed, when the play premiered as part of Cork’s Midsummer Festival in 2018, it was performed in Callanan’s Bar in Cork city centre. Now it has been reshaped for a national theatrical tour, but the pub is still at the heart of the play. It is the space where Fitzgibbon’s Everyman finds and exercises his inspiration.

The play is essentially a dialogue between an older and a younger man; the same man playing different versions of the self. The young hero (John McCarthy) is so consumed by song that he cannot stand back to experience life; the older man (Gary Murphy) is so consumed by regret for all that he missed that he cannot enjoy his last days. Together, they plunge deep into the particular cadences of regret, memory, masculinity and purpose in the vanishing world of the Irish pub and its singsong sessions.

What would Charles Dickens have made of the modern world? This is not quite the question that Irene Kelleher asks in Gone Full Havisham, but in her Dickens-inspired solo performance piece, she uses the Victorian writer’s most memorable heroine, Miss Havisham, as an ironic hashtag that spotlights the way in which mental illness is played out and often celebrated in the social-media saturated world. She paints a portrait of the jilted bride that Dickens would never recognise but which nonetheless resonates with authentic spirit.

Emily Halloran is our contemporary Havisham. Having been dumped at the altar five months ago, she has locked herself in her bridal suite, performing her misery for millions of followers, who get to decide just how functional she will be. Director Regina Crowley collaborates with sound and video designer Cormac O’Connor to give the performance an edgy installation feel, which Kelleher’s visceral performance enhances. Suitors will certainly think twice about abandoning their fiances after witnessing this madness.