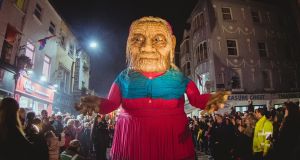 The award recognises the contribution of the company to Irish theatre culture and practice over more than three decades. The awards will be presented at the Irish Times Irish Theatre Awards ceremony in April.

“The contribution made by Macnas to Irish culture over the past three decades has been immense,” said Hugh Linehan, arts and culture editor of The Irish Times. “In bringing the European tradition of street theatre to the streets of Ireland, it awoke a spirit of carnival that had long lain dormant. Macnas has been a standard-bearer for community outreach and inclusivity in the arts, and it seems particularly appropriate in the year that Galway is European Capital of Culture to acknowledge its central role in the creation of the city’s vibrant creative landscape.”

Macnas artistic director Noeline Kavanagh said of the award, “It’s like the Sam Maguire of the arts. An all-encompassing award acknowledges Macnas’s relationship with the community, and its audience and its artistic ensembles.” She was pleased “artistry and invention are recognised as an artform as well as an entertainment – [they are] both. It’s a way of life being recognised. I don’t work alone. I’m very conscious of the supportive, amazing creative ensembles of Macnas, and wider public participation and community casts – that’s who the award is for”.

Kavanagh said, “Through many peaks and troughs the company has had an evolution that has allowed it to cross many different genres, helped by different visions and ensembles”.

Inspired by a visit to Galway by the Spanish company Els Comediants, Macnas was founded in 1986 by Páraic Breathnach, Tom Conroy, Ollie Jennings and Pete Sammon, who pioneered a genre of anarchic, visual street performance in Ireland, and went on to inspire other Irish companies such as Spraoi and Buí Bolg.

Macnas first came to national attention when a 21m-long Gulliver washed up on a Dublin beach as part of the city’s 1988 millennium celebrations. Over the past 34 years Macnas has had different eras and styles, surviving and reimagining itself through challenging economic times, changing cultural landscapes and different creative leaders. It created an original voice in Irish theatre with a style that is visual, physical and inventive.

Macnas supported U2 on its Zooropa tour in 1992, bringing its distinctive “big heads” around Europe. It rang in the millennium in 2000 simultaneously in Gaway, Dublin and New York City, where it floated a giant baby over Times Square.

Its roots on Galway streets presenting outdoor shows were seen in its Sunday afternoon parades, for years a fixture of the Galway Arts Festival. Since 2012 it has instead had a night-time Halloween parade in Galway and in Dublin. Indoors, its shows have included Alice In Wonderland, Treasure Island and Circus Story for family audiences, as well as its Celtic Trilogy, Táin, Buile Shuibhne and Balor.

The nominees for the 23rd Irish Times Irish Theatre Awards, for work produced in 2019, will be published on Saturday. The ceremony, in association with TileStyle, will take place at the National Concert Hall in Dublin on April 5th.