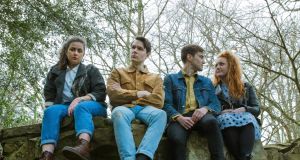 On February 13th, 1981, 420 teenagers gathered to celebrate Valentine’s Day at the Stardust nightclub in Artane. By the following morning, 48 of those amorous adolescents had died after the nightclub caught fire. Almost four decades later, following a State inquiry and several independent investigations, the cause of the fire remains unknown. What is indisputable, however, is the scale of damage; the young lives taken and affected irreparably by the incident.

In her debut play 48, Gemma Kane has created a theatrical investigation into the human side of the tragedy. The play splits the story across four characters, friends who travel together to the nightclub full of expectation, but whose lives are changed in a more fundamental way than they could have ever imagined by the horrific events that unfold.

Kane’s own parents were survivors of the fire, but Kane steps back from their personal story (how her father’s planned proposal was postponed when the fire broke out) to provide a more rounded portrait of a community and the role that the Stardust played in the young people’s lives: a centre of hope in an economically depressed Dublin.

Through the four distinct characters, Kane also presents us with a vision of society on the cusp of change, of youth paralysed by unemployment who determined to challenge the status quo. The acidly humorous script juxtaposes their daily routines in the weeks leading up to the tragedy – bickering with each other, justifying their decisions to parents, entertaining themselves – with expressionistic snapshots of the event and its aftermath: the panicked calls to emergency services, the charred moustache of an attendant Garda. The result is to reflect a culture as much as an event.

An original soundscape from Dylan Tonge Jones gives 1980s beats a haunting undertone, while popular songs from Blondie and The Carpenters provide a specific sense of authenticity. First presented at Smock Alley Theatre last year, the No Deserts production begins a limited tour this week, with Laurence Falconer, Emily Fox, Gemma Kane and Niall O’Brien starring, under the direction of Clare Maguire.