The incredible but true stories of Mark Smith 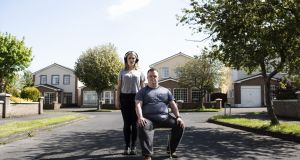 Actor Mark Smith and Aisling Byrne, his friend and longtime collaborator. “Mark has an amazing story. A lot has happened in his life. He has done some amazing things”

You may not have heard of Mark Smith, but the actor is a celebrity in his hometown of Celbridge, just outside Dublin.

“One analogy,” he says on a break from rehearsals for Making a Mark, a piece of documentary theatre about his own life, “is if I go into Centra to get a cup of coffee, when I come out there could be 20, 30 people waiting outside to talk to me.”

Aisling Byrne, his friend and longtime collaborator, shakes her head, laughing. “Diva! It’s more like a handful. But there could be 20 or 30 people stopping Mark in a day. Everyone knows him, and wants to say hello. It’s fistbumps and handshakes all through the town.”

Smith first discovered his love of acting as a child, developing his talent at speech and drama with George McMahon and Devon Murray, who went on to star in Fair City and the Harry Potter films respectively.

Smith would love “more than anything to be famous. To get a job in the soaps. Fair City, to start, or Mrs Brown’s Boys, though I’d like to move to bigger things, like Law and Order: SVU.”

However, as an actor with intellectual disabilities the opportunities for any kind of professional work are extremely slim, as Byrne, who has worked with Smith for more than 10 years, explains. “It’s always been really clear to me that Mark has a special gift as an actor, but there aren’t many opportunities for him to explore it. It’s not just about people with a disability having visibility, but about people like Mark being nurtured and supported to have a platform to develop their talent.”

Byrne is the artistic director of Run of the Mill Theatre, which was established at the St John of God’s service in Celbridge to make work for the stage with its service-users. Smith has been involved with the company since its inception, playing various roles over the years, including the title role of King Lear on the stage of Draoicht Theatre in Blanchardstown in 2016.

The seeds for Making a Mark, which premieres at the Project Arts Centre on September 12th as part of the Dublin Fringe Festival, were sown in the wake of that production.

“It was a massive role for Mark, and a really a pivotal role in his development as an actor,” says Byrne, who directed him in the role. “So it was majorly significant for him, and there was a big comedown from that. Wasn’t there, Mark?” she offers, careful not to talk on Smith’s behalf.

Smith responds by silently nodding his assent, and Byrne continues. “I was a bit worried about how we would find something to artistically fulfil him after that.”

As well as her work as a drama facilitator, Byrne is a founding member of the theatre collective Talking Shop Ensemble, which has used a documentary practice to explore a variety of social issues on the stage since their establishment in 2008.

In the wake of King Lear, Byrne was starting work with the ensemble on RAPIDS, which focused on the HIV crisis in Ireland. Discussing the project and the company’s documentary approach with Mark one day, “he said ‘why can’t you make a show about me?’ And I thought, yeah, why not? Mark has an amazing story. A lot has happened in his life. He has done some amazing things.

“But it is actually not just about that. Mark has had his struggles as well, and not all of it has to do with having an intellectual disability. People tend to think of [people with intellectual disabilities] as being very one-dimensional. Especially people with Down Syndrome. There is this idea that they are happy all the time, and there is definitely a pressure, socially and in general to be happy.”

Mark interjects, “definitely, there is, yeah.”

“So I suppose we thought if we did a show together,” says Byrne, “we could show a different side to his life than people might expect.”

Smith does indeed have some incredible stories to tell. He won a silver medal at the World Special Olympics in 1999, graduated “on all 14 points” from Maynooth University’s anthropology department, and was Ireland’s LipSyncs Battle champion in 2017. He also holds down two part-time jobs while acting in his spare time.

Like many adults with Down Syndrome, he has experienced a variety of physical challenges, battling cancer as well as other weight-related health problems.

So the material for a dramatic story was certainly there, OByrne believed. However, more importantly, working with him as part of Talking Shop Ensemble would give Mark his first opportunity to work in a professional capacity.

When they decided to start working on an autobiographical show, Smith and Byrne applied for the Playground Residency run by Arts and Disability Ireland and axis: Ballymun, a bursary for artists with disabilities.

As Byrne explains: “This sort of a residency would usually support an individual artist with studio time, and that obviously wouldn’t have worked for Mark, so I approached [axis]on his behalf and asked if they would be open to allowing him to work with mentorship.”

Byrne and her Talking Shop collaborators became Smith’s mentors for a year. They spent the year together exploring autobiographical performance and documentary theatre practice. Soon the reality of “a show about me! Finally!”, as Mark calls it, with the particular glee he reserves for tongue-in-cheek self-celebration, began to take shape.

In the theatre space at axis, where Talking Shop Ensemble is rehearsing, the atmosphere is both giddy and serious at the same time. Smith is delighted to have an audience member, while Shaun Dunne, writer and director of the show, is keen to maximise their time.

The script for Making a Mark is based upon conversations that Dunne had with Smith over the last 12 months. “It’s all based on real life material and conversations that I recorded with Mark,” he says. “My role was to artfully translate what he said, to put structure on it.

“We decided early on that it would take the form of an interview and the idea of an interview seemed fitting, because it really complements Mark’s interest in celebrity culture. He has been interviewed a lot over the years. Because he is so verbose he is often called on to be a spokesperson for his community. So it made total sense for us.”

What surprised the collaborators, however, was that Byrne would appear in the show too. She explains the reason and the significance of her presence on stage.

“Doing a solo show, for any actor, is really challenging. It’s a mammoth task, and we just wanted to make sure Mark was fully supported in the telling of his story, in every way. We want him to be as comfortable as possible on stage, so that he doesn’t have to worry about anything but what he needs to do.”

Before breaking for lunch the pair rehearse a scene that demonstrates just how crucial the concept of their friendship and collaboration over the last decade has been to the development and expressions of Smith’s creativity. Byrne is asking Smith a series of questions. As Smith answers tersely, he starts taking off his jacket, then his shoes, while Byrne moves closer to receive and put them on.

Dunne interrupts the flow of the action to make a suggestion.

“Aisling put your hand on his shoulder, and Mark look at her when she does this. You are giving Aisling a bit of yourself to share. You are giving her permission to tell your story.”

Making a Mark runs from September 11th-14th at Project Arts Centre and at Axis Ballymun on September 17th as part of the Dublin Fringe Festival.

Correction: an earlier version of this article did not name Aisling Byrne correctly