Audience participation is the worst performance trend since human sacrifice

Donald Clarke: Some of us are quite happy being bad sports. Now get away from me 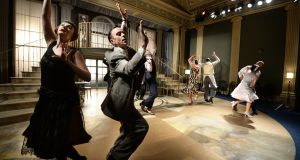 The Great Gatsby at the Gate invited punters to dress as flappers when attending. Photograph: Dara Mac Dónaill

Who do you think you’re looking at? No, I am not coming up on stage. No, I am not contributing to your improvised monologue. Sing a song? Sod off. Which of us is being paid to do the entertaining here? I forked out cash to see you make a fool of yourself (okay, I probably didn’t, but other people around me did).

Audience participation is the worst thing to happen to performance since the Teotihuacan people embraced human sacrifice. The beheaded got off lightly. They could have been asked to wear a leprechaun’s hat and play the fall guy to an experimental comedian. Get away from me!

These shudders are prompted by the news that The Wolf of Wall Street, Jordan Belfort’s memoir of boiler-room decadence, is about to be turned into an “immersive” theatrical experience at a secret London location. Like “heart-warming” or “visionary,” “immersive” is one of those words that cause me to reach for Göring’s apocryphal revolver. I’m unreasonable that way. Directed by Alexander Wright, who invited punters to dress as flappers when attending The Great Gatsby at the Gate, the show “allows theatregoers to become either a crooked Wall Street trader at the prestigious firm Stratton Oakmont or sign up with the FBI to investigate the firm’s illegal activities”.

During classical music performances of old, people didn’t just clap between movements – they arm-wrestled and let off firecrackers. Well, they also crapped in the street and died in their 20s from paper cuts

Audience members are asked to wear “1990s American office attire” and amble around period-perfect bars and restaurants. If you’ve seen Martin Scorsese’s endless film version you’ll have some idea what went on during Belfort’s decline. Abuse of little people. Cocaine ingestion. The showering of naked women with banknotes. What was it the Victorian lady probably didn’t say after a performance of Antony and Cleopatra? “How unlike the home life of our own dear queen.”

The description reads a little like a murder-mystery weekend. Middle-aged divorcees fight off depression by travelling to a country house and pretending to be the dowager with a murky past. Those things sound painful, but you do get to eat dinner during the entertainment. Also, there’s no risk of a punter accidentally signing up for unwanted audience participation.

Theatre boffins will argue that the tradition of sitting silently while the play unfolds behind an invisible fourth wall is a relatively recent innovation. You know how this discussion goes. When Othello was first staged, attendees milked goats in the stalls and threw rotten turnips at Iago. Much the same was true of classical music. They didn’t just clap between movements – they arm-wrestled and let off firecrackers. Well, they also crapped in the street and died in their 20s from paper cuts. So, I’m not taking any lessons from those ancients. The formal conventions – stay in your seat and shut up – were just one way in which we became more civilised during the 19th century. Then it all went to pot in the 1960s.

Theorists had, for decades, been banging on about reaching out to the audience. Such maniacs believed that blurring the lines between those who pay and those who get paid counted as an act of democratisation. This notion went mainstream in the groovy era. At the close of the supposedly ground-breaking musical Hair – a smash on Broadway and in the West End from 1968 – audience members were invited on stage to participate in a “be in” with the scantily dressed cast. From then on you were always at risk of an actor inviting you to throw pies at the Fool, give Hedda Gabler a comforting hug or tell everyone in the auditorium your childhood desires.

The most distressing experience I have ever endured in a public place happened during a one-man show at the Dublin Fringe Festival. Within minutes of sitting down, it became clear that the performer demanded audience participation – shouting, dancing, contact with strangers – and that he had singled me out as a bad sport. He dedicated much of the following hour to a class of creative humiliation that would have gained applause from Flashman in Tom Brown’s School Days. There was actual pointing and laughing. My only revenge – he was too gifted to earn a bad review – is making these comments some years later.

Let us be fair. Few people attending Wolf of Wall Street are likely to encounter any such humiliation. The producers are talented and the publicity makes it clear what to expect. It will surely be a blast for those who like such things. But the announcement does confirm that the inclination to turn audience members into sharers is not going anywhere. Some of us prefer to remain in our own space. Some of us regard even that “sign of peace” business at the end of religious ceremonies as a gross intrusion. Some of us are quite happy being bad sports.