Kinky Boots: ‘Two and a half feet of tubular, irresistible sex’ 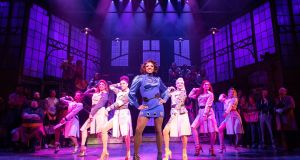 The combination of Lauper’s songs, transvestites and a shoe factory in Northampton leads to a whole lot of fun

The Kinky Boots production must have a massive footwear budget. Thigh-high, sexy, shiny, patterned, show-off, six-inch-high boots; but boots sturdy enough to support plenty of strutting and muscular dancing by men on stage, night after night. Which is kind of the point of the show.

The UK touring production of the Broadway hit is about to land in Ireland, for its Irish premiere at the Bord Gáis Energy Theatre, bringing its massive stash of sexy boots with it, for a feel-good, small-town story about transvestites, drag queens and triumph over adversity.

The world may seem totally cool with gender fluidity these days (or it pretends to be), but the Kinky Boots story is based on real events in the 1990s. And though attitudes to gender identity and cross-dressing have evolved since, it can still be challenging for some.

It may seem an unlikely subject for a funny and uplifting stage musical, but it’s an engrossing human story, with terrific songs by Cyndi Lauper, good heart and humour.

It all started with a 1999 BBC documentary Trouble at the Top, about Steve Pateman, struggling to save his family-run shoe factory, WJ Brooks Ltd in Earls Barton, Northamptonshire, by making fetish footwear for men.

The documentary inspired the 2005 British film Kinky Boots, by Geoff Deane and Tim Firth, in which Pateman becomes the character Charlie Price. The film in turn inspired the Broadway stage musical, premiering in Chicago in 2012, with new music and lyrics by Lauper, a book by Harvey Fierstein and direction/choreography by Tony award-winner Jerry Mitchell.

In the fictional versions, having unwillingly inherited a shoe factory from his father, Charlie forms an unlikely partnership with cabaret performer and drag queen Lola to design and make a range of sexy high-heeled boots, reinforced with steel to support a man’s weight, or as they put it onstage, “two and a half feet of tubular, irresistible sex”.

And although “we don’t get many transvestites in Northampton”(imagine the line in an English midlands accent), the new range saves the day and in the process – you’ve guessed it – Charlie and Lola discover they’re not so different after all. (As you also might guess, this Charlie and Lola have nothing to do with the children’s books series.)

The combination of Lauper, transvestites and, of all things, the business challenge of a shoe factory in Northampton, leads to a whole lot of fun, and such musical whimsy as the number The Most Beautiful Thing in the World... is Shoes.

The soundtrack mixes musical styles, from disco to ballad to gospel vibes to comic songs and, as well as the top-notch creative credits in Lauper, Fierstein, Mitchell, the musical has won buckets of awards: three Oliviers (including Best New Musical) three WhatsOnStage Awards and six Broadway Tonys.

But back to those boots. While many of the cast dance in heels, and the booted-up drag Angels are fabulous, Kayi Ushe, who plays the dynamic and engaging Lola, at the centre of the story, spends hours dancing his way through the show in impossibly high heels.

It’s a “hugely physical role, a challenge for every part of my physicality,” he says. Aside from anything else, “just wearing the boots, being on demipoint for most of the show in six-inch heels, is really no laughing matter”. The line about dancing comes to mind: Ginger Rogers did everything Fred Astaire did, but backwards and in high heels.

There are no tricks for learning to not just walk in six-inch heels, but dance in them too. When Ushe was cast to take over the role, he resolved to spend his first day learning the choreography wearing “the hardest, steepest heels, which at the end of a five-hour day is a huge mistake. I wanted to know how it can feel at its worst, and work back from there, in other heels.”

So later, when he put the highest heels back on for a show, “they felt like trainers”, because he had already danced five hours in them in rehearsals. To move in the heels, “you just have to release your body to that. There’s no learning you can really do. When you put on your first heels for the first time, if you try to resist them you’ll give yourself an injury. But if you just go with them and allow them to move your body...”

Those highest heels (he wears them singing Sex is in the Heel), “literally push me forward, and there’s no way you can possibly be on the back foot. It just pushes everything forward, which is great for me as an actor.”

Some of the cast are chatting where they’re performing at the Theatre Royal in Plymouth. Ushe and Joel Harper-Jackson, who plays Charlie, the Northamptonshire lad who finds himself making fetish footwear in his ailing shoe factory, have both performed in Dublin in touring musicals, and agree Irish audiences are responsive and “can be relied on to have a good night with us”.

Paula Lane, who plays key character, shoe factory worker Lauren, hasn’t performed in Ireland before, but “I did do the Spar 5km run in Dublin! And I was secretly pregnant at the time”. She is familiar from playing Kylie Platt in Coronation Street for years, so she’s adept at a different kind of performance pressure, “with an audience of 10 million looking down the barrel at you” on Corrie.

It’s a 15-month tour booking, a long time on the road, and Harper-Jackson talks about how important it’s been performing beyond London, in places that may be less accepting of gender fluidity. In what seems an embodiment of the show’s message of acceptance and common humanity, he points out the irony that Ushe, playing Lola, is straight, while he, playing straight-up Charlie, is gay.

And as Lola says in Kinky Boots, “You’re never more than 10 steps away from some kind of cross dresser”. I challenge anyone to come out of the show not wanting their own pair of shiny red sexy boots.

The Irish Premiere of Kinky Boots is at the Bord Gáis Energy Theatre, Dublin, August 19th to 31st