The Big Chapel X review: A story of schism brings a community together 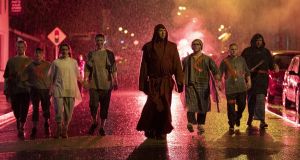 St Brigid’s College, Callan
★★★☆☆
As a large crowd snakes through the dusky streets of Callan, the storied Co Kilkenny town, you may notice the darkened windows of several homes beside our lanterns and hubbub and wonder where everybody is.

Given the sheer scale of Asylum Productions and Kilkenny Art Festival’s long-gestating adaptation of Thomas Kilroy’s The Big Chapel, which swells to include almost 100 performers, and half as many again among its crew, it is probably safe to assume they are right beside you.

An impressive feat of community theatre, led by professional artists and supported by the Abbey Theatre, the undertaking is an impressive act of mobilisation. That brings a pleasant irony: Callan’s history of religious schism in the 1870s, immortalised a century later by Kilroy’s bold, fracturing novel, is now bringing people together.

Setting their version in a theocratic dystopia – a kind of Handmaid’s Tale Gilead where female education ends prematurely but iPhones, hoverboards and Matrix references still abound – the Big Chapel X seems both a sincere critique and a fluent demonstration of the same thing: crowd control.

Convened in the hall of the local girls’ school, the audience are addressed as “children”, prepared for a religious procession by Aideen Wylde’s comically worrisome schoolmarm. But the town of Kyle is not so obedient, as John McCarthy’s HP Butler makes clear, given the body armour and pomposity of an embedded news reporter.

Against the repressive orthodoxy of the blue-bearded High Shepherd (Ciaran Bermingham) comes the radical reformism of the Red Priest, Fr Lannigan. The division splits one family in particular, sundering the philosophic School Master Scully from his son, Marcus, and adopted daughter, Nina, whose own secret affair is reason enough to welcome revolution.

Writer John Morton and director Donal Gallagher recognise both the echoes of history and a timely allegory for the entrenched divisions of today, where the Red Priest’s sly denunciation of the others as “Schismatics” could describe any participants in the bitterly polarised and performative debates of politics today.

Given jury-rigged ingenuity by designer Medb Lambert, the trail of resistance on Bridge Street – “You are now entering Free Kyle” reads a familiar slogan – to the flare of war at a crossroads, and later scenes of slaughter and sacrifice, actually owe something to ancient religious rituals themselves. Like the attendance for the pageantry of a mystery play, we are all followers.

Hearteningly, the project embodies a greater faith in the wisdom of groups and the spirit of collaboration, where the flow of action and marshalling of attentions come off as harmoniously (and occasionally as impishly) as the efforts of Irene Buckley’s massed choir, as likely to pursue a reverent hymn as an irreverent lift from a pop song.

Like the production’s see-sawing styles, from the awesome glow of lighting designer Paul Keogan’s hollowed-out house backdrop to the tremble of hand-held torches, the production’s move from comedy to tragedy may come in uneasy lurches, while the complexities of Kilroy’s story are often simplified to amplify the message. But such an inclusive, co-operative, large-scale communion is a feat in itself, and an instructive lesson. “It gave meaning to the place in the beginning,” Kilroy wrote of his imagined troubles, and here it does so again. The Big Chapel X is very broad church.