When theatre designer Owen Boss began bringing his children to work, it became a test run for a new project at The Ark 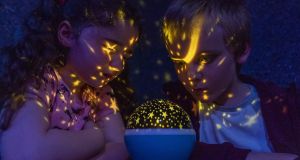 It’s rare to see two artistic collaborators, fresh from a finished project, so conspicuously at odds with one another during an interview.

It’s rarer still to see two co-designers discreetly shoving each other with their elbows while a third designer is not looking. Rarest of all, though, is to see them somehow overcome their differences, about a minute or two later, and start helpfully attending each other in the tricky business of tying friendship bracelets around each other’s wrists.

But things tend to move swiftly (and often stealthily) between the father-daughter design team behind Scrapefoot, an immersive visual art installation which has been fastidiously and imaginatively conceived by ANU Productions, and their children, for The Ark. “Actually, I don’t know if they know that they made it,” says their father, Owen Boss, ANU’s co-artistic director and designer.

He turns to Lily Rose, a quiet and attentive girl with a penchant for writing and illustrating stories (“Obviously!” says her sister).

Having just turned 12, Lily Rose seems to play peacekeeper to her six-year-old sister Belle beside her, whose gaze remains shrewdly fixed on her interviewer while her elbow covertly claims more territory from her sister along the theatre’s long bench. Hostilities instantly cease. “Did you know you made it?” Boss asks. They did, they nod emphatically. “You see, it was all so much fun,” Boss explains dryly.

Creative difference aside, it’s certainly turned out fun. Inspired by the tale of Goldilocks, whose story has been restored to the hero of an earlier version, a curious fox named Scrapefoot, by the writer Jody O’Neill, ANU’s first show for children is an immersive adventure of giddy trespass, liberal testing, and on-the-move problem solving. Escaping a gathering storm outside, participants enter, four kids at a time, into the sturdy home of three bears, where everything from their mail to their umbrellas, their breakfast bowls to their chairs, and their preferred beds to their furry underpants, come in corresponding sizes.

Progressing through various rooms in the fox’s tumultuous wake, we encounter televisions that crackle to life with urgent weather presenters (“Don’t make unnecessary journeys!” beseeches roving correspondent Gretel over a chyron of topical jokes) and messages from Scrapefoot that fizz over radios. Secrets and puzzles spill from every other nook. There are as many ursine puns along the way as you can bear. And this maze of hidden doors, wandering tunnels and leaping animations leads eventually – for a necessarily expedited exit – towards a whooshing slide back out into the real world.

Boss had been encouraged by the possibilities of an immersive playground by bringing his daughters to work. He remembers Lily Rose and Belle exploring one of the artfully dressed sites for Sunder, ANU’s 2016 production about the legacy of the Rising, on Moore Street, a genuine rebel hideout where the girls clambered through holes in the brick and scuttled through halls. While he prepared These Rooms, in the same year, they darted between double mirrors and gouged out masonry.

“There was a level of engagement there with the actual fabric of the immersive experience that started to set off lightbulbs in our heads,” says Boss.

Grown-up audiences for ANU’s boldly site-specific work, saturated with history and permeated with ghosts, will know something of that thrill, let loose in haunting spaces to explore. Having long hoped to make a show for young audiences, ANU discovered with Scrapefoot that, if anything, children wanted even more liberty for their searches.

“That’s what we were trying to do,” says Boss, recalling an early development at the Gate Theatre, where the company is currently undertaking a residency. “We try to build a world where, as much as you can, you just let them be free. There is nothing to stop you. And we try to anticipate those things that may intrigue them.” Over a week’s workshop with a group of five children, they realised two things in particular: “It came back they wanted to be scared. But not too much,” says Boss. “And they wanted to go in without their parents or guardian.” Boss shrugs. “So that’s what we did.”

There’s something appropriate about the Scrapefoot source material then, with its frisson of danger and lack of adult supervision. That may be a staple of fairytales, where children discover self-sufficiency by wandering unprotected through enchanted or ominous environments, but here it comes with the reassurances of a search for something optimal. That porridge may be too hot or too cold, that bed too hard or too soft, but with enough room to try and test, you eventually find something that’s just right.

In concocting the world of Scrapefoot, ANU left most of the dreaming to their children. Deciding there were 20 or 25 story points along the journey, Boss invited his daughters to turn over a mystery card representing each element then asked: “What does that look like to you?” Together they imagined a secret tunnel leading to the bears’ bedroom, or a sitting room piled high with lovingly crafted “Beary Tail” books, written by Kennedy and O’Neill’s seven-year-old son Tom, eventually constructed in The Ark’s commodious gallery space under glittering, shifting lights road tested by Bagnall’s four-year-old daughter, Emily.

The way to deliver such an experience without obvious intervention is something Boss, sound designer Carl Kennedy and lighting designer Ciaran Bagnall have themselves been testing through much of ANU’s work, towards their own Goldilocks conditions: automation. The voices and images of characters that we encounter through Scrapefoot, such as Niamh McCann’s personable weather reporter Gretel, and Louis Lovett’s impish fox Scrapefoot, are all recordings, figures that materialise in time with our movements, surprises just awaiting discovery. (One of The Ark’s ushers also attends, to assure guests or encourage them benignly.)

In a trial run of the show a few months ago, at the Complex in Dublin, its adult designers were quietly pleased with their work, impressed by innovations, slyly concealed speakers and subtly added curlicues. When the children reconvened, after more than a year since their workshop, to test it out, the adults watched them expectantly.

The kids were not impressed.

Too warm? Too cold?

He turns to Lily Rose a little hopefully. “Do you remember the microwave?” he asks, remembering the theatrical sorcery behind making the appliance whirr to life with a spell of light, sound and engineering. “All right,” Lily Rose responds, “it was a microwave?” Her father deflates again.

“All of the screen stuff worked,” he continues. “Or anything that was almost moving, like the flashing radios.” His hand slices the air. “Then they were straight in.”

How reassuring it is to discover that children are reliably entranced by screens is a matter for parents and guardians to decide, but the greater lesson for Scrapefoot’s creators, as they revised their plans, was to create a trail for its audience to follow rather than to lead with a subtly guiding hand: the invisible speakers disappeared and instead moved into active objects: interactive breadcrumbs through the journey.

Was Lily Rose constructive with her feedback? She laughs.

“Ummm,” she ponders. “I told him it was fine the second time.”

Would Belle have done anything different?

“Yes!” Belle says immediately. Her interviewer and her father respond with one voice: What would she do differently? In the length of Belle’s pause entire civilisations seem to rise and crumble. Finally she admits that she would make it longer. Currently the experience lasts a sprightly 25 minutes, which may explain why Belle has attended it five or six times so far.

For Boss, a year of regularly attending Ark shows with his children has proven to him just how hungry kids are for new experiences. A particular highpoint was Mile(s)tones, a jazz performance of Miles Davis for children of six and up. “And if you can interpret that for six-year-olds,” he marvels, “anything is possible.” His co-creators Lily Rose and Belle, now enjoying a happy truce, agree. After all, with enough trial and error, they managed to get Scrapefoot just right.

Scrapefoot continues at The Ark until August 31st