‘I think it has a lot of redemption and, me personally, I’m a sucker for redemption’ 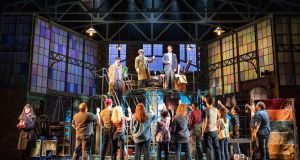 At its core, Kinky Boots is a musical about tolerance and acceptance.

When Cyndi Lauper was a child, she used to wile away the hours listening to cast recordings of Broadway musicals like My Fair Lady and South Pacific.

“I learned how to do sing listening to my mother’s musicals,” she explains in her signature New York drawl. “I was very odd. My mother said I used to stay by myself a lot but I wasn’t. I was with Julie Andrews, I was with Rex Harrison, I was with all the people who were in the shows. I really thought for a long time I was Stanley Holloway, but you know” she laughs, referring to the actor who played Alfred P Doolittle in My Fair Lady.

All those afternoons spent playing make-believe paid off decades later when Lauper was enlisted to write the score for Kinky Boots, a musical based on the film of the same name.

The show tells the true story of a shoe factory owner in Northampton who, in a last-ditch effort to save his business, partners with a drag queen and his troupe to manufacture high-heeled boots “that can bear the weight of a full-grown man”.

The story was first featured on a BBC documentary series 20 years ago where it caught the eye of film-makers before eventually being adapted for the big screen.

Eventually it travelled to the stage. The high-energy production made its Broadway debut in April 2013 and served as a breakout vehicle for the actor Billy Porter, now known for starring in the television series Pose and wearing a tuxedo gown to this year’s Oscars.

It subsequently won six Tony Awards, including Best Musical. Lauper made history by becoming the first woman to win the Tony Award for Best Original Score by herself. Accepting her award, she thanked her mother for exposing her to musical theatre. “I wrecked all her Broadway musicals when I was a kid,” she said.

The show has since toured internationally and bowed in the likes of the UK, South Korea, Japan, Australia, Poland, and Germany. It makes its Irish debut later this month when it comes to the Bord Gáis Energy Theatre for a 10-night run.

That it appears to resonate with so many cultures is precisely what drew Lauper to the project in the first place.

“This story is such a good story because it’s about two men who couldn’t be more opposite but yet they have the same issue with the not living up to your father’s expectations,” she says. “That shows the commonality of human beings. It doesn’t matter how different you are, you may be dealing with the same problem. That is what humanity is all about.”

During a career, spanning 40 years, Cyndi Lauper has repeatedly shown herself to have a knack for creating feel-good, heartfelt music. After all, this is a woman who has shifted more than 50 million albums and been responsible for enduring classics like Girls Just Want To Have Fun, Time After Time, and True Colours.

When it came to writing Kinky Boots, she quickly realised that there was more to writing a musical than crafting earworms.

“I was trained with hooks, songs you can walk out singing,” she explains. “As I got into writing this, I realised, ‘wow, somehow you have to move the story along!’ ”

The gravelly-voiced theatre veteran Harvey Fierstein, known to non-Broadway aficionados as Robin Williams’s brother in Mrs Doubtfire, wrote the book and acted as a sounding board for Lauper.

“I kept asking, ‘What are the rules? Am I allowed to do this? Do you do that?’ and Harvey kept saying, ‘there are no rules.’ ”

It represented new terrain for Lauper as a songwriter, but she embraced the challenge and relished writing for different performers. “Because there are so many different types of people in the show I had the opportunity to do everything I was told I couldn’t do as Cyndi Lauper,” she notes.

The result is an infectiously catchy score comprising emotive ballads and up-tempo club bangers in equal measure. In other words, it’s quintessentially Cyndi.

She incorporated a range of influences and genres into the score. For instance, Lauper listens to tango music and considers herself a fan of Astor Piazzolla, the Argentine tango composer. In particular, she is fascinated by the relationship between the concertina and the violin in tango music. (Side note: you have not lived until you have heard Cyndi Lauper say Argentina. Awgentina.)

In 2010, she visited Buenos Aires as part of her Memphis Blues Tour and visited a local record shop. “No matter what country I visit, I try to go to a record shop and get some music from the place,” she says.

There, she picked up an electronic tango record and was immediately hooked. “I kept thinking, ‘okay, how can we use this?’ ” she recalls. She later incorporated the electronic tango sound into a Kinky Boots number titled What A Woman Wants. Inspiration can strike in the most unlikely of places, it seems.

At its core, Kinky Boots is a musical about tolerance and acceptance.

Indeed, the musical concludes with a rousing showstopper titled Raise You Up/Just Be, which includes the lyrics, “Just be/Who you wanna be/Never let ‘em tell you who you ought to be/Just be/With dignity/Celebrate yourself triumphantly.”

In that sense, it perfectly aligns with the singer’s well-documented LGBTQ+ activism. She is the co-founder of True Colours United, a non-profit organisation working with homeless LGBTQ+ youth and is widely regarded as a gay icon. Recently, she performed True Colours at the WorldPride opening ceremony commemorating the 50th anniversary of the Stonewall Riots.

In many ways, she has helped define what it means to be a straight ally. Long before Taylor Swift was enlisting the Queer Eye cast to star in her video, Lauper was fighting to centre the LGBTQ+ community in her work.

In a recent Instagram post, Lauper wrote about performing at the Gay Games with 50 drag queens in 1994. During the performance, she looked up and noticed that the drag queens were not being shown on the big screen. “I was like, ‘are you kidding me? You mean the gay community is going to discriminate against drag performers? What the heck? Why wouldn’t you put those amazing shoes on the JumboTron?’ ” she wrote.

Afterwards, she opted to make amends by featuring the drag queens in the music video for Hey Now (Girls Just Want To Have Fun), a reggae-tinged remix of the original song. “I thought, ‘you won’t show them? I’ll show them. I’ll not only show them but I’ll make them all famous’,” she wrote.

Lauper has spent her career fighting to change hearts and minds. That battle is central to Kinky Boots, she says.

“I think it has a lot of redemption and, me personally, I’m a sucker for redemption,” says Lauper of the musical. “What is great about it is that everybody evolves in it. In a lot of ways, that is like real life because people do change and they change each other’s minds.”

Despite being integral to the success of she says, she is reluctant to take too much credit and insists on heaping credit upon her collaborators and the wider creative team. “It was really a great team,” she says, namechecking everyone from the show’s director to “the guy who did the lighting”.

“We all worked together,” she says. “That’s what made it great. The sum of the parts is greater than the individual. In this case, all of us together is what made it happen like that.”

Next on the horizon? A musical adaptation of the romantic comedy Working Girl. If it’s half the success of Kinky Boots, she might need to make space on the shelf for another trophy.