Karl Shiels: Maybe because he had been an electrician he was aware of the capacity to shock

A passionate advocate for originality, he knew that theatre could be electrifying 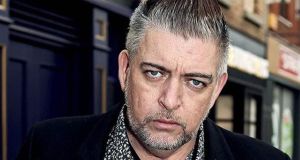 Karl Shiels had a way of making things happen.

Even in the theatre, where making things happen, however steep the odds, is the soul of the endeavour, Shiels’s appetite for the art stood apart. In an industry that is not short of dreams, he was a rare figure who could turn them into schemes: knowing that with enough goodwill, hard work, and charming persuasion, there is no project too unlikely to get off the ground.

Actually, the more unlikely a project sounded the more Shiels seemed to like it.

How about having a sizeable delegation of the theatre industry write, rehearse and perform a series of new plays for a sold-out audience within 24 hours? Why not?

How about creating a show in a dank public toilet on Stephen’s Green and see if it can become an international festival hit? Worth a go.

Maybe it was his background as an electrician, before he put his energies into the Gaiety School of Acting, that made him aware of the capacity to jolt and shock

Maybe kick-start a new writing venue, during what otherwise seemed like a drought for new plays, in a room above a pub, and make it an incubator for new talent for the better part of a decade? Nobody else would even dare.

When I was working in a box office in Edinburgh, in 1999, Shiels would stop by each evening to enquire about the night’s audience. The play he was performing was Howie The Rookie, Mark O’Rowe’s breakout success from 1999, fresh from its Bush production in London. He was quietly pleased, each time, to hear it was playing to a full house.

Lean, dark and handsome, Shiels played Rookie Lee, an itchy Dublin gangland lothario, opposite Aidan Kelly’s brute fighter Howie Lee: two enemies, drawn together to share a thrilling tale, thick with imagery and terse poetry, which gave Dublin an epic feel, lyrical with action, resonant with mythology. At a time when Irish theatre was groaning with kitchen-sink realism, it suggested there might be more to life than, well, life.

I don’t know how important the experience was to Shiels’s idea of what theatre could be, but when he returned to the role, in 2006, for Jimmy Fay’s revival at the Abbey, the association seemed indelible. His experiences as an actor with the playful, rough-hewn work of Bedrock, the gusto with which he attacked the Abbey’s scandalising Barbaric Comedies, and the wild endeavours of his own company Semper Fi gave him a keen appreciation of the sensational. Or maybe it was his background as an electrician, before he put his energies into the Gaiety School of Acting, that made him aware of the capacity to jolt and shock? A passionate advocate for originality and a merciless critic of mediocrity, he knew that theatre could be – and ought to be – electrifying.

So he imported the 24 hour-play concept to a nervy community ready for a challenge; he placed a noirish diptych in a public toilet with Paul Walker’s Ladies and Gents, and later staged a heist-gone-wrong in an abandoned warehouse; he once played a role in the Gate Theatre, and a role in the Abbey Theatre, on the same damn night dashing down O’Connell Street to make his entrance; he kept encouraging new writers – including Gillian Greer, Lee Coffey, Stephen Jones – to delve deep into monologues or dialogues of daring and desire, then, as director, either styled them into fantastic shapes, or guided them into exquisitely small encounters.

Last night, on the day the news of his sudden death landed, like a hard punch to the chest, theatres in the country joined together to applaud Karl Shiels

Karl was such a big personality – a gregarious host with an unfailingly sharp dress sense, a sincere soul capable of deep tenderness, a capable operator with a heavily impish streak – that it could feel surprising to see him disappear into a role. He could bring the house down with a well-aimed cheesy grin (as he did in the Abbey’s Comedy of Errors), or still your breath with a beat of introspection (as he did as Macduff in the Abbey’s Macbeth). He could transform himself, for Druid’s Penelope, into a buff, self-preening poser in speedos, as tanned and lacquered as a life-size Ken doll. For all his directorial taste for spectacle, sound, the stage effects that make mortals look like gods, his own performances made the smallest human moments matter.

Maybe you saw his commanding performance, eaten up by addiction and self-loathing, as Joe in Sebastian Barry’s Pride of Parnell Street. I wish you’d seen him in one of my favourite performances, as the uneasy, taciturn son Damian, a stranger in his family home, unable to express grief in Deirdre Kinahan’s Hue & Cry. You can still watch him on Fair City, where his character Robbie Quinn remains, a hunched, guarded and troubled figure, in Shiels’s achingly raw performance. It’s a tribute to his prolific output that you can also still see his stage work, where Bullfight on Third Avenue, the last original play he directed, is currently on in Bewley’s Café Theatre.

Last night, on the day the news of his sudden death landed, like a hard punch to the chest, theatres in the country joined together to applaud Karl Shiels, in appreciation for his life, for his work, for everything he made happen.