Much Ado about Nothing review: Booze, subversion and anxiety 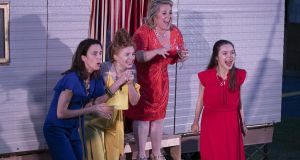 MUCH ADO ABOUT NOTHING

The Quad at St Kiernan’s College, Kilkenny
★★★★☆
A lot goes on in Much Ado about Nothing.

In the mingled memories of Shakespeare’s comedies it’s the proto-screwball affair, where Beatrice and Benedick, as defiantly solitary as they are mutually obsessed, bicker their way into love.

That is to forget its other plot, however, which the time makes more vivid, in which male villains conspire to frame and shame a virtuous young woman, while others rush to publicly humiliate her, and her family float the idea of an honour killing. And you thought The Taming of the Shrew was a hard laugh. Try this shaming of the true.

A problematic comedy, then, whose alfresco staging this rainy summer has proven more so. How seriously should Rough Magic and Kilkenny Arts Festival’s staging take it?

Alive to the sheer weirdness of Shakespeare’s play, a staggeringly cruel and casually violent comedy, Ronan Phelan, as director, tries to both explain and match it

No longer set in the Italian villa of the nobleman Leonato, Nathan O’Donnell and Ronan Phelan’s adaptation moves to the sweltering mobile home of Leonata (Clare Barrett), a warm-hearted, endlessly tippling hostess, where everything has the feel of a trailer-park holiday that has got wildly out of hand.

This setting is hardly strict, though, and not entirely worked through. Aware of the play’s capacity to offend, the production seems shy to give more, softening any class implications with a neutral Irish voice. “Ah, c’mere,” Barrett’s tactile, flirty Leonata adds, hugging her military visitor Don Pedro (Conor O’Riordan), as his war-weary soldiers cut loose with the order to “Fall out!”

Given the “merry war” between Maeve Fitzgerald’s sharp-tongued Beatrice and Peter Corboy’s strutting and vain Benedick, falling out might be an instruction for everybody.

Alive to the sheer weirdness of Shakespeare’s play, a staggeringly cruel and casually violent comedy, Phelan, as director, tries to both explain it and match it. The action, for instance, is sloshing with booze, shimmering with gender subversion and bristling with anxiety. Romantic schemes get concocted through ferocious hangovers, conducted with cartoonish conceits. At one point, overcome during a wild hoedown, Benedick’s hysterical misogyny tips into a lurid castration fantasy. Though this be madness, yet there is psychology behind it.

Similarly, they lean hard into the shocking humiliation of Venetia Bowe’s delicate Hero, harangued and spat on by even her mother. To then reach the play’s “happy ending” – along a path lined with fake deaths and doppelgangers – requires a kind of mass delusion, made woozier with the late introduction of karaoke country songs and glitzier, gaudier spectacle.

That fits with a play where love, honour, villainy and even grief become a kind of public performance, which the ensemble lustily and cleverly embrace, fuzzing over any misgivings by getting everybody drunk on comedy.

It makes the final sight both giddy and loaded, a sight gag that becomes a troubling memento for the morning after, where Margaret McAuliffe’s brassy, loyal and roundly mistreated servant is forgotten by everyone – including (as one costume implies) her playwright. There is much ado in the impossible merriment that sends the play happily into the night. But what is she? Nothing?

Malachy McCourt: ‘Frank wouldn’t be happy unless he was miserable’
7