Kevin McAleer: My Famine comedy will have you laughing all the way to workhouse

Spud! is a surreal new comedy that we're hoping won't upset the faminists 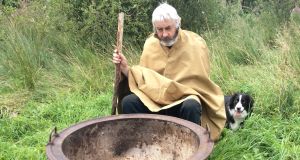 It started with an email from my friend Conor Grimes 18 months ago, with the title How to Survive the Great Irish Famine. He’d had the bright idea that the two of us should write and perform a two-act comedy on the subject, set in a rural cottage in 1847. “If we don’t do it, somebody else will,” he said. So we did it. The finished product, now with the slightly snappier title of Spud!, opens in the Lyric in Belfast in September.

We’re about to find out if Ireland is ready for a comedy about the Famine, or whether it would have been wiser to maybe leave it for another 170 years, until the dust settles. It’s only four years since Channel 4 had a similar idea for a sitcom called Hungry, to be scripted by Irish writer Hugh Travers; the very idea caused an outcry that awoke the faminists, and the project was left on the shelf. “Murder, genocide, people dying, retching with their faces green from eating weeds, their bowels hanging out of them – no passage of time will make that funny,” said Tim Pat Coogan. It’s hard to argue with that.

And yet we have a finished play on our hands, and we’d like the world to see it. We did all that soul-searching ourselves at every stage – before, during and indeed after the writing. We read a lot: William Cobbett, Asenath Nicholson, Breandán MacSuibhne, Primo Levi, De Latognaye, William Bennett, Eavan Boland, to name a random few. The Famine has come more to the surface in Irish discourse over the past few years. Early in 2018 I went to Dublin to see Black ’47; the thing I remember most was that at one point in the film, the audience laughed. The exhibition Coming Home: Art and the Great Hunger visited Dublin, Skibbereen and Derry. A famine opera called The Hunger opens in the Abbey a week before our own show – we’re praying it won’t be funny.

I think all our research has given Conor and I a sense of being direct descendants of famine survivors – it’s our own story to tell, our own history to play with. It’s not done flippantly, and certainly not to shock. We identify with all the deep psychic scars of the nation from Famine times: the suffering, the hurt, the anger, the shame. And if that sounds a bit serious, rest assured that we put it all in a large pot, add several dollops of nonsense and a large pinch of salt, to produce a surreal soup that we hope will have you laughing all the way to workhouse.

Speaking of soup, I was amazed to learn a few weeks ago that, unknown to myself, I’ve had an object sitting in my own backyard since the day I was born that connects me all the way back to the Famine. It’s a cast-iron cauldron about a yard in diameter, which my dad used for feeding the pigs. I had always assumed that was its primary function, until a friend informed me that I actually own a genuine Famine pot, or coire. I googled her information to check, as you do, and there it was: a picture of the famine pot, exactly the same as my own. They were used in soup kitchens and workhouses to feed the hungry, around 1846-1947. As I walk on stage to do the show, that cauldron will now be my spirit guide.

To put the icing on the highly serendipitous Famine cake: my wife took some pictures of me (in dubious period costume) to go with this article. I picked out a photo, and only afterwards noticed the file name: IMG_1846.JPG

Spud! is at the Lyric Theatre, Belfast, August 31st-September 14th

Last couple in paradise: The honeymooners stranded in the Maldives