Irish theatre in 2019: A dramatic year that left the future uncertain

Theatre in Ireland this year was bookended by two crises, a state of play mirrored by the work 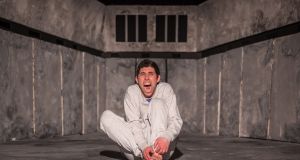 Rex Ryan in The Ridleys, at the Peacock Theatre. Photograph: Ste Murray

It was a dramatic year for theatre, bookended by two moments of crisis. The first played out in the full glare of public attention. The other, which is happening now, has been observed more quietly, if at all.

Barely one week into 2019, Irish theatre was once again a news story. On January 7th, an open letter lambasting the Abbey’s production model, for Abbey directors Neil Murray and Graham McLaren’s perceived overreliance on staging co-productions and insufficient employment opportunities at the National Theatre, among other grievances, was signed by 312 theatre professionals.

So began a turbulent year for the Abbey, which dealt with the fallout in media statements, a tense committee hearing in the Oireachtas, and a series of meetings with industry representatives, finally yielding commitments and outcomes. By the time it announced its programme for 2020 this month, with a balance between self-produced and co-produced work that did not appear radically different, the outcry had faded away, either because communication between involved parties had become clearer, or because such an explosion of protest could only immolate the building or fizzle out.

Overshadowed by the furore at the time was the kind of co-production in question, when Karl Shiels brought his dark double-bill The Ridleys to the Peacock. This might have been a breakout moment for Shiels’s Theatre Upstairs, the actor/director’s tenacious home for short-form new writing, and a launch pad for new careers.

Sadly, it turned out to be the theatre’s swansong: a couple of months later, Theatre Upstairs announced its closure after nine years in business. In any circumstances, the end of a venue committed exclusively to new work would feel unnatural, like the loss of promise. But that sensation became unbearably tragic in July when Shiels, a tireless advocate for new artists and energising audiences, died at the age of 47.

If any theatre made concern for generational succession explicit, it may have been the Gate, which hit a stride this year having sought to rebuild trust among the community for past sins. In The Children, by Lucy Kirkwood, director Oonagh Murphy delivered a knockout production in which Marie Mullen, Seán McGinley and Ger Ryan played three scientists living through a nuclear disaster for which they are responsible: “We left them with a s**tshow waiting to happen,” Ryan’s character put it, in a play irradiated with timely questions about the future we are building.

Just as encouraging was Beginning, director Marc Atkinson’s debut at the same theatre, in which Eileen Walsh and Marty Rea gave heartbreaking performances as two bruised souls at the end of a house party, trying to make a connection in a disconnected, dizzying world.

A superb play by Dylan Coburn Gray, Citysong at the Abbey, seemed to celebrate that fracture, or at least attempted to map it, skipping sympathetically across three generations of one Dublin family to create a vivid portrait of the city at this moment.

Gray followed it, soon after, with Ask Too Much of Me, a multi-character piece for the National Youth Theatre, performed at the Peacock. This play was as persuasive a document of a time, deftly exploring the anxieties and resilience of a new generation contending with issues of property, of faith, of the future. (How nice, also, to see Peat, Kate Heffernan’s play for young audiences, in the Ark, allowing younger generations still to reckon with the past playfully and potently.)

At the grand old age of 35, Rough Magic found new energy with Much Ado About Nothing. The play’s disturbing comedy was matched by director Ronan Phelan’s own enlivening stagecraft and sly commentary at the Kilkenny Arts Festival.

In Marina Carr’s Hecuba, the company’s contribution to the Dublin Theatre Festival, Lynne Parker’s unsettling treatment gave these ancient characters captivatingly new expression, teasing out the horrors of war and desire. Here was another play, more to the point, that dealt with infanticide, the annihilation of the future. Next to The Bluffer’s Guide to Suburbia, Raymond Scannell’s exemplary piece of gig theatre for Cork Midsummer Festival that offered a wry account of a Gen Xer and failing musician who can’t get ahead, a troubling stasis was clearly on everyone’s mind.

That added some sting to THEATREclub’s troubled production at the Abbey, It Was Easy (In the End), a three-hour plus combination of Hamlet and capitalist critique. It hardly wanted for ambition, but struggled for coherence as it reminded us, in Slavoj Zizek’s words, that it was easier to imagine the end of the world than the end of capitalism. With the departure of the company’s founder, Grace Dyas, soon after, it is now also easy to imagine the end of THEATREclub, the epitome of Irish theatre’s insurgent youthful force.

There was cause for cheer from Anu, Brokentalkers and Dead Centre, all of whom continue to put contemporary Irish theatre on an international stage with restless creativity, moral urgency and admirably wide touring routes. Dublin Fringe Festival had an excellent, engaging year, despite a worrying contraction in available cultural spaces in the capital.

While Landmark created its own mobile space in Theatre for One, at the Cork Midsummer Festival, for rivetingly intimate encounters with some of the biggest names in the business, Fishamble’s conversely huge project A Play for Ireland culminated in Michael Patrick and Oisín Kearney’s counterfactual satire The Alternative, a vision of another Ireland that is destined to tour the country.

The year’s late, quiet crisis might be seen as crystallising the anxious undercurrent of 2019. This crisis concerns the dwindling of opportunities for new artists, squeezed out of the game by disappearing venues, rising rents, and faltering subsidy. To hear that the lively Collapsing Horse, established in 2012, are calling it a day, amicably and on their own terms, was almost head-spinning. Director Dan Colley’s most recent work, A Very Old Man with Enormous Wings, was both a hit on the Fringe and currently bringing the Abbey’s year to a close after a swift transfer to the Peacock.

The outcry that began the year, led by senior figures in the industry and amplified by the media, railed understandably against the upending of established relationships. Now we have the troubling spectre of young companies who cannot establish, folding quietly, as an artform’s future vanishes. And it’s happening without a sound.