Actor from Ennis almost gave up after 10 years struggling to make it in London, before landing her big break 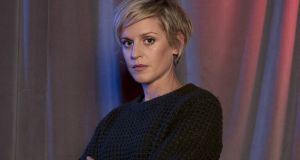 Irish actor Denise Gough was nominated today for a 2018 Tony Award for her performance as Harper Pitt in Marianne Elliot’s National Theatre revival of Tony Kushner’s play Angels in America on Broadway. She first played the role at Lyttleton Theatre, National Theatre, London, and has already won the 2018 Olivier Award for Best Actress in a Supporting Role for the part.

Gough, who is from Ennis in Co Clare, graduated from the Academy of Live and Recorded Arts in London in 2003. She struggled to make it as an actress in London for over 10 years, while babysitting and waitressing, and was about to give up on acting when she got a big break, in a new play People, Places & Things at Britain’s National Theatre. She played an actress who is an addict in recovery, and her performance won rave reviews and awards, including the Olivier and the Critics Circle Award.

She also played the role in New York, before performing in the marathon eight-hour play Angels in America; she said about the transfer of the London production to New York: “I am just really glad we’re taking the play home. If we hadn’t taken it to New York it would have been almost shameful.”

The New York Times review said “Her Harper now shimmers with wit and the promise of a buried resourcefulness. Harper’s spikiness is on a level with that of Mr. [Andrew] Garfield’s Prior, and when they meet “on the threshold of revelation” in shared hallucinations, they are a wonderfully matched set.”

The play had 11 Tony nominations, with SpongeBob SquarePants and Mean Girls leading the pack with 12 nominations each.

In film Gough has played Mathilde de Morny, one of the first women to identify publicly as being a man, in Colette, with Keira Knightley and Dominic West. Last year she started in the small screen in a RTÉ-BBC revenge thriller Paula.

Gough was born in 1980 and is one of 12 children; her younger sister Kelly is also an actress. Her father was an electrician, then a fisheries expert and her mother “was pregnant for nine and a half years”, Gough has joked. She left school at 15 and “followed a boy” to London. Years later she began a Saturday acting class and later got a place at the Academy of Live and Recorded Arts in Wandsworth (she borrowed the audition fee), graduating in 2003.

Her television debut was in Casualty in 2004 and she has been in series including New Tricks and Stella. Other work includes the play The Painter and TV mini-series Messiah V: The Rapture.

She was nominated in 2012 for Evening Standard Awards for roles in Our New Girl and Desire Under the Elms. Her breakthrough role in People, Places and Things at the National Theatre in 2015 won her great attention and critical praise.

Since the establishment of the Tony awards in 1947 there have been numerous Irish nominations, starting with Siobhán McKenna, nominated in 1956 for Enid Bagnold’s high comic The Chalk Garden and in 1958 for Morton Wishengrad’s Nietzschean drama The Rope Dancers.

In 1970, Tomás Mac Anna’s Borstal Boy won three Tonys, for best play (the autobiographical novel by Brendan Behan, who had died in 1964, was adapted for stage by Frank McMahon), best direction for Mac Anna, and best leading performance by Frank Grimes.

Hugh Leonard’s Dublin comedy Da swept the boards in 1978 winning Tonys for best play, director, actor and actor in a featured role. Cork-born designer Bob Crowley, who was working in England, won a Tony in 1994 for a revival of the musical Carousel , and more recently won again for his design in John Tiffany’s staging of Once in 2012.

In 2006 the Gate Theatre’s revival of Brian Friel’s Faith Healer, had one win - for Ian McDiarmid’s Teddy - and three nominations. Conor McPherson’s The Seafarer was nominated in 2008 and Jim Norton won for his performance. Irish set  and costume designer Bob Crowley has won seven Tony awards, including in 2015 for his work on the musical An American in Paris.

The Tony Award – the Antoinette Perry Award for Excellence in Broadway Theatre – recognises excellence in live Broadway theatre. The nominations were announced on May 1st by actors Leslie Odom Jr and Katharine McPhee. The awards will be made at the 72nd annual ceremony on June 10th , hosted by Sara Bareilles and Josh Groban at Radio City Music Hall in New York.

Farinelli and the King

Harry Potter and the Cursed Child

Best Revival of a Musical

Once on This Island

Best Revival of a Play

Best Book of a Musical

Best Leading Actor in a Play

Mark Rylance, Farinelli and the King

Best Leading Actress in a Play

Best Leading Actor in a Musical

Best Leading Actress in a Musical

Hailey Kilgore, Once on This Island

Best Featured Actor in a Play

Best Featured Actress in a Play

Best Featured Actor in a Musical

Best Featured Actress in a Musical

Best Scenic Design of a Play

Jonathan Fensom, Farinelli and the King

Best Scenic Design of a Musical

Dane Laffrey, Once on this Island

Best Costume Design of a Play

Jonathan Fensom, Farinelli and the King

Best Costume Design of a Musical

Clint Ramos, Once on This Island

Best Lighting Design of a Play

Paul Russell, Farinelli and the King

Best Lighting Design of a Musical

Jules Fisher and Peggy Eisenhauer, Once on This Island

Best Direction of a Play

Best Direction of a Musical

Michael Arden, Once on This Island

AnnMarie Milazzo and Michael Starobin, Once on This Island

Sound Design in a Play

Sound Design in a Musical

Peter Hylenski, Once on This Island

Special Tony Award for Lifetime Achievement in the Theater