Cyprus Avenue and The Plough and the Stars: the best theatre of the week 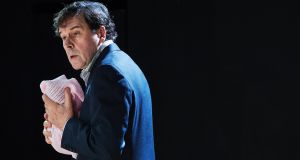 Cyprus Avenue: Stephen Rea is in David Ireland’s provocative comedy on the Peacock Stage at the Abbey Theatre

Cyprus Avenue
Peacock Stage, Abbey Theatre, Dublin; from Monday, April 30th until Saturday, May 19th, 8pm; €30/€25; abbeytheatre.ie
“This is a safe place,” a psychiatrist tells Eric Miller, the sullen Belfast loyalist at the centre of David Ireland’s provocative comedy from 2016. “Here it’s okay to say anything you want to say. About anything.”

As a playwright whose scabrous work has often explored the mindset of loyalism, Ireland rarely sticks to safe places, and it takes Eric – played with masterful melancholy by Stephen Rea – roughly 60 seconds to test her patience. For Eric nowhere is safe: with both his identity and the future of unionism under threat, the unimaginable has happened: Gerry Adams has disguised himself as Eric’s newborn granddaughter to infiltrate the family. “It’s very unusual, yes,” he agrees, with grave concern.

The greater provocation of Ireland’s play is to make Eric’s identity crisis stand for the predicament of loyalism, a culture defined through rigid opposition, and the challenge for the Abbey and the Royal Court’s coproduction, directed by Vicky Featherstone, is to move beyond comedy and bring the audience deeper into his paranoid delusion.

Rea, who presents a man as alarmed as he is convinced by his beliefs, does well with monologues of painfully funny isolation. But, beyond Eric, Ireland is prone to both underwriting (in thinly conceived women characters) and ludic overwriting (such as a prolonged visitation from an absurd “angel of the UVF”), while Featherstone’s production seems to prefer the anchor of realism, making the play’s later transition into horror harder to pull off.

Ireland’s play, though, is a bold undertaking, a neat inversion of tragicomedy, which – unlike the doomed Eric, who can define himself only in opposition – is able to be two things at once.

The Plough and the Stars
Gaiety Theatre, Dublin; until Saturday, May 5th, 7.30pm (Saturday matinee 2pm); €21-€46; gaietytheatre.ie
The Abbey’s 2016 production of The Plough and the Stars, dutifully staged during the centenary of the Easter Rising and revived now to appear in London and Dublin, takes a long view of history. Sean Holmes’s vigorous and pacy staging brings Seán O’Casey’s characters blinking into the light of the present, intermingling periods and delivering O’Casey’s words in voices closer to our own. As one character puts it, that creates “a fierce an’ fanciful idea that dead things are livin’ and livin’ things are dead”.

If the aesthetic here is impoverished, it’s the poverty of our era: a tenement of rising scaffolding and hoarding, bargain furnishings, a Plough constellation emblazoned on the rear wall in light bulbs. Borrowing as much from epic theatre as brash postdramatic devices, characters speak in direct address, songs are pumped through microphones, and the stage is strewn with trash. It ain’t subtle: the show opens with a consumptive Mollser coughing up blood over a copy of Amhrán na bhFiann, for instance. Nationalism, it all suggests, is a shaky performance.

But the cast here is excellent. Kate Stanley Brennan makes a courageous Nora, given an earthy, deep-toned realism, and Hilda Fay now takes over from Eileen Walsh as Bessie, the cantankerous unionist given a grim and heroic tragedy in the shadows of history.