Jazz comedy that plays with space and form

In ‘Chezzie’s Chance’, the conceit is that audience and actors are at a jazz gig 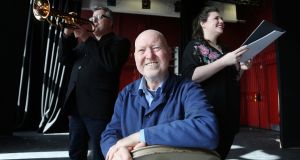 If, as Shakespeare asserted, all the world is indeed a stage, then playwright Dave Duggan is making the most of it.

His work has been staged on a Border road, in a courthouse, a dental hospital, a shopping centre, a hardware shop, and a former army barracks – as well as on stages across Ireland.

Duggan quotes director Peter Brook as his inspiration: “I can take any empty space, and call it a bare stage.”

His latest play is both set in, and performed at, a jazz festival.

In Chezzie’s Chance, a comedy starring Conor O’Kane and Orla Mullan which debuts at the City of Derry Jazz Festival in May, the central conceit is that the audience are at a jazz gig, and so are the actors.

“It’s about being open to the opportunity that spaces offer,” says Duggan.

“I’ve been going to the City of Derry Jazz Festival as a punter for years and it’s great gas, there’s lots of craic about it, and I remember sitting at a couple of concerts and gigs and thinking, there’s a play in here.”

The music is provided by the renowned jazz trumpeter Linley Hamilton and his trio, and is interspersed with the dialogue to create that jazz festival vibe.

For Duggan, the effect is to “superheat” what he terms “the drama of everyday life”.

“I have a sense I’m living in a drama all the time,” he explains.

“Every bit of banter, craic, social engagement is like we’re ‘on’ somewhere, and maybe that’s just living in a supercharged kind of way in my own head, but I do have a sense we’re ‘on’ all the time.”

Duggan has been performing in non-theatre locations since 1996, when The Shopper and the Boy – one of his Plays in a Peace Process series – toured community centres, Orange halls, and pub lounges.

He likes to say that it opened in the Foyle Arts Centre in Derry and then “toured the ’states. That’s the estates – Shantallow, Nelson Drive, Irish Street,” he clarifies, listing different areas of the city.

“That’s the model,” says Duggan. “Small and medium-scale professional productions where there’s high quality acting performances and everybody gets paid.

“It is slightly different from being on the Border with a Border play, or being in a courtroom with a courtroom drama, but it’s part of that spectrum of activity.”

That spectrum has taken him to Dublin’s dental hospital for AH6905 – about a man who has an operation to have the truth cut out of him – to a country lane on the Derry/Donegal border for a play about a cartographer drawing the Border, and to Derry’s Ebrington barracks for Still, The Blackbird Sings (2010) which explores poet Francis Ledwidge’s time at a soldier there in 1916-17.

A recent revival in 2016 saw the play performed on the barracks parade ground; at the play’s end, when the soldiers dream of escaping their posting to the Western Front by fleeing to the city and freedom of the Donegal hills beyond, they gesture towards the view that Ledwidge would have looked out on 100 years ago.

For Duggan, location bestows additional artistic opportunities – and means of expression – which are unavailable in a purely theatrical setting – but he stresses that “it’s not either or”.

“It’s not anti-formal theatre spaces, it’s just part of a range of spaces where you can put plays on.

“All these plays have been on formal stages as well, but they’re just different there.”

The key is that the locations suit the work, not the other way round

Denizen – about a dissident republican – was originally performed in a shopping centre in Creggan in Derry.

From there, the “obvious” place was the courthouse – which added both a different resonance, and unexpected opportunities.

“The security guards got great fun out of it,” says Duggan.

“At one point we were on a break and I walked back in and one of the uniformed security fellas was up on the performance area shouting out the lines.”

For Duggan, the key is that the locations suit the work, not the other way round.

“If that’s the front end of what you’re doing it will fall flat,” he says.

“I’ve seen work in various places and I’ve thought there’s no point in being there, you’d be better off in a theatre, because going to places like courthouses or shops gives you technical problems, there are problems with sound, problems with sightlines.

That attention has been felt as far afield as Afghanistan. AH6905 – which began touring in small theatres and community centres in Ireland – went to the Dublin dental hospital, and then to Kabul.

He recalls feeling heartened by the photographs which arrived from Afghanistan of the performances – of actors and technicians in a bombed-out former cultural centre and performing in front of the destroyed Buddhas of Bamiyan.

As with all of Duggan’s work, he saw an opportunity to convert an empty space into a stage – with consequences he could never have imagined.

Chezzie’s Chance by Dave Duggan is performed from May 4th-6th as part of the City of Derry Jazz Festival. cityofderryjazzfestival.com