Gordon Snell: We are all lucky that in such stories and characters, Maeve still lives on 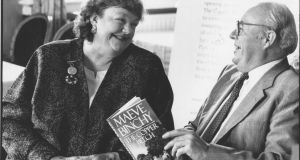 Maeve and I did our writing in the same room, sitting at our laptops each at one end of a long desk below a window. Maeve once said she thought we must look like a popular variety show act of the time, where two pianists played duets side by side, each at his own grand piano.

It must have been this image which led us to the fantasy that because we could type using an alphabet keyboard, we could surely learn to play the piano, reading from a musical score. Maeve even bought a portable electronic keyboard, so that we could start practising for our new career. But a couple of lessons from a friend – who later became a well-known pianist and composer – made us realise that a fantasy was all it was. We were hopeless musicians.

So we went back to the laptops and on with our writing in peaceful companionship. Our working styles were very different. I have to concentrate exclusively on the story or verse I am writing. Maeve was the ultimate multi-tasker. She wore headphones to listen to music or radio programmes, while writing her stories at the same time. She could even break off to have a conversation on the telephone, and then go back and take up the story where she left off.

Audience for each other

Working in the same room meant that we were there as an instant audience for each other, and would round off the day by reading each other what we had written. But we had a firm and sometimes difficult rule: total honesty in our reactions. The reactions were usually favourable but just occasionally we might have reservations about whether a line was funny or a verse scanned, or a character’s behaviour was unconvincing.

You had to give your criticism but there was then a further rule: you were allowed 10 minutes of what we called “sulking time”, when you could go away and think about the criticism, returning to say either that you thought it was all right as written, or that there might be something that needed changing, or further work.

It was a system that suited us very well, and made for a squabble-free working life. It was really part of the professional approach which Maeve always had to her work. She was very disciplined – deciding for instance at the start of each day, what point in the story she planned to reach, or the number of words she would write.

The tough part of a writer’s life is the fact that you have to invent your own discipline and rules, and then stick to them. Even sitting at a desk is full of potential distractions: the cat needs stroking, the books on the shelves need rearranging, or the drawer needs to be tidied. In Maeve’s case, there was always a self-help book handy. She was a devoted collector of such books, on everything from de-cluttering the kitchen to coping with the fear of flying. She said that if she got only one useful tip from each book, it was worth it.

Of course, there are other valid distractions that take you away from the desk: readings, festivals, interviews, book tours and, for Maeve, the films, plays and television and radio programmes which were based on her stories. The television series made from her novel Echoes was one of the first. Much of it was filmed around Dunmore East, and we found plenty of reasons to travel to the locations to watch actors like Geraldine James and John Kavanagh bring the characters to life.

We enjoyed our roles as movie groupies, and were delighted when we were asked to be background diners in a restaurant scene. The story was set in the 1950s, and the wardrobe supervisor asked Maeve to come and be costumed. I rose to go along too, only to be told: “No, you look all right just as you are.”

Later, when Noel Pearson was making Tara Road, we were proud to be asked to play what we liked to call “cameo roles”, this time as drinkers sipping martinis at a bar. Were we in danger of getting typecast, we wondered? People at the premiere who didn’t know us must have been puzzled by the cheers of the audience when that brief scene came on.

It was always exciting to be among the audience for Maeve’s own plays, or theatre or cinema adaptations of her stories: for the Dalkey Heritage Centre’s stage version of her television play, Deeply Regretted By, and Shay Linehan’s adaptations of Aches and Pains and Minding Frankie.

Maeve’s own stage plays, End of Term and The Half Promised Land, showed her talent for dramatic writing, but she was surprised when Jim Culleton of the Fishamble Theatre Company wanted to find a selection of her stories to make a stage show. She gave him three large ring files containing several hundred stories, as well as the books, Central Line, Victoria Line and Dublin Four. He dramatised a number of stories to create two excellent stage shows, Troubled Hearts and Wired to the Moon.

And now we again have the chance to see Shay Linehan’s full-length theatre adaptation of Minding Frankie, which toured the country and came to the Gaiety Theatre with great success last year.

It is extraordinary to see how two actors can create the whole world of characters surrounding Noel Lynch and the baby, Frankie, he takes on the task of bringing up. I feel sure that Maeve would have been delighted to see what a great theatre experience has been made from that story she created sitting at her laptop at the desk in our Dalkey home. We are all lucky that in such stories and characters, she still lives on.

Maeve Binchy’s ‘Minding Frankie’, directed by Peter Sheridan and adapted for the stage by Shay Linehan, returns to the Gaiety Theatre from 8th-12th May and is on a nationwide tour which includes The Everyman Cork. For full details, see mindingfrankie-theplay.com