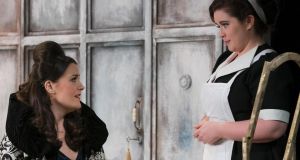 Máire Falvin (Countess) and Tara Erraught (Susanna) in The Marriage of Figaro at the Gaiety Theatre, Dublin. Photograph: Pat Redmond

The wait is over. Irish National Opera, which last year emerged from a competitive Arts Council process as the council’s “preferred provider” of large-scale, standard repertoire opera, presented its first new production, of Mozart’s Le nozze di Figaro, at the National Opera House in Wexford on Friday.  Director Patrick Mason has updated the setting to the mid 20th century when Franco was still in power in Spain. Francis O’Connor’s costume designs colourfully remind us that international fashion taste in the 1960s embraced Mary Quant dresses, psychedelic colours, and the notion of Swinging London’s Carnaby Street.  At the back of the stage, beyond the rotatable side walls of O’Connor’s open, well-lit (Paul Keogan) set, hangs a portrait of Mozart, an obeisance that is well honoured in the performance.   Mason’s direction and Peter Whelan’s conducting both encompass paciness and poise. Mason’s light touch creates the happy illusion of a non-interventionist approach, as if he’s just letting the words and music do the work for him, and the intricacies of the plot are all falling into place by themselves.

Whelan does almost the exact opposite. Under his guidance the Irish Chamber Orchestra in the pit becomes a character in its own right, not just driving and supporting the drama, but effectively commenting on it, too.   Whelan doesn’t just glory in Mozart’s gorgeous writing for wind instruments. He shapes and frames phrases in ways that seem entirely fresh, sometimes generating a growl or a mutter, sometimes acting like a powerful spur to energise the action on the stage.

The brio and the poignancy of the orchestral music-making is well matched by the responsiveness of both singing and acting. Jonathan Lemalu is a resourceful, volatile, quick-thinking Figaro. Tara Erraught is a commanding Susanna, who gives the impression of somehow being always one step ahead.   In the upstairs/downstairs world of the opera they are servants fighting off the unwanted attention that the lustful Count Almaviva is paying to Susanna. It is the fate of their master to be outwitted by them. Ben McAteer conveys youthful brio as the frustrated Count who believes he’s making all the right moves but can’t quite figure out why he is so consistently thwarted.

His put-upon wife has the hardest crosses to bear. And it’s the Countess of Máire Flavin who plucks most successfully at the heartstrings. She delivers some of the opera’s greatest moments with peaches and cream tone and melting sadness.

Aoife Miskelly conveys the hormone-induced antics of the page, Cherubino, with boyish confusion. John Molloy brings superb comic timing to the role of his nemesis, the gardener Antonio. Suzanne Murphy captures the matronly resolve of the housekeeper Marcellina with amusing authority, and Graeme Danby has a bouncing energy as her right-hand man, Bartolo.

Here’s hoping INO can keep up the high standards it’s set in this production.