Akram Khan’s ‘Giselle’ – an astonishing twist on a timeless classic

‘We represent bringing ballet to the widest’ possible audience, wherever they are, whatever their means’ 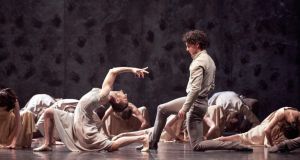 Not a single white tutu or flowery headdress appears in Akram Khan’s Giselle, and dismissing these conventions helps melt away some common perceptions of ballet as an art form. Dancers in Khan’s Giselle wield weapons. Musicians chant from the orchestra pit. Classical Indian movements infuse the more traditional ballet technique presented by English National Ballet in an astonishing twist on this timeless classic.

Audiences more accustomed to visiting companies bringing Swan Lake and The Nutcracker to Ireland may be shocked at this interpretation, yet the collaboration between choreographer Khan, composer Vincenzo Lamagna, and English National Ballet artistic director Tamara Rojo may prove just as compelling as did the original creative team for Giselle more than 175 years ago.

“If we believe that the classical ballets and the issues they represent can stand on their own merit, then they can be re-interpreted,” says Rojo (43)  at the company’s headquarters near London’s Royal Albert Hall.

“I see the dance canon like others see the theatre canon. Nobody bats an eyelash if they take Shakespeare and re-represent it. We must ask, ‘What are the human issues in a ballet and are they still relevant?’ And most of the time they are. That doesn’t mean we have to throw away the past or tradition, but we have to constantly look at it and allow it to breathe.”

The original libretto for Giselle was written in 1842 in France during a time when fascination with romance and the supernatural had reached a pinnacle. A story about the Wilis, or young women who died before their wedding day, captivated poet and novelist Théophile Gautier so much he created the character Giselle for ballerina Carlotta Grisi.

Choreographed by her husband Jules Perrot, the ballet received immediate acclaim following its Paris debut. Not only did it help make Grisi a star (and incidentally whisked her away from her husband and into the arms of Gautier, forming their own love triangle), but it was also one of the first ballets to elevate women out of their traditional ballet slippers and onto the tips of their toes into the now ubiquitous pointe shoe.

Instantly Giselle became a coveted role for ballerinas and has remained so ever since. It provides huge artistic scope in terms of movement but also because of Giselle’s emotional range. Dancers relish the transition from love-struck peasant girl to deceived lover until Giselle finally goes mad and ultimately sacrifices herself for the man who betrayed her.

The score has been re-imagined with only the briefest nod to Adolphe Adam’s original, and Tim Yip, known for his work on the film Crouching Tiger Hidden Dragon, designed the costumes and set, which involves a single massive moving wall. At one point, the Wilis become so unsettled they percussively stomp their feet.

“They make a lot of noise and they use long bamboo-like staffs as weapons,” says Gavin Sutherland, musical director of English National Ballet. “It’s sheer anger, because the Wilis are the spirits of jilted brides, as tradition says.”

Jennie Harrington, a dancer with English National Ballet since 2003, says this Giselle provides constant challenges, particularly in its relentless pointework.

“Akram’s movement is very grounded, which can be difficult because as ballet dancers we tend to be very ‘up’,” she explains. “When he created this, he wanted it to be a joining up of ballet and his kathak background.”

Khan, of Bangladeshi descent, directs his own London-based contemporary dance company, and is in demand worldwide as a choreographer. His movement vocabulary is often influenced by the classical Indian dance form kathak, an ancient way of telling a narrative through movement that emphasises the feet, eyes and hands.

Harrington remembers early rehearsals spending up to three hours solidly en pointe. That intense footwork would push most dancers to the limit, but the mutual respect between Khan and the cast kept them forging ahead to realise his vision.

Commitment to Khan’s concept spread throughout the creative team, as Sutherland recounts a pivotal moment searching for a composer to re-invigorate the score. One candidate wanted to use “instruments” such as foil emergency blankets, brass pieces in an iron bucket, broken china, electric sewing machines and a kidney dialysis machine to accompany the dancing. Sutherland advocated using computer samplers to create these sounds instead, and eventually the pair reached a stalemate.

“That composer said, ‘No no, it must be the real things,’” Sutherland explains. “I said, ‘Mate, we don’t even have enough dialysis machines for the purpose they are built. You want us to take one on tour with us?’”

Eventually English National Ballet commissioned Lamagna to create a new score, after which Sutherland spent up to 16 hours a day translating Lamagna’s pounding, chanting and unusual rhythms into music the orchestra could read and play. He finished just in time for opening night, and despite the challenges of presenting live music, Sutherland and Rojo remain staunchly committed to it.

“Tamara is adamant that live music has to be a priority, and for me that’s the best environment to be working in,” Sutherland says. “No matter how small the ensemble, it can be done.”

During Giselle’s run in Dublin, Sutherland conducts the full RTÉ Concert Orchestra, with whom he has worked before, coaxing some unusual demands from the musicians, such as chanting from the orchestra pit.

Prior to joining English National Ballet in 2012, Rojo, who grew up in Spain, enjoyed a celebrated career as a principal dancer, including more than a decade with Royal Ballet. Although she still performs, she now balances directing, developing audiences and maintaining a solid footing for the organisation as a whole.

“I think one of the most difficult things artistic organisations face is how to take risks and how to be given the chance to fail, because success is not guaranteed,” she says. “You also have to be given the chance to do things that don’t work. And there’s so little buffer in an artistic organisation financially that any artistic risk is a huge risk for all of us. I try to make decisions that I think are reasonable, that I think are not going to put the organisation in an unnecessary position.”

She still makes bold decisions, and hires some of the world’s leading choreographers to work with the company. While we discuss Giselle in her office, downstairs renowned choreographer William Forsythe works with the dancers in a new piece with contemporary music that thumps through the floorboards. Rojo has also spearheaded development of the company’s new state-of-the-art building, slated to open in 2019. With seven studios and a production space in London’s Canning Town, the new space is a coup for any arts organisation.

We represent bringing ballet to the widest possible audience, wherever they are, whatever their means

Rojo follows the illustrious legacy of dancers who previously have led English National Ballet, including founders Dame Alicia Markova and Anton Dolin who travelled around England taking ballet to audiences unable to travel to major theatres. Fast-forward to the present day and the company’s remit remains the same.

“We represent bringing ballet to the widest possible audience, wherever they are, whatever their means,” says Rojo. “I’m very aware of that responsibility, and also of my responsibility to the wider art form. I’m protecting and caring for what has been given to me, but only for some time, as eventually someone else will do it.”

Most recently the more than 60-member troupe has toured throughout England, New Zealand, Scotland and Northern Ireland. The Dublin stop could become a more frequent one for the company if plans by Bord Gáis Energy Theatre general manager Stephen Faloon are realised.

Since arriving at Bord Gáis in 2009, Faloon has programmed reliable story ballets from a variety of Russian companies, sprinkling in shows by Tony award-winning choreographer Matthew Bourne as well as classics by Birmingham Royal Ballet. He still believes ballet is an undernourished art form in Ireland, and remains committed to educating and growing its audiences.

That involves taking chances on productions like this one, and challenging audiences to think beyond what they are used to seeing. He was confident bringing Khan’s Giselle because of his belief in Rojo as “a great forward thinker and creative genius. And because sometimes you just have to take a leap of faith.”

Then he saw Khan’s Giselle on tour. “It was one of the most stunning productions. It was so visceral. I felt like I had been punched around the room for two hours. I came out emotionally drained but feeling like a much better person.”

Those involved hope audiences equally will be moved by watching Khan’s Giselle, and that it will resonate in some way. Rojo emphasises there’s no right or wrong interpretation.

“Give it a chance. It is not what you expected. Come have a good night out and enjoy.”