‘Not a Funny Word’ and ‘Assassins’: this week’s best theatre 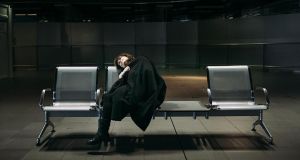 “I can never tell anyone about this,” says Tara Flynn, with light irony. Instead, she makes a song and dance about it.

Not a Funny Word

It begins with a disappointing bit of coitus – not so much interruptus as way too abruptus – and ends sometime later, much more satisfyingly, via a fluid analysis of the nation, shame and acts of compassion. “Sure there’s no way you can get pregnant from an unsatisfactory fumble in lumpy Styrofoam,” she recalls. But pregnant she gets, and in Ireland in 2006 – or indeed anytime – the eight amendment means the only options available when a morning-after pill has failed is to travel abroad, alone and afraid.

Flynn takes us with her, assisted by musician Alma Kelliher, a selection of affectionately irreverent songs, and a recollection of culture, faith and family. There is much about holy Catholic Ireland that is ripe for satire, but not everything: Flynn’s grandfather was finally alleviated from racking scruples by a kindly priest who said, “I take all your sins on me.”

If Flynn’s story does something similar, it is because it is so ordinary – not a national tragedy, or cause celebre, just a regrettable personal situation – the kind that people you know have experienced and have never dared share.

“I can never tell anyone about this,” says Flynn, with light irony. Instead, she literally makes a song and dance about it. Director Phillip McMahon ensures that gesture is neither too grave nor too frivolous. Right now, it makes for essential viewing, and more surprisingly, a joy to watch.

Gate Theatre, Dublin, 7.30pm (Saturday 2.30pm) €27-€42 gatetheatre.ie
“What a wonder is a gun! What a versatile invention! First of all, when you’ve a gun everybody pays attention.” So sings Charles J Guiteau, whose name does not ring out through history quite like the two shots he fired into the back of President James Garfield, in 1881.

With them, however, he became a presidential assassin, guaranteeing infamy and an ignoble immortality. There are, the composer and lyricist Stephen Sondheim knew, many other examples, and based on an unproduced script by Charles Gilbert, he and John Weidman turned the twisted roll call of America’s successful and unsuccessful political killers into a dark musical that conceived of assassination as a fairground game – roll up! roll up! for this macabre American pastime.

Gate artistic director Selina Cartmell has brought the black comedy and contagious melodies of Sondheim to the Gate’s stage before, with a near legendary production of Sweeney Todd in 2007. Now she regroups with musical director Cathal Synnott for something as darkly delicious, giving a platform to the frustrations and ambitions of John Wilkes Booth, Leon Czolgosz, Lynette “Squeaky” Fromme, John Hinkley jnr and Lee Harvey Oswald, among others.

If you’re worried about good taste, you may have missed out on the past century of human endeavour. Anyone else can expect murderously good fun.

Piers Morgan: ‘If Meghan Markle did to you what she did to me, you would be p*ssed off’

8 The guarded words of Trevor Rees-Jones