Ireland 1963: a biography of the ‘most sensational of years’ 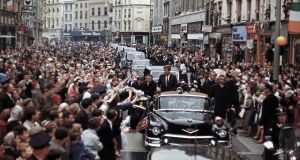 I am an explorer, seeking discoveries long uncharted, unchronicled – people, places, events, missed or dismissed over the years.

By the way, I am also an academic (PhD, history) and retired university professor of 32 years who has written thirteen books on Ireland, mostly Dublin. Admittedly, a rather unconventional social historian in that I do not restrict myself to archival research or traditional topics. Over some 42 summer research expeditions to Ireland, I have taken what some have called a pioneering path – that of an urban oral historian focusing on the lower-income working classes of Dublin’s inner city, including what some Irish journalists used to call the “slumlands”. Outfitted always with my urban exploratory gear: backpack, small Sony tape recorders, street maps, cameras, notebook, pens and collapsible umbrella, and comfortable, durable walking shoes for hard pavement and slick cobblestones.

For a half a century – and still at it now at age 78 – I have explored from the Coombe through the old Liberties to the northside tenement rows. Roaming the streets, prowling around the dark and dusky lanes and mews, always chatting with people along my way. Discovering hearty men and women from their 70s to 90s, willing to sit down with a “Yank” oral historian, who happened also to be Irish-American, over a cup of tea or pint at their local pub – for an hour or two, maybe three, some of which would end up as all-day sessions. Sharing their life story, its joys and sorrows. My book, Dublin Tenement Life: An Oral History (1994), is illustrative of my exploratory research process and the discoveries unearthed.

My new book, Ireland 1963: A Year of Marvels, Mysteries, Merriment and Misfortune, was a  challenge – how to write a lively social history of such a bewildering and paradoxical year. One characterised by a dizzying series of events – an unrelenting roller-coaster ride of dramas, traumas, tragedies, mysteries, happiness and whimsy: one called the “Year of Sensations” by the Irish Press when it finally ended.

To many the year is exclusively associated with JFK’s visit, which lasted for four days. A monumental event, to be sure, its political and diplomatic importance well covered in dozens of books. But what of the remaining 361 days? Most historians are apparently oblivious, except for occasional passing references. “Old-timers”, however, remember vividly the tragic tenement collapses on Fenian and Bolton Streets, the Siberian cold and blizzards, the worst flash flood in Dublin’s history, Beatlemania riots in and around the Adelphi Theatre, angry housewives’ protest marches, the mystery of the amazing wonder horse that suddenly went lame (for a few hours!) only seconds before the start of the big Irish Derby. And how many Irish today know anything of the wonderful, whimsical “Great Walk”, as the newspapers called it? Or the drama of the 30 Irish passengers caught aboard the liner Lakonia “ablaze and sinking” at sea during Christmas week?

My grassroots research meant an exploratory venture in which I needed to try and track down any surviving participants and on-site observers of such events over 50 years ago – now aged 75 or well beyond. I began with my old and reliable contacts from the neighborhoods of the 1960s who I could still find. Then, the many friends I had made with members of the Dublin Fire Brigade and An Garda Síochána over more than four decades. Exploring and searching can be discouraging at first. Persistence and resilience are vital, for it would become an over-three-year project.

After a few months my exploration began to strike gold. Locating first some observers, and then participants, who had actually been on the sites back in 1963. For me, it was a Eureka! moment when I finally tracked down Eamonn Fitzpatrick, one of the first firemen to arrive at the horrifying Fenian Street tenement collapse in which two little seven-year-old girls were buried beneath a mountain of bricks and timbers. To him fell the wrenching responsibility of having to lift in his arms the crushed body of one of the girls buried in rubble. His story, told to me nearly a half a century later, was graphic in detail, and with much emotion.

Shortly thereafter, I had further success when I found Tony Doran, a bus driver who was on duty the day of the shocking flash flood that turned parts of Dublin into vast lakes and submerged cars, all within a few hours of the typhoon rainstorm that struck. His oral testimony was riveting. Then the great, good fortune in making contact with several guards who had been on the elite motorcycle escort team to accompany and protect President Kennedy while on Irish soil – exploratory research does not get any more grassroots. These select guards were within yards of him every day, on their cycles next to his limousine in the motorcade, and right beside him when meeting crowds and attending events. One garda shared with me his experience of suddenly having to lurch forth and grab the president around the shoulders and pull him away from an unseen danger – shocking his secret service men.

Oral testimonies such as these bring an authenticity and immediacy to a social history book – on the spot, in the moment, allowing the author to weave a unique tapestry of a truly extraordinary year.