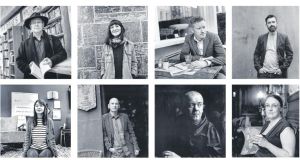 “It is hard to overestimate the value of small sums to people on low incomes, as most writers are,” said Anne Enright. “What is small change to some is a month’s rent, also known as four writing weeks, or pure luxury, in the writer’s world. Literature Ireland helped me survive as a writer through the hard years of my 30s and early 40s. It also provides seed money for a rich harvest, which is the reputation of Irish writers in Europe, as well as further afield. For a small investment, the cultural, political and personal returns are very high.”

While Irish literature punches well above its weight, beyond the Anglophone world, its reach has been greatly enhanced by the work of Literature Ireland, a not-for-profit organisation funded by Culture Ireland and the Arts Council and led by Sinéad Mac Aodha. Since its foundation in 1995 Literature Ireland has funded the translation of more than 2,000 works of Irish literature into 56 world languages. Like most arts organisations, Literature Ireland’s funding suffered badly during the downturn. The value of the grants it awards has halved over the past eight years, and it has to turn down seven out of eight translation grant applications.

To celebrate the work of the latest wave of authors who are being published in translation across the globe with its support, Literature Ireland will next week launch First Lines, a promotional series of postcard-sized portraits by acclaimed photographer John Minihan, best known for his portraits of Samuel Beckett. Beckett was one of those rare writers capable of translating his own work. A BBC radio producer notoriously rejected his translation into English of En Attendant Godot as too full of Irishisms. Asked once if he was English, Beckett famously replied, “Au contraire”.

Mike McCormack, winner of the €100,000 2018 International Dublin Literary Award for Solar Bones, will launch the portraits and the 2018 edition of New Writing from Ireland, Literature Ireland’s compendium of the best Irish writing available for translation. “Literature Ireland is the most important and articulate advocate for Irish literature abroad,” McCormack said. “I can personally attest to its effectiveness and professionalism in ensuring that my work has been promoted and translated in several countries. And at a time when cultures the world over are retreating into narrow nationalisms, it is of vital importance that Literature Ireland carry the song and story of Irish writing all over the world.”
This article continues after the photographs

My town is nowhere you have been, but you know its ilk. A roundabout off a national road, an industrial estate, a five-screen Cineplex, a century of pubs packed inside the square mile of the town’s limits – Colin Barrett, Young Skins

He’s running, running, running. And it’s like no kind of running he’s ever run before. He’s the surge that burst the dam and he’s pouring down the hillslope, channelling through the grass to the width of his widest part – Sara Baume, Spill Simmer Falter Wither

There I was now. In a room, a tidy room, tidier than any room I been in before. The bed was hard. The walls gave no sound. A heavy window thumped itself shut. Good I says. Peace I says – Gavin Corbett, This Is the Way

When I think of Ireland, John Paul Finnegan said as we stood on the deck of the ferry while it pulled out of Holyhead, I think of a limitless ignorance. And not just an ignorance, a wallowing in ignorance, akin to the wallowing in filth of a pig or a naked, demented savage – Rob Doyle, This Is the Ritual

He dragged barbed wire away from the post, clearing a space on the parched earth, and took a photograph from the pocket of his tunic. He pressed the picture against the post and held it in place with string, covering the woman’s hair and neck, but not her face – Audrey Magee, The Undertaking

He left the boy outside its own front door. Farewell to it, and good luck to it. He wasn’t going to feed it anymore; from here on in it would be squared shoulders and jaws, and strong arms and best feet forward – Lisa McInerney, The Glorious Heresies

From the fence behind the house, Kate could see her husband up at the old forestry hut where mottled scrubland gave way to dense lines of trees. ‘Colman!’ she called, but he didn’t hear her – Danielle McLaughlin, Dinosaurs on Other Planets

I am the cancer ridden only son of a dangerous driver who has thoughts about turning herself into a man. The cancer is in my testicle. The left one – Alan McMonagle, Ithaca

I was born the day the Troubles started. ‘Wasn’t I, Ma?’ says me. ‘It was you that started them, son,’ says she, and we all laugh, except Our Paddy. I put that down to his pimples and general ugliness. It must be hard to be happy with a face like that. I almost feel sorry for him – Paul McVeigh, The Good Son

It was around about then that the door started banging. The wood shook with the banging. So did the letterbox’s brass-plated inward flap. Even the cutlery in its open drawer, the delft drying on its drainer, seemed to tremble a fraction – Conor O’Callaghan, Nothing on Earth

Bobbi and I first met Melissa at a poetry night in town, where we were performing together. Melissa took our photograph outside, with Bobbi smoking and me self-consciously holding my left wrist in my right hand, as if I was afraid the wrist was going to get away from me – Sally Rooney, Conversations with Friends

Literature Ireland has enabled the translation of works by Samuel Beckett, Edna O’Brien, Enda Walsh, Eimear McBride, Colm Tóibín, Sarah Crossan, Eiléan Ní Chuilleanáin, Kevin Barry, Máirtín Ó Cadhain, Nuala Ní Dhomhnaill, Anne Enright and Marina Carr among many others. These writers have found new readers internationally, building their international profiles and providing them with a valuable source of income. In addition to the translation grants, Literature Ireland also supports the international aspect of Irish writers’ careers by seeking out international literary festival and residency opportunities for them. This work is complemented by the organisation’s investment in the career development of literary translators, through residencies and bursaries, ensuring that Irish writers are being translated to the highest possible standard.

Sara Baume, one of the authors featured in First Lines, said: “Literature Ireland has been utterly vital to my career, mainly overseas but also at home, in both obvious and more intricate ways. The work it does supports the books I’ve already written, but it also provides me with opportunities – to travel to festivals overseas, to connect with fellow writers and translators and to discover new reading – which in turn provides me with material and insight which I carry back home again to my desk, and which enriches my work in every form and on every level.”

In 2016, Danish translator Signe Lyng was awarded a three-week residential bursary by Literature Ireland, to support her translation of Lisa McInerney’s The Glorious Heresies, a novel filled with potentially hard-to-translate Cork slang and vernacular. Lyng travelled to Cork to get a sense of how people speak, ensuring her translation was sensitive and considered. She has gone on to translate works by Sara Baume, Mike McCormack and Donal Ryan, two of whom she discovered while on the bursary and convinced her publishers to buy the rights for.

“Given its linguistic complexity, my writing struggles to find foreign language publishers willing to take a risk on embarking upon the task of translation,” says Eimear McBride. “Literature Ireland has frequently stepped into the breach, providing both encouragement and incentive for them to do so. Without Literature Ireland I would not be published abroad as extensively as I am, nor would I have had the same opportunities to forge cultural links with foreign writers and literary audiences.”

Martin Doyle is on the board of Literature Ireland