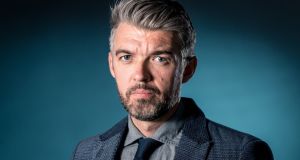 Nick Laird: the highlights of his new book are love poems and city poems for the Information Age. Photograph: Roberto Ricciuti/Getty Images

Autocomplete is not the finest poem in Nick Laird’s excellent new book Feel Free (Faber, £14.99), but it does lay out a problem which his poems set about resolving with relish. “Begin with the others and do what they do,” it tells us, though this poem will not settle for default and borrowed phrases. “The wax seal,” he continues, “began as a personal stamp of authenticity / before it grew into a tool of the administrators / used to represent you”. Imitation and replication turn suddenly sinister. If other people’s signs and words retain a life of their own, it becomes impossible to say exactly what you mean with them. The language which connects us also imprisons.

The quarrel in this book is between the language-loving poet for whom one phrase deliquesces into another and the more hard-bitten and judicious figure of Autocomplete, who holds language to account, who wants an ethical warrant for his aesthetic skill. That ethical prerogative is there in poems on the besetting public horrors of Laird’s immediate environments, Grenfell in London, the residue of war in Northern Ireland, race in America and the refugee crisis: these subjects might be said to call for the blunter, more direct treatment they receive.

But the highlights of the book are love poems and city poems for the Information Age: the poet’s situations and relationships – as a father, a son, a husband – are sized up and filtered through different kinds of brilliantly manipulated language, often tuned to a distinctive acoustic, an assonance that depends on short vowel sounds.

Feel Free, the title poem, is typical: lucid, scattered with analogy, it seems to surprise itself as one phrase (“sensational loss”) or tone (“interface”) follows another, all of it charged with a sort of dispersed urgency:

To deal with all the sensational loss I like to interface

with Earth. I like to do this in a number of ways.

I like to feel the work I am exerting being changed,

the weight of my person refigured, and I like to hang

and to that end I set aside a day a week, Shabbat,

Similarly compulsive and inventive are The Vehicle and the Tenor, The Cartoons, Cinna the Poet and Crunch, which includes this blocky passage: “I say poetry is weather for the mind / not an umbrella. I say take Star of Bethlehem for shock, mustard seed for the deep / gloom occasioned for no earthly reason. You’d like to see me alphabetised into / my rightful places and the files archived. I’d have you used in combinations of / adjectives and verbs and nouns I’m certain you deserve.”

Feel Free, Laird’s best book yet, features other less flamboyant but equally good poems, including an affecting sequence for his mother, The Folding, and hard, gem-like lyrics, Watermelon Seed and Glitch, and La Méditeranée, which shows his gift for finding original images:

of the sea bass on your plate,

its aureole lens, its lightless pupil

the universe itself in place

The poet-novelist is as rare a creature as the yeti: the hyphen between the two arts is a see-saw usually tipped heavily in favour of one or the other. Since he died in 2014, Dermot Healy’s reputation has been augmented by the republication of his brilliant novels. Now his Collected Poems (Gallery, €17.50/€25) reminds us of his parallel life as a poet.

Patrick Kavanagh’s sudden flashes of lyric talk and Michael Hartnett’s poise are evident influences in his first collection The Ballyconnell Colours (1992), but Healy’s own note – intimate, lonesome, interested in the world around him and delicately observed – is also struck in neighbourly elegies like The Next Room, in which Maisie, the memorable protagonist of his memoir The Bend for Home appears,

coughing in her old room above Main Street

where she used to sit looking into three mirrors

with the radio out loud. Surrounded by powder balls,

Healy’s gift for vivid scene-making is matched by the way his best poems drift into more meditative stanzas, as this one does:

We take the next room

with us everywhere, the unoccupied room

where they all live

whom we have met,

who lived out part of their lives

a little way along the stairs from us.

Taking death as his starting point and rationale, Healy’s poems value the ability to “catch” and somehow sustain another’s presence. In what may be the best of his five collections, What the Hammer (1998), this elegiac imperative is directed at the friends and neighbours his work consistently celebrates but also at his own condition and at the persistence of the natural world.

His fascination with birdsong surfaces in poems whose rhythms imitate their subjects’ song, blackbirds, starlings, swans, a tern, a wheatear, a gull, or the irresistible Litany of the Wagtail: “chirp of the flirt, / scurry through the blur […]morning tuning fork, / skiff of the field. // Breast of the hailstone.”

His long poem A Fool’s Errand experiments formally: each of its 81 parts mixes short and long lines to mimic the V of geese which is the poem’s subject. Although this ambitious long poem has its admirers, its set form encouraged Healy into stragglier philosophising which crosses into the territory of Four Quartets, a high bar for any poem concerned with time and repetition.

His posthumous collection, The Travels of Sorrow, is a patchwork: slight, comic poems are engaging enough but Healy’s true power and bravery are better seen in The Last of Our Name, where his concern with cycles and repetition, which had been cast so often in terms of the natural world of migration and tides, suddenly takes on an uncomfortable psychological acuity, recording a family’s complex and interminable break-ups and reconciliations as both cyclical and unalterable: “The old war is rowing in / on the next wave”.

Healy will be remembered for his great novel A Goat’s Song, but this Collected Poems will do more than appeal to that book’s readers, and leaves its over-sized footprint in the world of contemporary Irish poetry.

‘My legs, stomach and solar plexus turned to jelly when Aretha Franklin started to sing’
Real news has value SUBSCRIBE