The Achill Mission Colony and the rise of narrative nonfiction

John Rainsford talks to Patricia Byrne, who transports readers back to the past 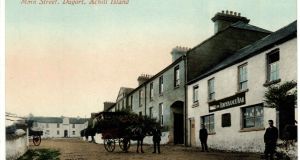 The main street of the Achill Mission Colony

Take the story of an “unhinged” leader who establishes a base in a remote location in order to promote religious conversions whilst simultaneously denouncing his critics as “cannibals”.

Describing himself as a new Martin Luther (to his critics Oliver Cromwell!), the Reverend Edward Nangle (1800-1883) founded a colony on Achill Island nearly two centuries before the notorious “Screamers”.

Now, Mayo-born Patricia Byrne has reanimated his life story into a fascinating “must read” entitled The Preacher and the Prelate: The Achill Mission Colony and the Battle for Souls in Famine Ireland.

“Narrative non-fiction or narrative history (a form of fact-based storytelling), is based upon factual material drawn from historical research, but written using fictional techniques, such as character development and scene building,” explained Byrne.

“It is a style that has become prominent in recent decades as per the iconic In Cold Blood (1966) by Truman Capote. While participating in the MA in Writing at NUI Galway, I began to develop work in this genre before publishing my debut book, The Veiled Woman of Achill: Island Outrage and A Playboy Drama (2012).”

The latter explores the case of the infamous James Lynchehaun, convicted of viciously assaulting an Achill landlady, but whose subsequent folk-hero status would surely rankle with today’s Me Too generation.

Bringing such dystopian characters back to life, however, clearly appeals to Byrne, who spent over five years researching and writing her latest work.

“Edward Nangle appeared to have suffered ill-health since the death of his mother as a child and suffered a complete breakdown while serving as a young clergyman in Cavan in the 1820s,” said Byrne.

“He was also imbued with Evangelical Protestantism which spread across Ulster in the 1820s and 1830s in what became known as the Second Reformation and featured “end-of-days” millenarian beliefs about a Second Coming.

“However, from the beginning of his time in Achill Edward Nangle was complaining about poor health in his diary and as editor of the Achill Missionary Herald (1837 to 1868). Indeed, at the start of the Great Famine, he was absent from home for several months due to ill-health. Many of the symptoms he describes indicate signs of a manic depressive illness.”

Immediately upon his arrival in Achill in 1834, and being granted land by the landlord, Sir Richard O’Donnell, he set up scriptural schools for the teaching of Protestant doctrine. By the spring of 1847 his colony was feeding 600 children a day in such schools and he employed up to 3,000 labourers the following year; clearing land, building roads, and expanding the colony’s infrastructure.

That same year 220 tons of Indian meal were purchased by the mission for £2,200 from Philadelphia to feed 2,000 people. Dr Neason Adams, the colony’s resident physician, also attracted much praise for the humane way in which he and his wife Isabella cared for those on the island.

Such good deeds were subsequently tainted by their association with religious proselytising, however.

‘The Finger Of God’
The author of A Short and Simple Explanation of the Book of Revelation of Jesus Christ, published in the 1840s, Nangle, saw “the finger of God” in natural disasters such as the “Night of the Great Wind” (January 6th, 1839) and the Great Famine (1845-1849).

Idolatry spawned by Catholic Emancipation (1829), and a British government Bill to fund the Catholic seminary in Maynooth (1845) had rightly incurred the wrath of God, he believed.

When the potato crop failed in Achill, he decided to feed children through the Achill Mission schools. However, this inevitably led to an avalanche in demand for admission and charges of “souperism” (offering inducements in return for religious conversion). Nangle was now branded a “soul-buyer” and a “Black Protestant”.

Although only several hundred people converted to Protestantism in Achill, during Famine times (population 7,000), such conversions gave rise to conflict within the community, and externally with followers of the Archbishop of Tuam, John MacHale (1789 -1881).

Byrne said: “[The latter] was equally aggressive. For example, towards the end of the Famine, he organised public events whereby islanders who had ‘gone over’ to the Mission, publicly confessed the errors of their ways and returned to the Catholic faith.

“MacHale also placed aggressive clerics in Achill [Fr John Dwyer called for bodily violence against the ‘heretics’] in order to spearhead the fightback. He also recruited Franciscan monks to establish a rival monastery and model farm in the townland of Bunnacurry on the island.

“In recent years, as a result of a healing service organised by the local Catholic and Protestant communities, white crosses were erected at St Thomas’s Church in Dugort (on the graves of those who converted during the Famine, but who were buried originally without headstones).”

The local cemetery, at Sean Reilig, on the slopes of Slievemore, is also the final resting place for Nangle’s first wife, Eliza, and six of their children, victims of the Island’s harsh environment.

From the 1860s onwards the Achill Colony went into decline, not helped by a costly legal dispute between the trustees, who differed about the direction of the Achill Mission. The Irish Church Act (1869) and the Land Act (1881) also adversely affected income generation.

Nangle died in Dublin in 1883, almost two years after the death of his lifelong sparring partner, Archbishop MacHale. The public animosity and jousting between these two larger-than-life characters powers the mainsail of Byrne’s creative narrative.
The Preacher and the Prelate: The Achill Mission Colony and the Battle for Souls in Famine Ireland is published by Merrion Press, at €14.99. For more information about the author, visit patriciabyrneauthor.com

Narrative nonfiction: what the experts say
Publisher Conor Graham has noticed a distinct increase in the popularity of narrative nonfiction accounts. Memoir, literary memoir and quirky or lesser-known historical events and figures are increasingly catching the readers’ imagination.

In fact, this trend played a crucial part in his decision to establish Merrion Press, which has had bestselling successes with books such as Markievicz: A Most Outrageous Rebel (2016) by Lindie Naughton and, now, Patricia Byrne.

Graham commented: “Historical figures and events have proved to be a source of great inspiration and ready-made settings for fiction writers. Hilary Mantel’s books on the court of Henry VIII – Wolf Hall (2009) and Bring Up the Bodies (2012) – have had huge critical and commercial success.

“Robert Harris’s book An Officer and A Spy (2013) retold the story of the Dreyfus affair while Pompeii (2003) and Imperium (2006) saw him go back to Roman times. They say the past is another country and for the Irish and international book-buying public, it seems to be a territory that they never tire of exploring.”

Combined with a growing demand for creative writing courses, more and more readers are immersing themselves in material once held to be the preserve of academics.

Ivan O’Brien, president of Publishing Ireland, elaborated: “Narrative nonfiction is a very strong area in publishing, whether it’s history, biography or even sport. A good writer can tell a story in a way that a conventional history book just can’t, generating real word-of-mouth interest which is gold-dust for publishers.

“While reviews and media appearances by authors are important, nothing compares to a friend saying that you simply have to read a particular book. Unlike many other books, they can stay on the shelves for many years, keeping otherwise obscure historical events fresh in the public mind. Narrative nonfiction is also a strong area for export and ebook sales, being driven by reviews and reputation.”

Prof Joseph O’Connor, McCourt Chair of Creative Writing at the University of Limerick, concluded: “The novelist must be a storyteller first, and a chronicler only second or third, if that, and so, when composing a story set in the past, it is utterly vital to bring every storytelling resource to the work.

“The facts are not enough. We want to know what it felt like: how the food tasted, the smells in the air, what music people were listening to, what made them laugh. In this way, the writer brings us into a world, rather than merely describing it.”