Asking For It and The Kite Runner: This week’s theatre highlights

An Irish rape case exposes a culture of victim-blaming in the stage adaptation of Louise O’Neill’s novel; repressed desires drive a boy’s own story from Kabul to San Francisco 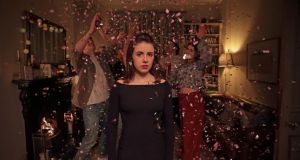 Lauren Coe as Emma in Asking For It. Photograph: Hugh O’Conor

In these alternately distressing and galvanising days, you have to remind yourself that Louise O’Neill’s breakthrough novel, Asking For It, was inspired by real events abroad rather than a prediction of grim events reported more recently at home. An account of an 18-year-old girl, Emma O’Donovan, raped at a house party by the sports stars of her school, and distrusted in the fallout by the divided community of her picturesque Cork village, it will have an unsettling timeliness for as long as rape culture exists. That the town should devolve into victim-blaming in O’Neill’s story is characteristic of close-knit tribal protectors, but the complexity of O’Neill’s fiction is to make its victim flawed from the beginning – disloyal, low on self-esteem, using sexuality for approbation – while also blameless. It asks us to understand the difference.

Already the inspiration for a television documentary and in the process of being adapted for the screen, the book now reaches the stage in an adaptation by the terrific writer Meadhbh McHugh. How to depict such a story, which the book distends through individual perspective, drunken blackouts and social media shaming, presents an intriguing challenge for Landmark and the Everyman’s co-production, and the excellent director Annabelle Comyn. Such accounts rarely come without controversy, but given uncanny, discomfiting similarities with real life, how can anyone still have difficulty believing them?

In sexually repressive cultures, desires don’t disappear – they transform. That isn’t necessarily healthy: you don’t need to look far in Irish culture to find examples of human urges sublimated into tormented religious devotion. All of which makes it easier to understand the breathless peaks and harrowing lows of The Kite Runner. It begins as an Edenic recollection of boyhood friendship in Kabul, before the Soviet invasion, between an affluent Pashtun boy and his benignly submissive Hazara boyservant, Hassan. It plummets, like Amir’s strutting kite, through layers of transfixing brutality, shame and repudiation when he watches his friend raped by the local bully, then inveigles to have him banished, and – moving from Kabul to San Francisco, an evocative transformation – obsesses about him forever after. Literature of veiled eroticism has a fascinating appeal, carrying the thrill of discovery for awakening desires, but on stage it can lose subtlety. Matthew Spangler’s theatre adaptation is bright and beaming, a memory play given the exotic tinge of Afghan iconography and, as the plot grows more melodramatic, the camp displays of a musical. To those who appreciate the encoding of a love that dare not speak its name, that only makes it more touching.