‘Screams that could be heard all over the prison’ 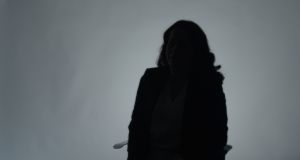 Kilmainham Gaol and courthouse reverberate with a presence from past events and lives. While the gaol is inextricably linked in the public mind with the 1916 Rising, its old courtroom had a whole other existence as a county courthouse until 2008, bearing witness to generations of ordinary and often traumatic lives.

The courtroom, dating from 1820, was Kilmainham district court for nearly 200 years; it was renovated as part of the 1916 commemorations.

The Trial is a temporary collaborative artwork in the courtroom, around the history of healthcare and human rights in the Irish criminal justice system. It seems a perfect place to present an exploration of historic and contemporary prison experiences, as the setting mirrors the intent of The Trial, looking at prison experience – in the past and more contemporarily – from multiple perspectives.

Three actors – Tommy O’Neill, Charlie Kinsella, Neili Conroy – appear on multiple screens in the courtroom, speaking, responding, interrupting each other, along with text from historical documents.

They tell real-life stories of those incarcerated or working in Irish penal institutions in the 19th and 20th centuries: experiences of solitary confinement, separation from family, forced child labour, mental and physical health, and of children in St Patrick’s Institution, Dublin.

The slickly-edited videos are in a 20-minute loop, and the viewer can drop in and out or watch the lot. Visitors on its first day seemed to engage for long periods, following the narratives intently.

Some of The Trial has a chilling effect, alternating staccato-like between, for example, a 1963 confidential report about abuse at St Patrick’s Institution, and the findings of an investigation later that year into the allegations. The contradictory statements, from actors on the synchronised screens, have a dramatic and disturbing effect.

“He had a nervous breakdown.”

“Such conduct is often the opportunity to strike an officer in public.”

“Instead of medical treatment. He was tied up in leather. A contraption called muffs.”

“Some boys are strongly schizoid.”

“Given a beating. Which lasted about two hours.”

“We can find no evidence to support any charge that any boy was ‘stripped naked’.”

“Screams that could be heard all over the prison.”

“The chaplain has never seen a boy beaten or heard sounds that a boy was suffering.”

“Made them beat him more.”

“Statement such as ‘crashed down on the boy’s head’ or ‘stood on the boy’s face’ are unfounded and manifestly so hysterical as to be absurd.”

Visual artist Sinead McCann wanted “to see what would happen bringing an artist, a group of academic historians and people who have spent time in prisons together, to look at healthcare in prisons”.

It arose from research by UCD historians Catherine Cox and Fiachra Byrne, as part of a Wellcome Trust-funded project “Prisoners, Medical Care and Entitlement to Health in England and Ireland, 1850-2000”. Using historical documents from 1840s, 1960s and 1970s and two case studies from the 1880s, McCann directed and the produced The Trial, and worked in collaboration with theatre of the oppressed specialist Sarah Meaney with former prisoners in the Bridge Project in Dublin, who wrote scripts about their own experience of healthcare in late-20th-century Irish prisons.

The Trial, in collaboration with video production company Sixbetween, isn’t a documentary, but an intriguing merging of research, contemporary experience and artistic expression, creating a short immersive flow that offers another layer to a Gaol visit.

Historian Catherine Cox says: “In the history of Irish prisons, most focus is on the political. As a social historian I’m interested in the larger cohort of the prison population, who had a different experience of the prison system, who are in for different reasons.”

In documents from 1840s till 2000, “we noticed recurring themes around healthcare and mental health, and then continuities in talking to people incarcerated more recently. We look at what that says about people who have transgressed, and do they have rights to healthcare. It’s a question we are posing, asking people to reflect on.”

Kilmainham was not used as a Gaol after 1924; it was taken over by OPW in 1986. As well as a museum, it’s a regular performance space and film location, and this is the first such use of the refurbished courthouse. Gaol director Niall Bergin is interested in artists and historians “seeing the space differently and taking it to another level”.

He says: “Kilmainham Gaol is not just about guided tours, but people are influenced and inspired by the space in so many ways. And visitors are engaging with something they might not have thought about. But it happened, and so often, in this building. The general visitor will be thinking of nationalist history and 1916. But this was a county jail. Watching this, I think people will think about that social element, and what happens and what was going on behind these walls.

“This is so appropriate for Kilmainham Gaol.”

The Trial runs at Kilmainham Gaol until April 26th (but may be extended). Visitors can include it on their tour, and others can see it free without the tour (book on Eventrite.ie)