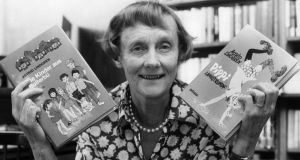 Swedish writer Astrid Lindgren: was tuned to upheavals for young children. “It isn’t easy for them to adapt, although it can look like that. They just resign themselves to superior forces.”

In the winter of 1941, in an apartment in Stockholm, a little girl called Karin Lindgren came down with pneumonia. As she lay in bed, her mother Astrid alleviated her boredom by telling her stories about a funny and fearless little girl with amazing strength. The stories were a hit, and not just with Karin. Soon her friends and cousins were demanding more tales about the girl who would later be described by a Swedish literary critic as “a mixture of Huckleberry Finn and Superman”.

In 1944, Astrid Lindgren presented Karin with a special 10th birthday gift: a typed and bound version of the adventures of Pippi Longstocking. A year after that, Astrid, who had already published two well-received children’s books, asked her editor if she’d like to have a look at the stories Astrid had written for her daughter. The rest is children’s literature history. Pippi Longstocking became one of the most popular children’s books of the last century, and its author’s life would never be the same again.

Jens Andersen’s lively and insightful biography, translated beautifully from Danish into English by Caroline Waight, traces Lindgren’s life from her idyllic childhood in rural Småland through her experiences as a young single mother and on to her life as a major literary and public figure in Sweden. If, like me, you grew up reading about Pippi and Karlsson-on-the-Roof and Ronia, the Robber’s Daughter, you won’t be disappointed by Andersen’s exploration of Lindgren’s life and work. But even those who are utterly unfamiliar with Lindgren’s writing will find much to intrigue and enjoy in this affectionate and thorough portrait of an extraordinary woman.

In a note for her biographer, Margareta Strömstedt, in the 1970s, Lindgren decried the commonly held notion that children easily adapt to new situations, remembering Lasse’s distress at the many upheavals of his early childhood. “It isn’t easy for them to adapt, although it can look like that. They just resign themselves to superior forces.” Andersen argues convincingly that the focus on children who are in some way lonely or isolated in Lindgren’s novels springs from her concern for Lasse – even the exuberant Pippi’s adventures end with her friends Tommy and Annika glancing through the window and seeing Pippi sadly sitting alone by candle light.

Outside her fiction, Lindgren wrote repeatedly about the effects of early trauma on later life. Indeed Andersen places Lindgren’s work not just in the context of (mostly Scandinavian, understandably) children’s literature at the time, but in the context of contemporary ideas about child psychology. Lindgren herself repeatedly said that Pippi’s character fit in with Bertrand Russell’s belief that children are driven by the “will to power”, but Lindgren’s brilliant encapsulation of youthful power fantasies didn’t go down well with some critics, teachers and parents, who described Pippi’s adventures as “unsavoury”, “depraved”and “deranged”.

Despite or, more likely, because of all this, children loved them. Lindgren became hugely famous in Sweden, appearing regularly on radio. As she grew older, she became an active campaigner on issues from taxation to animal welfare and ruffling plenty of official feathers while she did it. Andersen paints a sympathetic portrait of a briskly kind, unsentimental and generous woman, a woman who wrote eloquently about both loneliness and the joy of solitude.

There are a few times when Andersen’s grasp of the narrative becomes a little clumsy – the story sometimes skips forward in time in a way that could lead readers reader to wonder if they’ve missed something. But that’s a small quibble. Not every writer gets the biography he or she deserves. But with this witty and humane book, Jens Andersen has given Astrid Lindgren just that.