Meghan Markle biography: a fairytale princess story to send you to sleep 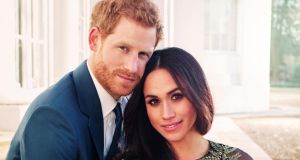 Britain’s Prince Harry and Meghan Markle: As if in response to being left lingering in paparazzi limbo, Morton peppers the book with snide references to Markle being a consummate networker and social climber. Photograph: Alexi Lubomirski / Handout via Reuters

The British journalist Andrew Morton, best known for Diana: Her True Story, based on tapes recorded by the tragic princess in 1992, detailing her fairy-tale misery, has rolled out the parchment once again with Meghan: A Hollywood Princess, an unauthorised biography of the latest royal scalp, Meghan Markle.

When Markle and Prince Harry tie the knot in May, the actor, activist and former United Nations women’s advocate will be the first biracial American divorcee to wed an English prince.

From a “bloodline of slaves and kings”, “picking cotton under the blazing sun”, to “taking her wedding vows to a royal prince” this is an “extraordinary story of upward mobility”, trumpets Morton, like an endangered elephant, at the start of this tedious, wholly unrevelatory book.

Pages of purple prose catalogue Markle’s antecedents, finally arriving at her father, who became a successful lighting designer in Hollywood and married Markle’s mother, a woman with “liquid brown eyes and a jaunty Afro”, at the Self-Realization Fellowship Temple on Sunset Boulevard.

Leaving no rhinestone unturned, we trudge through the putative princess’s early years, including her triumphs at her $22,000-a-year grade school (where she excelled in yoga and quantum physics) and her precociously well-developed sense of social justice, campaigning to have a sexist television commercial changed when she was barely old enough to work the remote control.

Once Markle had her dental work complete, Morton tells us, she got some head shots and went to Hollywood. At this stage, it wouldn’t be unreasonable to imagine that the book might ignite, but once again the narrative ploughs on through endless detailed descriptions of everything from the struggling young actor’s obsession with chia seed pudding to how she exited and entered her banjaxed car through the boot. And did you know that during her stint as a human bag-holder on Deal or No Deal, she ate pizza “with no fear of bloating”?

The quantity of pointless trivia fails to disguise the fact that this biography is entirely toothless. Morton got nowhere near Markle, her immediate family or any of her close friends. Even her former husband, Trevor Engelson (who, Morton tells us, was once chastised by a colleague for standing too far back from the urinal because he didn’t want to get splash-back on his Italian suit), didn’t dish the dirt, despite the fact that Markle, at the end of their marriage, buggered off with the couple’s $500 Vitamix blender.

As if in response to being left lingering in paparazzi limbo, Morton peppers the book with snide references to Markle being a consummate networker and social climber who has used her looks, talent and successful lifestyle blog, The Tig, to climb the greasy pole of celebrity. One of Morton’s few contributors, Markle’s old schoolfriend Ninaki Priddy, describes her as “calculated” and “strategic”, claiming that “Once she decides you’re not part of her life, she can be very cold”.

Brrr – that was worth wading through a couple of hundred pages for.

Eventually, nine chapters in, Markle finally meets Harry. No longer the deeply unhappy, angry drunk of popular perception, this is a man who has “retained the affection of the public”, which “instinctively sympathised” with him despite his penchant for dressing up as Hitler or cavorting naked in a Las Vegas hotel while playing strip billiards. Poor Harry, they felt, so unlike his brother, William, who was “enjoying the simple joys of family life . . . with the support of a sensible and stable wife to see him through the dark nights of the soul”.

Luckily, “it was clear that he had reached a crossroads in his life and his days of sowing wild oats were coming to an end”. So the young couple went to Botswana, and somewhere under “the shimmering carapace of the stars”, Markle, Morton grudgingly concludes, “understood him as a man, not a title”.

One of the many books littering the shelves as the H&M wedding nears, Meghan: A Hollywood Princess is, to quote Morton himself, little more than a “feverish summer fling that would not endure winter chills”, a biography that will surely send even the most avid royal-watchers into a deep and soundless sleep.