A complex, compelling portrait of one of the most intriguing women in western literature 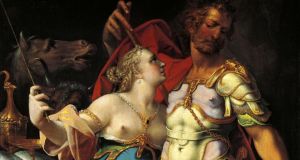 The daughter of a sea nymph and the Titan sun god Helios, Circe is doomed to immortality

Circe doesn’t take up much space in Homer’s Odyssey – the visit to her island takes up just 15 pages in Emily Wilson’s 2017 translation – but the sorceress who turns men into pigs makes an indelible impact. Since her story was first told several thousand years ago, she’s inspired countless artists and writers from Ovid to John William Waterhouse. In her new novel Circe, Madeline Miller, who won the Orange Prize for The Song of Achilles in 2012, offers a refreshingly complex and utterly compelling portrait of one of the most intriguing women in western literature.

Miller, who has an MA in classics from Brown University, draws on a wide range of ancient Greek and Latin sources to tell Circe’s story. Like its classical source material, the novel is episodic, but this structure perfectly conveys one of the novel’s central themes. Circe is immortal, which means that any relationships she may form with humans, from Daedalus to Odysseus, can only be temporary. They will always age and die, and she will have to move on without them, beautiful, powerful and alone.

The daughter of a sea nymph and the Titan sun god Helios, Circe begins her life in the halls of her father. When she was born, she tells us, “the name for what I was did not exist”. Is she a nymph? A goddess? The truth, as it turns out, is something entirely new. Despised by her divine family, Circe discovers her powers of sorcery when she turns a human fisherman into a god. When he spurns her for another nymph, Scylla, Circe transforms her rival into a horrific sea monster who becomes the sourge of all sailors – an act that will haunt Circe for the rest of her life. Circe is exiled to a lonely island, where she spends centuries honing her craft.

But she’s not totally isolated. She visits Crete, where her cruel sister Pasiphae gives birth to a monster that will become legend, and where Circe bonds with the inventor Daedalus. They work together to contain the Minotaur, combining Daedalus’s human skill and her sorcery. Miller’s depiction of what it feels like to work magic is extraordinarily vivid and convincing – after Daedalus gives Circe a beautiful loom, she is struck by the similarities between working with textiles and with spells: “the simplicity and skill at once…your hands must be busy, and your mind sharp and free”.

Circe must return to her island, where she is visited by her intense niece Medea and her husband Jason, an encounter which reminds her of her own loneliness. Not long afterwards we discover what turned her into the seemingly capricious sorceress of Book 10 of the Odyssey, who turns visiting sailors into swine. This is dark magic born of cruelty, described in scenes of unflinching horror, and for a while Circe’s pain threatens to consume her. Then along comes wily Odysseus, and everything changes yet again. But where can your story end, when you’re going to live forever?

This is, of course, a ripping yarn, and in other hands Circe could have been an ancient Greek equivalent of Marion Zimmer Bradley’s sprawling 1983 bestseller The Mists of Avalon, which tells the story of Arthur through the eyes of Morgan le Fey. Which wouldn’t necessarily be a bad thing. But what elevates Circe is Miller’s luminous prose, which is both enormously readable and evocative, and the way in which she depicts the gulf between gods and mortals.

The Titans and Olympians in the novel feel both disturbingly alien and utterly convincing. Miller writes of divinity as a quality that can be felt, expressed and, in the case of Circe, sometimes resented. Crucially, Circe never feels like a modern woman. She is the product of an ancient and immortal world, who begins by feeling repulsed by humans and gradually comes to realise that mortals can grow and change while her fellow immortals are doomed to find variety only in manipulation and destruction. Circe can be part of that cycle of cruel and pointless conflict, or she can choose to break it. In this unforgettable novel, Miller makes us care about that magical, mythical choice.

Dan Aykroyd and John Landis: How we made The Blues Brothers
Real news has value SUBSCRIBE