The worst film titles of all time 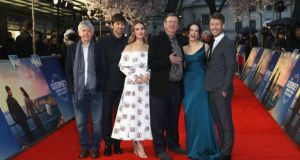 Over the last few weeks, if you went among the film community, you’d find critics, distributors and exhibitors mouthing certain apparently unrelated words to themselves as they went about their business. The Jersey Eel Pie and Literary Collaboration? The Guernsey Cross-stitch and Horseshow Casserole Supremacy? No, that’s not right. The Guernsey Literary and Potato Peel Pie Society. That’s it. (You are a true friend, Mr Cut ‘n’ Paste.)

Derived from a popular novel by Mary Ann Shaffer and Annie Barrows, TGLAPPPS has already been intstalled as favourite to win the prestigious award for worst movie title of the year. By the time you’ve asked for the film at the box office, you’ll have missed the trailers, the credits, all of Guernsey and most of the pie. Eager to draw in the readers who made TGLAPPPS a hit at book clubs, the producers can be forgiven for shedding not even the smallest syllable from the title. The Glappers (as I have just decided to call them) can be a fearsome bunch when roused.

Here’s another thing. Maybe TGLAPPPS is a better title than it initially seems. After all, it has got the film further notice. You’re currently reading an article inspired by that title alone. If it had been renamed Potato Peel Pie or The Guernsey Literary Society then a whole strain of media chatter would have been shut down. You might not be able to remember TGLAPPPS, but you can pick it out on a website, and the lady in the box office will know what you mean if you say “that Guernsey Pie thing with yer wan out of Cinderella”.

The ungainly, lengthy title usually gets that way on purpose. The producers are seeking to attract attention through creative verbosity. The folk behind Beeban Kidron’s To Wong Foo, Thanks for Everything! Julie Newmar - a drag queen romp from 1995 - were surely aware they’d gone beyond the customary three or for words and strayed into the realm of compact essay. The picture did only modestly well at the box office, but we’re still talking about the title.

There are more than a few films in that category. You know them as “Oh that thing. Something, something /[KEY NOUN/], something, something, /[key adjective/]. It had that bloke in it.” The film you call “Blah, blah, Hippopotamus, blah, blah, blah. You know? With Joan Collins” is actually Anthony Newley’s Can Heironymus Merkin Ever Forget Mercy Humppe and Find True Happiness? The title is the only thing arguing for its immortality.

Ulu Grosbard’s Who is Harry Kellerman and Why is He Saying Those Terrible Things About Me?, an interesting Dustin Hoffman oddity from 1971, has also retained some small notoriety by being so titled.

Borat: Cultural Learnings of America for Make Benefit Glorious Nation of Kazakhstan and Dr. Strangelove or: How I Learned to Stop Worrying and Love the Bomb manage to win on every front. The titles are jokes. The films are good. Nobody is required to bother with the bit that comes after the name of the film’s central character.

Every now and then, a film gains a few extra words it could happily do without. Recall the grim 2010 awards season when presenters were forced to describe Lee Daniels’s breakthrough as Precious: Based on the Novel “Push” by Sapphire. Nobody apart from Sapphire herself can have much liked that. Just imagine if the latest cosy wartime Brit flick was titled The Guernsey Literary and Potato Peel Pie Society: Based on The Guernsey Literary and Potato Peel Pie Society by Mary Ann Shaffer and Annie Barrows. There’d be no room for disingenuous media quotes on the poster. From beyond the grave, the author of a great philosophical novel insisted upon Mary Shelley’s Frankenstein for the 1994 version of that text. There were so many apparent progenitors - producer, director, author – that it may as well have been titled Francis Ford Coppola’s Kenneth Branagh’s Mary Shelley’s Frankenstein. Just a thought.

The habit of slapping mad titles on films to draw punters’ attention reached its high period during the drive-in boom of the 1950s and 1960s. Working with limited budgets, hoping for no great longevity, skid-row producers flung all sorts of disingenuous clutter at their posters. Who wouldn’t want to see a film titled Jesse James Meets Frankenstein’s Daughter? Only a roaring bore would swerve his convertible away from Attack of the Giant Leeches. The Robot vs The Aztec Mummy may not have delivered all it promised, but, by the time it had properly got going, you were already misting up the windows. The more ludicrous the title, the more likely punters were to pull up and park.

It doesn’t seem as if Zack Snyder and his team were playing the same game when they released a 2010 picture called Legend of the Guardians: The Owls of Ga’Hoole. They actually thought it was a good idea. Dreamer: Inspired by a True Story, inspirational horse guff from 2005, wasn’t making with the snark when it added that bizarrely unnecessary post-colon explanation. They were worried about something that wasn’t worth worrying about.

Yet even those nag at the brain. The worst titles of all are, perhaps, not the ludicrous, paragraph-long epics, but the banal commonplace phrases that refuse to lodge in the brain. I actually had to look up that Robert De Niro and Drew Barrymore Christmas flick from a few year’s back. Yes, it was called Everything’s Fine (it’s gone again). What was that one with Jennifer Aniston and Aaron Eckhart? Love Happens? Okay then. You could have poked my feet with sharpened bamboo for a week and I would never have remembered that. Love Happens may be a more economical phrase than TGLAPPPS, but the title of the Aniston film didn’t generate a tenth as many conversations.

The best movie titles take ordinary words and fit them to memorable rhythms that resonate for decades: All About Eve, The Big Sleep, Sweet Smell of Success. Or they take single words and, by isolating them, give them raw power: Psycho, Jaws, Chinatown. Once in a while a title like Snakes on a Plane generates its own cult, but, as was the case with that rum exploitation flick, the online buzz rarely translates at the box office.

Oh, it’s hardly worth fretting over. These days, the real money goes to colon-heavy franchise sequels whose titles fail to trip off even the hugest tongues. Avengers: Infinity Wars. Jumanji: Welcome to the Jungle. Pirates of the Caribbean: Dead Men Tell No Tales. All is forgiven, Isle of Man Poetry and Apple Core Pudding Conflagration.