School’s out: 20 things to do around Ireland over the Easter holidays 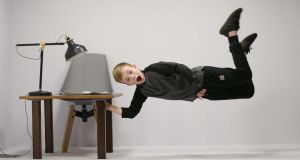 Explorium: defying gravity at the sport and science centre in south Dublin

Easter may be late this year, but, with signs that spring is springing, the two weeks off school means there’s a chance to get out and about for some family time together, whatever the ages of your family. Here are 20 things to see and do.

museum.ie
The museum’s four locations – archaeology on Kildare Street in Dublin 2, decorative arts and history at Collins Barracks in Dublin 7, natural history on Merrion Square in Dublin 2, and country life at Turlough Park, in Co Mayo – have a line-up of family events over the Easter break. For older teens and adults, the exhibitions Alison Lowry: (A)Dressing Our Hidden Truths, an artistic response to the legacy of mother-and-baby homes and Magdalene laundries, and Marching on the Road to Freedom: Dáil Éireann 1919 are both at Collins Barracks.

glucksman.org
In 2018, as curators of the Venice architecture biennale, Yvonne Farrell and Shelley McNamara asked 16 Irish architectural teams to reimagine iconic works by international architects from the 20th century. That show is now on tour as Close Encounter, and it’s one of the biggest displays of architectural talent seen in Ireland. It’s at the Glucksman gallery at University College until June 30th.

3 Music at the Academy

4 Get out on a greenway

greenway.ie, visitwaterfordgreenway.com, southerntrail.net
Take a spin along the Great Western Greenway, Ireland’s original traffic-free hiking and biking trail, which runs along the old railway line from Westport to Achill, in Co Mayo. It’s a terrific amenity for a day out or around which to build an active break. Or try Waterford Greenway, a spectacular 46km trail along the old line between Waterford and Dungarvan, Co Waterford; or the Great Southern Trail, a 40km cycling and walking trail via Rathkeale, Ardagh, Newcastle West and Abbeyfeale, in Co Limerick.

ark.ie
Are you a snakes-and-ladders superstar? A chess champion? A Monopoly master? The Ark’s free Game Plan exhibition, which opens tomorrow and runs until June 23rd, includes some of the most enthralling games from the V&A Museum of Childhood’s outstanding collection. In the Ark’s workshops, children can, among other options, make their own clay Xs and Os game pieces with the ceramicist Maeve Sookram.

taytopark.ie
Holiday activities at the theme park and zoo in Ashbourne, Co Meath, including an egg hunt on Easter Sunday; arts and crafts; and free face painting. For younger children the park has the Grand Carousel, Lady Bird Loop and Nissan Driving School. Older children and adults can ride the Cú Chúlainn Coaster, try Ireland’s largest flume attraction, the Viking Voyage, tour the Tayto crisp factory, or visit the zoo.

pilgrimpath.ie
Now in its sixth year, Pilgrim Paths Week, which runs from April 19th to 28th, is based on Ireland’s network of medieval pilgrimage routes. Some are one-day events, others multiday outings, and walkers of all denominations and none are welcome. This year includes walks at Cnoc na dTobar, in Co Kerry; St Kevin’s Way, in Glendalough, Co Wicklow; Tóchar Phádraig, in Co Mayo; and St Finbarr’s Pilgrim Path, in Co Cork.

events.dlrcoco.ie
The Mad Hatter’s Tea Party starts at 1pm in Deerpark, Mount Merrion, on Easter Sunday, April 21st. It’s part of Dún Laoghaire-Rathdown County Council’s family day, which also includes Curious World, an Alice in Wonderland-themed trapeze show, treats on an Easter trail, the Teacup Ride and a prize for the maddest hat at the Tea Party, in a hatwalk fashion show (or join the Make and Do team to create one on the day).

cadbury.ie @CadburyIreland
The Cadbury Hop-Up Shop, at the Arnotts department store on Henry Street in Dublin 1 until Holy Saturday, April 20th, will feature chocolate eggs falling from the clouds, being sorted and collected into giant tubes. Families can build customised Easter-egg-hunt packs. Entry is free, but with small people it could be impossible to avoid a purchase. (You can choose six products for €8.) There’ll also be a Cadbury Easter egg hunt and entertainment, in support of Barnardos, on Merrion Square, Dublin, on Good Friday and Holy Saturday, 10.30am-1pm and 2-4.30pm.

hookheritage.ie
The Co Wexford lighthouse – the world’s oldest original still operational lighthouse – has free family events, starring Captain Hook and Pirate Pat, on Easter Sunday and Monday, from 1pm, including games on the lawns and chocolate treats. There are art-and-craft workshops through the holidays, from 11am daily, as well as guided tours. It’s a great place to picnic, too.

belfastcity.gov.uk/events
Belfast’s Lord Mayor, Deirdre Hargey, hosts a free family fun day at City Hall tomorrow, from noon until 5pm. With the theme of A Belfast for All, it includes arts-and-crafts workshops from India, Japan and Mexico, funky carnival-themed arts and crafts, street theatre and performances from the ArtsEkta Chinese lion dancers, Streetwise samba band, Belfast Ukulele Jam and Kids Together Belfast.

coolplanetexperience.org
This Easter the hunt for renewable energy is on at Ireland’s first interactive climate-change experience, with twice-daily 75-minute workshops that challenge seven- to 14-year-olds to make their own solar-powered bunnybot. April 15th-26th, €20 per child, including materials. The regular Cool Planet Experience explores what is making our climate change, the science behind it and how you can help create a healthy future.

13 Go to the theatre

abbeytheatre.ie, smockalley.com, bordgaisenergytheatre.ie
For the adults in the family, Ulster American, David Ireland’s new satire at the Abbey Theatre in Dublin, costs €20 all next week (Monday, April 15th, to Saturday, April 20th). Jimmy Murphy’s new play, The Seamster’s Daughter, at Smock Alley from Monday, April 15th, until Saturday, May 4th, promises a challenging drama about a woman who dreamed of meeting her birth father but discovered she was conceived through rape. For all age groups, War Horse, the British National Theatre’s acclaimed adaptation of Michael Morpurgo’s book about the first World War, seen from the perspective of Joey, a cavalry horse, is back at the Bord Gáis Energy Theatre, in Dublin, until Saturday, April 27th. Worth seeing alone for the extraordinary life-size horse created by Handspring Puppet Company.

nli.ie
The National Library’s excellent Seamus Heaney exhibition, Listen Now Again, at Bank of Ireland Cultural & Heritage Centre, on College Green in Dublin, has a puzzle trail for children aged six to 12 at 11am on Wednesday, April 17th. Free tickets via EventBrite.

15 The Deadly World of Opera

irishnationalopera.ie
In what sounds like a great show for all ages, Irish National Opera has a series of hour-long performances to introduce people to the genre. Artists from the INO studio will perform operatic music spanning several hundred years, as well as guiding us through some of the curious terminology and traditions. They take place between today and Sunday, April 14th, in five Dublin locations: Inchicore, East Wall, Clontarf, Ballymun and Temple Bar. Free, but booking essential. Part of the MusicTown festival.

explorium.ie
In its first 100 days, Explorium, the new sport and science centre in Sandyford, Dublin 18, has had 50,000 visitors. It features everything from gravity-defying G-Force Bikes and a Tesla coil lightning show to a new outdoor play area. Its new family tickets, for two adults and two six- to 16-year-olds, cost €70 peak and €65 off-peak.

mountcongreve.com
Mount Congreve Estate, just outside Waterford city, is one of Ireland’s most gorgeous gardens, with 30ha of woodland, a 2ha walled garden and a tea room. The estate contains 3,000 different trees and shrubs, including rhododendrons, camellias, acers, conifers, climbers and herbaceous plants. This Easter weekend it has three days of children’s treasure hunts (with 16km of paths to hunt through, they’ll be busy all day), plus, on Easter Sunday, a bouncy castle and face painting. Family tickets cost €20 on Holy Saturday and Easter Monday, and €22 on Easter Sunday.

bewleys.com
The coffee company’s cafe on Grafton Street in Dublin 2 has bunny face-painting, creative colouring and other Easter family activities and entertainment from Saturday, April 13th, until Friday, April 26th, between 11am and 2pm each day.

westporthouse.ie
Westport House, in Co Mayo, has added to its attractions this year with a mini Ferris wheel and a virtual tunnel experience in its Pirate Adventure Park.

And if some of the events over Easter don’t work out, use the time for things you always mean to get to: climb a mountain, spend time in a park, go on a tree-top adventure walk or visit an outdoor heritage site. For other ideas check discoverireland.ie, schooldays.ie, mykidstime.com, irelandsancienteast.com, visitdublin.com and wildatlanticway.com.