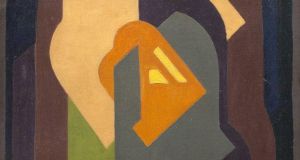 Composition (circa 1922) by Mainie Jellett

How was it done?
It is an exceptionally simplified, even austere work, deriving its considerable energy from the rotational positioning of its interlocking constituent parts and Jellett’s keen judgment of colour and tonal relationships.

Where can I see it?
Mainie Jellett’s painting is included in The Birth of Modernism in Irish Art 1920-1960, an exhibition at the State Apartment Galleries, Dublin Castle (until August 18th), curated by David Britton. The show is packed with familiar names in modern Irish art history, from pioneers such as Jellett, Evie Hone, Estella Solomons, Grace Henry and Paul Henry to Jack B Yeats, John Lavery and Sean Keating, George Campbell, Louis le Brocquy and many more. Crucially, most of the works are from private collections and have scarcely been seen in public before. Great works by Nano Reid, Norah McGuinness, William Scott, Letitia Hamilton and others offer surprising new insights into some of the best Irish artists of their time.

Is it a typical work by the artist?
It is a typical and very fine work. Jellett occupies an absolutely central role in Irish art history, and she was pivotal in the development and consolidation of modernism in Ireland. Born in Dublin, the daughter of a barrister and a musician, she studied at the Dublin Metropolitan School of Art and then the Westminster School of Art. A Taylor scholarship brought her, and her friend Evie Hone, to Paris, where they studied at André Lhote’s atelier.

Having absorbed Lhote’s take on cubism, they went on to study with Albert Gleizes, revisiting and working with him annually for a considerable period after their return home. Both Lhote and Gleizes had very particular and rigorous views on cubism and abstract composition – which could be quite mechanical in effect – but Jellett was able to take on board their ideas while infusing her work with her own personality and inventiveness. Throughout the 1920s particularly, she produced numerous outstanding, spare, abstract compositions.

Christian iconography was a constant, however, even during her most abstract phases. Her Catholic faith was a constant mainstay in her painting (Gleizes placed exceptional emphasis on spirituality and in time converted to Catholicism). But despite such religious sentiments, in the relatively conservative cultural environment of 1920s Ireland her work was generally greeted with skepticism and uncertainty.

Her energy, determination and organisational flair, and her absorption in the artistic adventure on which she’d embarked, carried her through and gradually won over elements of an initially uncomprehending audience. With like-minded colleagues, including Hone, Norah McGuinness and Louis le Brocquy, she was a founder of the Irish Exhibition of Living Art in 1943, an exasperated response to the resistance to modernism then characteristic of the RHA. By this stage, though, she was seriously ill and her own work had returned to a more nuanced, representational approach.

My dad the spy: Stewart Copeland on his father’s secret life as a CIA agent
8

Mary Trump on her Uncle Donald: ‘He’s acting on his own racism’
9