Little: This body-swap movie plays out exactly as expected

Review: The old jokes can still raise laughs if enjoyed in the right company 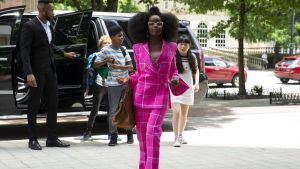 Not this again. Here is a fitful film that revisits one of Hollywood’s commonest and most implausible fantasies. They will keep wheeling out this nonsense about the mean adult who, after gaining empathy for his or her victims, redeems and becomes a kinder, gentler person. Yeah, like that ever happens.

We’re mostly joking. Little is yet another entry to the sub-genre of body-swap comedies that sees a grown-up inhabit a child’s body (or vice versa). It works through most of the familiar clichés. Once again, the protagonist takes an awfully long time to accept the unlikely evidence of her own eyes. But a stunning juvenile performance lifts the film above the pack.

Regina Hall is largely wasted as Jordan Sanders, the boss of an Atlanta tech firm who, bullied throughout school, now abuses her authority to make life hell for all around her. Chief among the oppressed is April (Issa Rae), an ambitious young assistant who fights to get her own ideas heard.

Poor old Regina, a comic performer of some genius, does what she can with all the fourth-generation ball-breaker material, but the film is already wheezing for air by the time she gets transformed into her childhood self.

Young Marsai Martin, one of many talented teenage actors in the TV series Black-ish, is uncannily good as little Jordan. She holds herself exactly like an adult and finesses the punchlines with a skill it should take decades to perfect. It’s not clear how much we’re expected to squirm at the borderline offensive scenes in which she comes on to her dishy teacher (who, we should clarify, is properly horrified), but Martin works so hard its difficult to feel much outrage.

There is some evidence of garden-shear editing. One baffling sequence begins with April and little Jordan enjoying a meal in a posh restaurant and then, with no explanation, cutting straight to them performing a musical number for the astonished patrons. Was a scene excised in which the teenager drinks a glass of wine or two? That’s sounds like a plausible explanation.

Elsewhere, edited to endless jaunty music, shot in sun-blasted primary colours, Little plays out exactly as you expect it to play out. These old body-swap jokes can, however, still raise laughs if enjoyed in the right company. Martin and Rae deliver on that front.