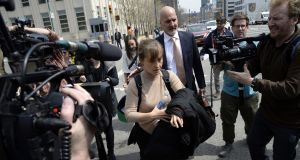 US actor Allison Mack pleaded guilty on Monday to charges linked to an alleged sex-trafficking operation disguised as a mentoring group.

Mack (36) , who is best known for her role as Clark Kent’s friend in the television series Smallville, was one of six defendants in a case filed last year against members of the cultlike group Nxivm.

Some women in the organisation, which was based near Albany, New York, were part of a secret society in which they were branded with the initials of Nxivm’s former leader, Keith Raniere, and forced to have sex with him, prosecutors have said.

“I must take full responsibility for my conduct,” Mack said, sobbing while giving a lengthy statement at a court in Brooklyn on Monday.

In her statement, Mack admitted to recruiting women into the society by telling them they were going to become members of a female mentorship group.

Her goal, she said in court, was to promote Raniere’s teachings and help him further his objectives. To do so, she said, she engaged in criminal conduct.

Mack, who wept as she gave her statement and had to pause to compose herself, apologised to victims of Nxivm’s scheme. Each count to which she pleaded guilty carries a maximum penalty of 20 years in prison. She is scheduled to be sentenced in September.

As a condition for membership in Nxivm’s secret sorority, women were required to offer up “personally damaging or ruinous” secrets, Mack said. The group also collected explicit photos and videos from members as well as rights to their properties, she said.

Prosecutors have said that the women who joined Nxivm’s secret sorority were warned the damaging or embarrassing information they volunteered would be made public if they revealed the existence of the society.

The sect was arranged into circles of women “slaves” that were led by “masters”, prosecutors said. When Mack was arrested last year, officials said that she recruited women into the society as “slaves” and required them to have sex with Raniere.

In court on Monday, Mack admitted that she had obtained “labour and services” from the two women mentioned in the indictment.

The actor, the indictment said, was part of Raniere’s “inner circle.”

Mack told the court she first joined Nxivm, which long billed itself as a self-help organisation, because she was seeking a sense of purpose. “I was lost,” she said.

Almost a year after her arrest, Mack said she had concluded through introspection and “self-examination” that Nxivm’s leader and some of his followers had broken the law.

Others charged in the case include Raniere and Clare Bronfman, an heiress to the Seagram’s liquor fortune.

The trial of the remaining defendants in the case is scheduled to begin later this month. – New York Times

Donald Trump: ‘You meet a woman. In one second, you know whether it’s going to happen’
7