Think opera is only for cultural snobs? A free crash course might help 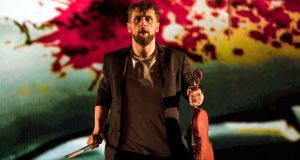 In 1997, conceptual artists Kolmar and Melamid teamed up with composer Dave Soldier to create The Most Unwanted Song. The piece was inspired by the results of an opinion poll which identified the public’s least favourite musical genres. The lead vocals parody the tone and delivery of opera singers, though Christmas music, the bagpipes and the organ have their place, too.

I work in opera. I totally get it. The sound of an opera is so unique and unusual it’s easy to see why people are tempted to write off an artform with 500 years of history.

For a start, the whole idea of opera is pretty insane. The orchestra alone has more people in the pit than you ever see in a play. The singers spend a lifetime developing a vocal technique to create a rich full sound with the power to be heard over an orchestra in full flight. They have to sing, act and follow stage directions while convincingly delivering arias in a language they may not speak themselves. Even with all that the singers and orchestra contribute, you’re still looking at just one of the cogs in the cultural juggernaut that is a fully-staged opera.

I have worked in opera and outreach for a number of years and I’ve met plenty of people who have assumed that opera just isn’t for them. They think it’s a pastime for the kind of cultural snobs who take pride in not knowing what Dancing with the Stars is.

Still, I think I can see where they’re coming from. If you’ve never experienced opera it might seem hard to believe that it could be capable of telling stories that are immersive, down to earth and relevant to real life. It seems like a stretch that opera can you tell a truly realistic story while an orchestra is constantly chugging away, and when the entire cast have given up on regular speech and are instead singing not just to or at one another, but also emoting through song when they are entirely alone.

Yet, when opera is at its best it tells stories that are compelling and universal in a way no other art form can. After all, music and song are part of many important rituals in life, weddings, funerals, and in a completely different, utterly spontaneous way, football matches.

We don’t usually think about this, but our everyday conversations are full of subtlety and nuance, brewed by a mix of emotions and personal experience. Opera uses music and the range and might of the trained operatic voice to lever the essence of human condition into a hyper-reality. The indescribable is made palpable in a way that transcends reason and thought. And sharing such an intimate and nuanced yet sometimes emotionally unfettered experience in a theatre full of strangers is intense stuff. It’s real life with a clout that is off the scale. That is the reason why so many of the great operas have stood the test of time. And the spectacle on stage is dwarfed by the scale of the input that goes into making it possible. The full crew of last year’s Irish National Opera production of Verdi’s Aida came to 250 people.

Opera isn’t all death and love, nor is it always a barrage of severe emotions. It comes in all shapes and sizes, from devastatingly epic romantic tragedies such as Puccini’s Madama Butterly to short, understated masterpieces such as Gluck’s Orfeo ed Euridice. It’s an artform that continues to grow: in 2018 Irish National Opera performed a piece about a musician’s relationship with an online admirer (Donnacha Dennehy and Enda Walsh’s The Second Violinist) and in June will premiere an installation opera by Evangelia Rigaki based on This Hostel Life, Melatu Uche Okorie’s collection of short stories about the experiences of migrants in modern-day Ireland.

Irish National Opera’s The Deadly World of Opera is a one-stop, hour-long crash course that covers three centuries of opera. It explores some of the basic conventions of the artform and explains why they exist. It uses four singers to expose the inner workings of some of opera’s greatest moments. It’s a perfect show for opera virgins, and a great chance for veterans to hear some of their favourite numbers.

You don’t need to dress up for opera. Surtitles mean that you don’t need to learn another language to follow the plot. You don’t even need to have loads of money. Tickets for INO’s upcoming production of Mozart’s The Magic Flute start at €15 and The Deadly World of Opera is free. All you need to do is turn up and be prepared to try something new.