Jade Bird: ‘My mum always said you fly or fall by your own accord’ 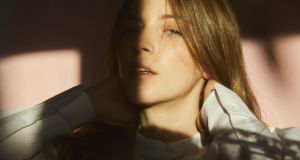 Several months ago, on a bitterly cold day in early December, the British singer-songwriter Jade Bird walked across the Main Street of Dingle from her hotel to St James Church. In the Co Kerry town to perform as part of the annual Other Voices festival, when Bird is on the small church stage she exudes an air of self-confidence that would make impresarios ridiculously rich if only it could be bottled and sold. An hour later, back in her hotel room, it’s clear that Bird’s onstage self-confidence isn’t an act she puts on for an audience. Thankfully, the 20-something singer has a reasoned approach to what self-confidence can turn into if ego is unhindered.

Her life, she will admit, hasn’t been the easiest by which to gain the levels of self-assurance that take you from an uncomfortable situation to one less so. As a child both of her parents were in the British army, her father stationed in Bosnia and Kosovo. By the age of seven, her parents separated, and so she and her mother moved to Wales to live with her maternal grandmother (who was also separated from her husband). As Bird grew up she had witnessed a succession of her mother’s boyfriends act, she says, unacceptably. The results of these experiences have produced their own characteristics, perhaps the major one being a life shaped by matriarchal viewpoints.

You have role models through your life, and the women in my life have survived and thrived. I’d have been stupid not to have learned from that

“My mum brought me up by herself, pretty much. She had me at the age of 20, and my grandmother was a single mother, too, for most of her life. Watching those women be faced with whatever they were faced with, and to come out on top, gave me no excuse not to be independent and ready for what life would throw at me. You have role models through your life, and the women in my life have survived and thrived. I’d have been stupid not to have learned from that.”

Has Bird’s family experiences of broken relationships skewed her own perspectives? “Let’s just say my outlook on marriage is interesting! But then you fall in love and you think, well, maybe it could work. I try not to be too much of a cynic, and that’s what most of my songs are about. Songwriters such as Alanis Morissette write about the constant balance of contradictions, and that’s something I adhere to in my life and work.”

In order to divert her attention from various domestic issues, Bird turned to music – playing the piano from the age of eight, and then writing acoustic-based songs from the age of 12.

“I’d always been a kid that loved literature, reading, writing – anything to do with words – so music was just a path. I loved words, I had a guitar that I learned to play, and writing songs seemed completely natural to me.” All the “transitions” (Bird says this word with an accompanying eye-roll) she was going through around that time, “went straight into songwriting and playing instruments.”

Where did the awareness of writing come from? “My mum. She always read to me, and I’ve loved books from when I was very young. I see magic in conversation and words, and music is purely speaking to others, isn’t it? It’s an open-ended conversation, and one that you rarely get judged on. That can change, obviously, but if you can write something about a moment in someone’s life, then that’s the thing.”

Her songs, she points out, are about such moments. “I’m active in my life, so what I experience isn’t a world apart from anyone else’s. You’re going to find common things. The great writers that I love always seem to be good spectators. In Bob Dylan’s book of poetry, Tarantula, he’s especially good at seeing how other people live.”

What sets Bird apart from many of her contemporaries is her speed of songwriting. “I’m forever writing and sidelining songs. What we will hear on her forthcoming self-titled debut album “has been more or less a process of cutting down many, many songs over the past year. I’d guess the album’s total of a dozen or so has been cut down from about 100.”

I feel that I’m always capable of writing better songs. To say goodbye to a song or songs has never been particularly heart wrenching

That’s an awful lot of songs to have to wade through, isn’t it? Some will surely be of lesser quality than others, I suggest, so how do you gauge quality? Bird has a good response: simply put, persistent honing of your art makes you better. It is also, she notes, “how you get close to the people you idolise, that influenced you in the first place. If you write as much as them, then it’s part of the process to get better and better. Everyone whose music I love is prolific, and besides, you have to write bad songs, too.”

The way she works, she adds, is to combine her instincts with the opinions of people she trusts. “I’ll go into a studio and record about 30 songs that I’ll have worked on over a few months. When they’re recorded I’ll pass them out to my friends and management, and they’ll guide me as to which ones I should hang on to. From there, I’ll play them live and see what the reaction is. If the response is good over a period of shows, then they’ll be earmarked.”

Many songs have lived and died that way, Bird explains in a take-it-or-leave-it manner. Does she ever feel that potentially good ones have, perhaps, disappeared unnecessarily? “Never, because I feel that I’m always capable of writing better songs. To say goodbye to a song or songs has never been particularly heart wrenching. The only time you feel like that is when songs are very personal to you, but it’s quite a tested theory, and ultimately, the shared decisions help the live shows.”

Another encouraging facet of Bird’s creative output is that she carefully avoids co-writing. So many music industry people, she asserts, want perfection.

“Every masterpiece has imperfections or mistakes that aren’t necessarily seen as that. It’s the artists that take risks – Kate Bush is one, Tori Amos another – that get it right. As a songwriter, I think you have to go there, even if people might not like it.”

There was a time, she agrees, when songwriters didn’t need anyone else to help them with a song. Bird mentions classic-era exemplars such as Bob Dylan, Joni Mitchell, Neil Young, and Leonard Cohen, and attributes the prevalent music industry trend for co-writing squads to a lack of confidence.

“It takes a lot for someone to say they’ve written a song on their own and they think it might be good. Wanting to write a song all by myself is a statement. I want to follow in the footsteps of the songwriters I love, and I want the songs to come from me.”

Whatever way the new album works out, offers Bird, as confident in her virtues as her flaws, she can say it has been entirely her work. “It’s no one else’s fault. I’ve done that from when I was a kid – my mum always said you fly or fall by your own accord.”

JADE BIRD ON SONGWRITING AS THERAPY

“It has always been the way for me that writing songs is therapeutic. I’m sure that’s why people connect with other people, because the emotion, the feeling, comes from a certain place. The origins of my self-processing, and then placing that into songs, were the changes in my family when I was younger. As a family, we’ve never had much luck with marriages, so there were lots of splitting up and moving around. My dad is in the army, so as a kid all of that felt as if everything was being seen through bubble pack. Everyone goes through emotional pain, so for me some kind of clarity arrived with music and writing songs.”

Bored in isolation? Two women go to a lot of effort to recreate famous film characters