TV review: The fastidious hoteliers do their best amid glum huts, concrete slabs and scrap metal 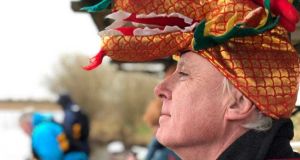 Pity the poor Brennan brothers. Ten years after these fastidious Kerry hoteliers began At Your Service (RTÉ One, Sunday, 8.30pm), their business makeover show, inspecting hapless enterprises with a combination of Francis’s ebullient charm and John’s sepulchral severity, it seems that nobody has learnt their lesson.

Take Claire and Jim of Carrick Camping, on the banks of the Shannon, flooded into submissions when they first started, in 2015, whose business has been drying up ever since.

A campsite that encourages families to disconnect from the soul-sapping slavery of their devices (meaning it has no wifi), it greets the visitor with a cheery view of piled-up concrete slabs and rusting scrap metal, en route to glum little huts and bell tents that boast all the plush comforts of a disaster relief effort.

“Can you define ‘comfy’?” asks John during a brief tour while images of Fyre Festival rampage through his mind.

Were I consulted, I’d suggest simply rebranding as “Zombie Apocalypse Theme Park! ” which would have the additional benefit of seeming Brexit-ready. But the Brennans believe in the power of reanimation.

Carrick Camping – or “Carry On Camping” as Craig Doyle’s obligatory voice over puts it (or “Carrion Camping” if they want to get on board with this zombie idea) – can come back from the dead with just a five-point plan.

Step one, lose the scrap: something Claire could not achieve in five years of trying, but which is accomplished, in half-a day, under the withering glare of John Brennan and his judicious use of the word “diabolical”.

Step two, invest in new huts turned to face the river, and away from their current position peering into the abyss of our own mortality.

Step three, introduce carbon footprint tours, involving bicycle rides from the train station, so that conscientious eco tourists will arrive refreshed and delighted to find themselves staying in a giant car park.

Step four, provide a mural for kids to paint, for free.

Step five, redesign the grounds with landscape gardening, a request that is roundly ignored.

As it stands, there is little to entertain holidaymakers in Carrick Camping, a fact made poignantly obvious by how few jokey activities the programme can make the Brennans do. Sure, Francis takes a quick punt on a dragon boat, resplendent once again in comical Asian headwear, as though trialling ideas for the next season of Francis Brennan’s Grand Tour.

Later we see him get a lift in the campsite’s own fire engine; acquired to delight kids and any other customers comforted to see an emergency vehicle idling in a holiday camp. But that’s about it.

The grand relaunch of Carrick Camping does indeed involve some vastly decluttered views of the Leitrim landscape, a lot of enlivening fresh paint and a bunch of tidier huts.

But you’d need a real surfeit of optimism to agree with Francis that, “if you came now from continental Europe and had your holiday in one of those huts… you’d be delighted”.

In truth, somebody else completed that sentence for him, just as the work itself, the brothers point out, must still be under way.

Somebody needs to tell that to the campsite owners, though. “We’ll be relieved now that it’s all over,” says Claire. “We can take a breather for a while.”

A Brennan’s work is never done.