Singer is recovering from injury sustained while dealing with pneumonia 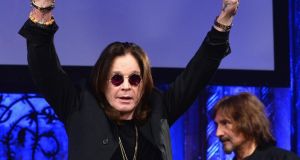 Ozzy Osbourne (left): ‘I’m grateful for the love and support I’m getting from my family, my band, friends and fans, it’s really what’s keeping me going.’ Photograph: Theo Wargo/Getty

Ozzy Osbourne has postponed all his tour dates for the remainder of the year after aggravating an old injury in a fall at his home in Los Angeles.

The former Black Sabbath singer will remain at his home in Los Angeles as he “recovers from an injury sustained while dealing with pneumonia”.

In February, Osbourne was admitted to hospital after experiencing “complications” from flu.

The 70-year-old later postponed the UK and European legs of his No More Tours 2 tour.

A statement on Facebook said the Rock and Roll Hall of Fame inductee’s forthcoming dates would be rescheduled beginning in February 2020.

The veteran rocker said: “I can’t believe I have to reschedule more tour dates. Words cannot express how frustrated, angry and depressed I am not to be able to tour right now.

“I’m grateful for the love and support I’m getting from my family, my band, friends and fans, it’s really what’s keeping me going.

Osbourne was also forced to cancel his Dublin concert date in the 3Arena in January due to illness. He posted on Twitter at the time saying: “coughed so hard I burst a blood vessel in my eye”.

Osbourne, also known as the Prince of Darkness, is the former lead vocalist of heavy metal band Black Sabbath, the group he formed in 1969 alongside guitarist Tony Iommi, bassist Geezer Butler and drummer Bill Ward.

He was due to perform next month at the Rocklahoma festival in Oklahoma in the United States. – PA