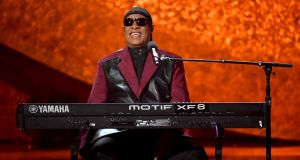 Stevie Wonder is to play Dublin’s 3Arena on July 9th. Tickets, costing from €99.50 including booking and facility fees, go on sale on Friday April 12th at 9am.

Wonder – a singer, songwriter, musician, and producer – is one of the most successful figures in pop. He has had 32 number one singles and worldwide sales of over 100 million. In 1963, aged 12, he became the youngest artist to reach number 1 with Fingertips, Part 2.

He has won 25 Grammys, the prestigious Grammy Lifetime Achievement Award, a Golden Globe and an Academy Award.

The Dublin show is part of a concert series, titled The Stevie Wonder Song Party: A Celebration of Life, Love & Music.