The week’s best rock gigs: From The Specials to Glen Hansard 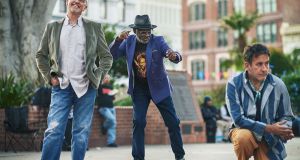 This show isn’t so much an outing for Anoushka Shankar’s much-admired solo work as a celebration of India’s Taj Mahal, as seen in the film Shiraz. With a live score performed by Shankar and her ensemble, and with Shiraz: A Romance of India screening before our eyes, expect a blend of sound and vision that evokes not only the architectural splendour of the mausoleum but also the story behind it. TCL

Homebeat presents: Davy Kehoe
Project Arts Centre, Dublin €13 homebeat.ie
While other Daves might be playing in the Olympia this week, there’s only one Davy and that’s Davy Kehoe. The Irish producer’s debut 2017 album Short Passing Game is a curious but excellently executed fusion of jazz, krautrock and electronica in which he pays tribute to Storm Desmond from 2015 on a track of the same name. Joining Kehoe on the night is Limerick neoclassical artist Paddy Mulcahy. LB

Bodytonic presents: Horse Meat Disco
Wigwam, Dublin €14/€20 wigwamdublin.com
Loosen up the reins and trot on over to Wigwam for a night of unbridled disco from Horse Meat Disco. How could you say neigh? Apologies. Old reliables Horse Meat Disco are regulars to Dublin’s Wigwam club. Coming all the way from Vauxhall in London and inspired by the 1970s and 1980s New York party scene, they’ll tend to all of your Italo disco, house and punk-funk needs. LB

Etta Bond
The Sound House, Eden Quay, Dublin 1 8pm €14.45 thewileyfox.ie/thesoundhouse
This Cambridge UK singer and songwriter has been tipping away for some time (she released her first songs in 2010), but it wasn’t until 2012, with the collaborative EP Emergency Room, that Bond came to the full attention of the UK rap cadre of Labrinth, Professor Green and Mike Skinner. This year Bond will release a wealth of new material, some of which she will be previewing at this intimate show. Tonight marks her Irish debut, so a round of welcome-to-Ireland applause, please, if you don’t mind. TCL

Dave
Olympia Theatre, Dublin €26.50 ticketmaster.ie also Tuesday, April 9
As stage names go, Dave is kind of a bold choice, seeing as most of us probably have six or seven Daves in our phonebooks, but London rapper Dave makes it work. He won the public-vote award for Best Newcomer at the 2017 Mobos, and has gone on to achieve critical acclaim with his debut album, Psychodrama, which hit the No 1 spot in the UK and No 6 in Ireland upon its release in March. Sorry phonebook Daves, there’s a better Dave in town. LB

Just over a year since he released his third album, Between Two Shores, and a fourth pops up to surprise people. This Wild Willing, out in a few days, sees Hansard experiment with song and sound in a way he hasn’t done so since the freaky-deaky years of The Frames. Reviewed in next Friday’s arts pages, the album will appeal to those Hansard fans that like improvisation in the mix, but whether that will appeal to fans of the man’s live shows remains to be seen. Whatever way you like your Glen, however, it’s highly unlikely he’ll disappoint – his gigs are always immersive, always inclusive, always different. TCL

One of the most intriguing albums released last year (and one that received barely any coverage this side of the Atlantic) was Book of Travelers, by American songwriter Gabriel Kahane. Comprising songs inspired by conversations with strangers on an internet-free 9,000-mile train journey through the US – and which began the day after the 2016 US presidential election – Kahane’s music, noted the New York Times, inhabits “a space somewhere between alternative pop and a new urban folk music”. Kahane makes his Irish debut with this show, which by all accounts is equal parts fascinating and intimate. TCL

Sean Bradford
The Workman’s Club, Dublin €10 theworkmansclub.com
Sean Bradford is Houston-born, New Yorker at heart but Berlin-based so the Nomad Tour is the perfect title for his touring electrosoul music. Having already played Simba in The Lion King on Broadway (as you do), his attention is now on making music that’s influenced by Robyn and Nina Simone while bridging the ghastly gap between our emotions and dance music. Support on the night comes from Dublin artists Arbu and Fi and EL.SY. LB

TCD history and drama graduate Liv Monaghan, based in Paris since 2012, turned to singing in various venues in the City of Light in order to supplement further studies. The Cork musician returns to Ireland for several dates in support of her new album, Slow Exhale, a woozy-bluesy mix of jazz, folk and world music. Monaghan’s brief tour finishes on Saturday, April 14th, in Prim’s Bibliotherapy, Kinsale, Co Cork. TCL

Orla Gartland
Cyprus Avenue, Cork €14 cyprusavenue.ie
Dublin singer Orla Gartland, who launched her career on YouTube by covering songs by the likes of Joni Mitchell, Pulp, Fleetwood Mac, Charli XCX, has since made waves with her own original folk-pop music. Her latest single Why Am I Like This? is an essential addition to any new Irish music playlist. If you can’t make it to her Cork show, she’s also playing Sound House, Dublin, on April 11th. Tickets are €16.35 from ticketmaster.ie. LB

The Specials
Olympia Theatre Dublin 7pm €55.65 (sold out) ticketmaster.ie; also Friday, April 12th, Saturday, April 13th (sold out) same venue
The Specials are one of the most enduring inter-racial groups of the past 40 years. The 2019 version may not have original co-founding member Jerry Dammers, but with three members of the original group (Lynval Golding, Horace Panter, Terry Hall) still holding fast, it would be a churlish fan indeed to wish them anything but good luck. A cherry on the two-tone cake is that their recently released album, Encore (their first record in 38 years featuring Hall on vocals), hit the No 1 spot on the UK album charts. Take our advice: enjoy yourself, it’s later than you think. TCL

Erica Cody
Grand Social Dublin 8pm €14.45 thegrandsocial.ie
All good things come to those that wait, and finally Dublin singer, songwriter and producer Erica Cody drops her debut EP, Leoness. Cody launching the five-track EP at this gig, Cody will undoubtedly showcase her skills at blending R&B, hip-hop, neo-soul, and electro via songs as silky and soulful as Over and Over, Where U Really From, Good Intentions, and Lovin’ on Me. We imagine you’ll be most impressed with her style and approach. Actually, scratch that – we know you will. TCL

Born and raised in rural Maine, US, Amber Cross was introduced to the basic tenets of the hymnal via her small-town pastor father and music by her piano-playing mother. Since leaving her home for studies in New Mexico, she has spent the past 15 years gigging the length and breadth of California, supporting such esteemed roots/folk acts as Ramblin’ Jack Elliott, Gurf Morlix and Mary Gauthier. She arrives in Ireland for the first time, wielding her latest and rightly acclaimed album, Savage on the Downhill. Her brief Irish tour (with, unusually, no Dublin date) concludes Saturday, April 13th, with a gig at JJ Harlows, Roscommon. TCL

Dali presents: Wastefellow
Dali, Cork €6 - €10facebook.com/dalicork
Wastefellow is a Dublin-based experimental vocalist and producer and he’s bringing his live audiovisual show to Dali in Cork. Blending left-field electronica and hip-hop, while layering his own vocals, his music lies somewhere on the spectrum between Toro y Moi and Jon Hopkins. It’s the perfect ammunition for a heavy night of dancing. He has played stages at Electric Picnic, Forbidden Fruit and Body & Soul, so this gig might well be the warm-up to a summer of gigs. LB

Michelle Daly
Bello Bar, Portobello, Dublin 8pm €14/€10 bellobardublin.com
Five years ago, jazz/soul singer/songwriter Michelle Daly’s debut EP, Melodramas, assisted the Irish singer’s rise to selling out shows in Berlin and Dublin. As she prepares to record her debut album, Berlin-based Daly (who has collaborated with electronic musician/DJ Nur Jaber, and These New Puritans) returns to her native Dublin for the launch of the album’s crowdfunding campaign. Expect to hear exclusive previews of new songs alongside older tunes. TCL