Director’s Choice: Theatre directors pick the soundtracks of their lives 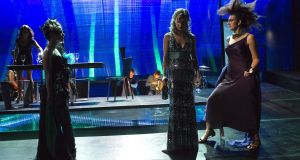 Following the success of the Royal Irish Academy of Music’s (RIAM) presentation Writer’s Choice, in New York, Dublin and Paris throughout 2017, and Artist’s Choice, in Dublin and New York in 2018, the RIAM will mount a similar collaborative programme in 2019 as part of MusicTown, on this occasion entitled Director’s Choice. Some of Ireland’s most distinctive theatre directors will nominate musical works of special personal significance to them and will have them performed by musicians from the Academy. Here, they explain their choices.

Chopin: Prelude in D flat major, op 28 no 15
Piano music has always been my favourite music, and my parents used to joke that Chopin was the only music that would make me stop crying when I was fussing as a baby. Music, for me, is like an index of my memories, and different pieces of music get filed away in my head with happy associations – of people, places and things. Chopin was my mother’s favourite composer, and she passed that love on to me. We had a tape of selections from Deutsche Grammophon to which I still listen, in a new age when tapes are barely even a thing any more. My mother’s favourite piece was the Military Polonaise – mine the Heroic. Both of these were certainly beyond any talent in my fingers, as I realised when I tried to pick them out on the piano, but my piano teacher agreed that we might successfully make it through the Raindrop Prelude. For the Leaving Cert Music practical I played this piece several times a day through fifth and sixth year, and was pleased with my performance for the exam – not least when the examiner commented: “You like that piece, don’t you!” Even if she did have a hearing aid . . . I have barely played the piano since then, having realised I get far more pleasure from listening to others who play it better than I ever could. This prelude evokes many memories for me – of my brother in the next room, of holidays in France, of my final years of secondary school and, most bittersweet, of my mother, whom I still miss every day.

Conor Hanratty is a theatre and opera director. He is currently the Jerry & Dulcy Rosenberg Young Artist Stage Director, sponsored in honour of Tomer Zvulun, at the Atlanta Opera.

Francesca Caccini: The siren’s song from La Liberazione di Ruggiero d’Isola di Alcina
It would usually be a headwreck of a task to choose one piece of music that inspires me, as a musician, teacher of singing, piano and theatre and a director,as there is generally a cacophony of sound in my head. And at home a young horn player, a part-time DJ and an aspiring theatre director make a competitive life soundtrack. However, at the moment I have the joy of working on the RIAM/Lir production of Francesca Caccini’s La Liberazione di Ruggiero d’Isola di Alcina and, although not exactly a catchy title, it contains some of the most beautiful Baroque opera that I have encountered. It was written in 1625, when Caccini was court composer to the Medici court. She was herself a notable singer; the Sienese poet Gismondo Santi, describing her voice in a 15-stanza poem, said: “She bends her voice like a flexible bow. Now lets it shake, now widens it, now brings it into focus. Now she lengthens its pace, now turns it on itself, now splits its line . . .” It seems rude to pick only one section from this short opera; however, the siren’s song, Follow Love Follow Love, which lulls the captured Ruggiero to sleep, glows with a special magic and follows me everywhere.

Puccini: Senza mamma from Suor Angelica
Senza mamma has resonated in my life since childhood. I first heard the song in Inspector Morse (episode 1 of series 5 – I was 10). It was a weekend treat to stay up late with my parents watching the poignant, elegiac storytelling. The unfolding dramas, Morse’s sorrowful nature and his obsession with opera got all mixed in with my feelings about family, love and loss. So when I came across a recording of Senza mamma soon after leaving home, those opening chords startled me with deep recognition and memory. I didn’t know what the words meant, but I felt enormous emotion. Then I realised that “senza mamma” meant “without a mother”. My mother had recently died, and I felt the grief in the song as though it were my own. Later, when I began to work in opera and picked up some Italian, I found myself understanding the first line: “Senza mamma, o bimbo, tu sei morto” (“without a mother, little baby, you died”). It’s a song that seems to contain all the sorrows of every parent and every child, every love and every death. Watching that Morse episode again recently, I saw that Senza mamma was sung by Janis Kelly. I have the honour of working with Janis for the third time this summer, and now I discover that it is her voice that has haunted me for all these years – perhaps it’s true that everything returns to us in time.

Claudio Monteverdi: Pur ti miro, pur ti godo from L’incoronazione di Poppea
“I gaze at you, I delight in you, I hold you close, I am bound to you, no more suffering, no more death, oh my life, oh my treasure.” Maybe the sexiest and most intimate expression of love and desire in opera? The way the singers finish each other’s phrases, the way their breaths entangle, the outpouring of “yes, yes, yes” worthy of Molly Bloom at the end. All the more remarkable for the fact that it’s sung by the villains who have triumphed in a web of political and sexual intrigue to achieve the heights of lust and power. Monteverdi’s thrillingly amoral Coronation of Poppea was House of Cards before there was House of Cards: it’s a reminder that the villains have all the best tunes, but also that even people whose motives you abhor still pulse with the beat of humanity, and that could be the best way to start understanding how we might defeat them.

Tom Creed is a theatre and opera director. His acclaimed production of Beckett’s Watt with Barry McGovern will be at Project Arts Centre, Dublin, and Pavilion Theatre, Dún Laoghaire, in April, and he will stage the Irish première of Vivaldi’s Griselda for Irish National Opera on a national tour in October.

Debussy: Des pas sur la neige from Prelude Book I
I was introduced to this 14 years ago whilst working on Masks and Faces, a Victorian play. It was played to me by my sound designer (now husband) Darren Murphy. We both work in theatre so will often choose a piece of music that isolates a mood or tone or helps clarify a moment in a scene. In retrospect I can’t imagine why I tried to use it for that play; it was much too delicate for what we needed and in fact was ultimately cut. However, I have used it in a more recent production.

Debussy helped me understand how to work with music in theatre, and how it might combine with words in order to create tension. Beautiful and tentative, the footprints described are not made by a human foot. For me, the piece has the hesitancy of a small animal or bird having their first experience of virgin snow. After a halting start, about two thirds in we can hear the creature gain confidence in this new world in which it finds itself, as begins to recognise its own imprint. There is both delight and fear in that moment.

Unaccountably, it’s irretrievably linked in my mind to MacNeice’s poem Snow. Reading that and listening to this music together is like running hot and cold water on your hand at the same time – it confuses the senses. It somehow places you simultaneously inside and out. “There is more than glass between the snow and the huge roses.” Indeed.

Caitriona McLaughlin is an associate director at The Abbey Theatre

Ellen Cranitch: Music from Phaedra
Ellen Cranitch, classically trained but with impeccable trad and jazz credentials, was the obvious composer for the collaboration with Hilary Fannin that gave Rough Magic its production of Phaedra – a new version derived from the Greek myth, Racine’s play and elements of the opera by Rameau. The story of transgressive love spans the centuries, and crosses many physical and philosophical boundaries, but Hilary and Ellen were intent on drawing it – linguistically and musically – into contemporary Ireland, with all its grotesque venality. What they created was a work as much characterised by its beauty as its emotional violence. The music – played by a stunning six-piece band (led by Ellen) – wound itself around the narrative like a serpent, three singers representing both the human psyche and the vengeful gods. It ranges from the elegiac and melancholy to full baroque majesty (with an essential thread of Argentinian tango). To achieve a musical and dramatic synthesis of all these elements was an extraordinary achievement. To our great delight, the work – comprising the text and key elements of the score – will be published later this year by Methuen as part of an anthology of Rough Magic new plays.

Lynne Parker is artistic director and co-founder of Rough Magic

Director’s Choice is at the Royal Irish Academy of Music in Dublin on Sunday April 14th at 3pm. Tickets: €10 and €6 from riam.ie