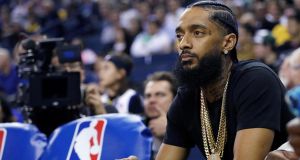 The Grammy-nominated rapper Nipsey Hussle was fatally shot outside his clothing store in the Hyde Park neighbourhood of Los Angeles on Sunday.

All three were shot in the car park outside the Marathon Clothing store, according to Lt Chris Ramirez of the Los Angeles police. He said police were still piecing together what happened, and they do not have a motive for the shooting, which they are investigating as a homicide. Police believe at least one suspect fled from the scene in a car.

US stars have paid tribute. Rihanna tweeted: “This doesn’t make any sense! My spirit is shaken by this! Dear God may His spirit Rest In Peace and May You grant divine comfort to all his loved ones!”

“My whole energy is just at a low right now hearing this,” the rapper Drake, who collaborated with Nipsey Hussle, wrote on Instagram. He added: “You were a real one to your people and to the rest of us. I’m only doing this here cause I want the world to know I saw you as a man of respect and a don. Rest easy my g.”

At a concert in Buenos Aires, Kendrick Lamar, who is also from south Los Angeles and had collaborated with Hussle, called him “our brother, our warrior, our soldier” and led a moment of silence.

This doesn’t make any sense! My spirit is shaken by this! Dear God may His spirit Rest In Peace and May You grant divine comfort to all his loved ones! 💔🙏🏿
I’m so sorry this happened to you @nipseyhussle pic.twitter.com/rKZ2agxm2a

Just spoke with you the other day on text bro! Telling you how proud I was of you and how I was gone get you to more Laker games next season. Been A Stand Up dude from Day 1. May you rest in PARADISE Young King 👑‼️‼️‼️‼️‼️ This One Hurts Big Time!

Hussle, who was 33, was a supporter of the Los Angeles Lakers basketball team, who posted an online tribute: “Artist. Activist. Angeleno. LA mourns the loss of one of our own, Nipsey Hussle.”

The Lakers star LeBron James wrote on Instagram: “Just spoke with you the other day on text bro! Telling you how proud I was of you and how I was gone get you to more Laker games next season. Been a stand up dude from day 1. May you rest in paradise… this one hurts big time!”

The American footballer and activist Colin Kaepernick paid tribute to Hussle’s community work, writing: “This is so painful! Nipsey Hussle was doing great work for the people. Keep his legacy alive by carrying on his work!”

“Our hearts are with the loved ones of Nipsey Hussle and everyone touched by this awful tragedy,” Mayor Eric Garcetti said in a tweet on Sunday. “LA is hurt deeply each time a young life is lost to senseless gun violence.”

Victory Lap, Nipsey Hussle’s debut studio LP for Atlantic Records, was nominated this year for best rap album at the Grammy Awards, losing to Cardi B’s Invasion of Privacy. News of his death prompted an outpouring of support from musicians and the community in Los Angeles, where Nipsey Hussle was born.

Nipsey Hussle was an outspoken representative of the Crenshaw neighborhood. Mark Ridley-Thomas, a Los Angeles County supervisor who represents south Los Angeles, said Nipsey Hussle “was a father, businessman, entertainer, and inspiration to many”. “We mourn his sudden and tragic passing and send his family our deepest condolences,” he said.

A Los Angeles fixture since the mid-2000s, Nipsey Hussle first drew widespread acclaim in hip hop for his three-part mixtape series, Bullets Ain’t Got No Name. His stage name is a “twist on comedian” Nipsey Russell, according to the Grammy Awards website.

He has collaborated with artists including Snoop Dogg and YG, drawing from the city’s tradition of gangster rap and intricate street-level storytelling. In 2013 Nipsey Hussle created industry buzz by creating only 1,000 physical copies of his mixtape Crenshaw, an independent release that was free online, and selling each for $100 at a pop-up shop. He said Jay-Z bought 100 copies.

“Nipsey was not only one of the greatest artists we worked with but an amazing father and leader in his community,” Nipsey Hussle’s label, Atlantic Records, said in a statement Sunday. “One of the kindest and brightest stars in the universe, he was inspiring to all.” – New York Times, agencies