Carole Nelson on feminism, music and showing the interconnectedness of things 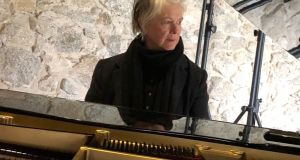 Carole Nelson: “I learned that I’m not invulnerable.”

Carole Nelson is mulling things over in the room of a Georgian house in Dublin. There is a musty bouquet in the air, an open fire burning, a stack of peat briquettes on the hearth. An old burnished piano takes up a corner of the room, and the wall it is closest to houses a collection of children’s toys, mostly old if well-preserved dolls that date back many decades but which are joined by relative newbies such as a Buzz Lightyear and a Minion or two.

There is a strong sense of many lives having been lived in the house and, of course, with particular regards to Nelson, of a musician who has been diligently, quietly advancing feminist activism and LGBTQ rights since she arrived in Ireland from London 35 years ago. In her early 60s, she is a gentle presence, softly spoken yet with a firmness shaped from, among other things, decades of standing her ground.

Her first adult foray into music performance, she recalls, was playing keyboards with a London-based feminist band called The Spoilsports, who performed during a Gay Pride event in Hyde Park in 1980. With London basking in the energetic if increasingly homogenised afterglow of punk rock there was, nevertheless, an air of deep-seated vitality about the city, with, she adds, “Rock Against Racism and Rock against Sexism” gigs foreshadowing even greater awareness about such issues. Badges pinned on clothes were the declamatory, up-against-the-wall indicators: Eat the Rich, How Dare You Presume I’m Heterosexual! and Gays Against Fascism clinked against each other. Heady times, surely? Well, yes, but then again…

“In certain ways, some of that has been lost,” she reflects. “In others, you see it resurging. There’s a buoyancy around now in people much younger than me...” Way back then, she says, “feminism was kickin’ off, so all of that was going on, too. In terms of feminism, what we were certainly fighting for has become the middle ground, even though it might not be perfect in its reach or effectiveness.”

Nelson arrived in Dublin in the mid-1980s, proudly, vibrantly lesbian. I ask her did she encounter any number seriously below Ireland’s traditionally glorious 100,000 welcomes. She found herself, she smiles, “in a very open and generous gay community, but it also extended into the whole alternative musicians’ community. I never had any problems.”

And matters have changed extraordinarily so, she relates. “I came up to Dublin yesterday on the train with my partner. She has a travel card, so I can travel with her, and the train guard asked to see the card to check if we were married. He then told us all about the diversity training that staff undertake. Something like that would have been unthinkable 30 years ago.”

Music observers, of course, will know Nelson from her long-standing time in Zrazy. Along with Maria Walsh, the duo for a time captured the market in hi-energy pop/funk/jazz when it was neither fashionable nor profitable. Lately, however, in parallel with her work in Zrazy, Nelson has been taking a much more reflective route to self-expression. Her 2017 solo debut album, One Day in Winter – released under the Carole Nelson Trio moniker  – brought her airy, soothing piano playing to the fore, with the Irish Times jazz critic, Cormac Larkin, comparing it to the “European piano trio tradition of Tord Gustavsen and Marcin Wasilewski. ”

The trio’s forthcoming album, Arboreal, continues this in a contemplative, supple manner. As on the debut, Nelson’s accompaniments are Cormac O’Brien (bass) and Dominic Mullan (drums), each of whom allows each other space for, and to intertwine with, a subtle kind of improvisation. Like the debut, also, there is an outline concept, and although each album title is a palpable spoiler to the plot, there are nonetheless serene surprises.

“There’s a regular walk I take, about a mile away from where I live,” she explains. “It’s a walk I like, and I thought it would be a good way to start a theme of being in a forest. And then a friend of mine, an ecologist and artist, mentored me in the ways of how to address climate change, how artists can work within that, what can we do with it. So that crept into the album. I read more about it, and I have to say that when I first started the project people were reluctant to talk about it. Now there is no need whatsoever to feel remotely evangelical about it because climate change is everywhere.”

From a listener’s point of view, Arboreal fits into an impressionistic, minimalist piano area where the likes of Bill Evans, Max Richter and Akira Kosemura calmly high-five each other as they swirl around the ether. When it came to writing the songs, I ask, what did she ultimately want to achieve? The overall result, Nelson replies, was to get across a sense of place.

“I was inside the pieces of music in different ways. I would go for my morning walk in the woods and think why would I want to write music when I can hear birds singing, the wind in the trees, the sounds of the river? What is my human contribution to this environment? That was it, really – to show the interconnectedness of things and additionally to show what happens with three improvising jazz musicians when they play together.”

The new album is, I suggest, a collection of instrumental pieces borne of maturity, but Nelson doesn’t necessarily agree. “I wouldn’t like to say that because I have certainly been educated and inspired by people a lot younger than me. I’m probably out of this life before any of the proverbial shit hits the proverbial fan, but I feel a moral sensibility for myself to at least make an effort.” She will continue to do just that, she affirms. “I’m sure there’ll be more because I feel I’m on an unending path of creativity.”

And this path she is on – is she still discovering aspects about herself that inform her life and work? Nelson admits that only very recently she did. “It was kind of shocking because I didn’t know it was there, but after I had recorded the album I felt quite depressed and that the end result came down to very little. When I expressed this to a friend, she said it was a classic example of imposter syndrome, and that it’s very common for women. It is often with high achievers that you actually think you haven’t done anything.”

Being able to put a name on it made her realise she could “acknowledge it, that once I could stand over the work then it was fine. And, of course, the work is valid. The irony is that I spend a portion of my life teaching students, and so much of what I impart is about self-belief and self-confidence. To discover that chink in myself was revelatory. So to answer your question, I learned that I’m not invulnerable.”

Carole Nelson on creativity being critiqued

“The questions I always have to ask myself are can I stand over my work and can I listen to this? If the answers are yes, then there’s a certain kind of immunity and an acceptance that other people’s tastes are, quite simply, other people’s tastes. That doesn’t make it any lovelier if someone says the work is terrible, but then any artist is always going to hear their limitations at any given moment in time. I remember being much younger, when Zrazy did a gig in the Olympia, in Dublin, and it was reviewed. The person made a very critical point and I completely took the criticism on board, so I do think there’s a value in terms of critics or criticism that might be made, or even in knowing your limitations. The criticism was about a song I wrote in the Aids era – that it was way too accusatory. The reviewer described it as ‘right-on cant’, and while that really hurt, I knew it was true. And I never did anything like that again.”